Maneuvering target tracking has been widely used in many applications, such as aircraft surveillance [1,2], road vehicle navigation [3,4] and radar tracking [5,6,7]. Because of the complexity of maneuvering target motion, the single model structure is not appropriate for tracking maneuvering targets. Therefore, the multiple-model structure is adopted. A number of multiple-model techniques have been proposed, such as multiple model (MM) methods [8], optimization of the multiple model neural filter [9], the interacting multiple model (IMM) algorithm [10,11], and other algorithms [12,13]. In these multiple model algorithms, the IMM algorithm proposed by Blom and Bar-Shalom [10,11] is the most popular algorithm. In the IMM algorithm, the target model is selected among a set of models via the control of a Markov chain and the final estimate is obtained by a weighted sum of the estimates from the sub-filters of different models. The conventional IMM algorithm combines multiple models with a linear filter to estimate the target motion state. Because of its excellent compromise between complexity and perfor, the IMM [8,14] algorithm has been widely used in the field of maneuvering target tracking [14,15,16]. However, in the conventional IMM algorithm, the Kalman filter only obtains high precision for linear Gaussian systems. However, most modern systems are nonlinear and the linear IMM algorithm cannot directly deal with nonlinear systems. Thus, the research of nonlinear IMM is paid more attention and is a popular topic in maneuvering target tracking field. It is different from linear IMM theory based on the linear Kalman filter; the performance of nonlinear IMM algorithms depends on the selected nonlinear filters.
Nowadays, the study of nonlinear filter algorithms has been paid a great deal of attention by researchers. It is well known that the extended Kalman filter (EKF) [17] is widely used among the proposed nonlinear filtering algorithms. The basic idea of the EKF is to linearize the measurements and state models by first-order Taylor series expansion. However, it is difficult to get the Jacobian matrix of nonlinear function in many practical problems. As a result, the performance of the EKF may degrade rapidly. To solve this problem, scholars have proposed derivative-free alternatives such as the unscented Kalman filter (UKF) [18,19], the central difference Kalman filter (CDKF) [20] and the Gauss-Hermite Kalman filter (GHKF) [21], etc. These algorithms mentioned above use a set of deterministic sampling points and weights to approximate the Gaussian integrals, which are more accurate than the EKF. However, the search for more accurate filtering algorithms is continuing. In recent years, the cubature Kalman filter (CKF) [22,23] has been of increasing interest for high-dimensional state estimation. This filtering algorithm approximates the weighted Gaussian integrals according to the Bayesian theory and the third-degree spherical-radial cubature rule.
To further improve the estimation accuracy of CKF, the fifth-degree CKF (5thCKF) is proposed in [24]. However, the computational cost of the 5thCKF increases rapidly with the increasing of the state dimension. Recently, Wang et al. [25] have proposed a new class of CKF algorithms based on the spherical simplex-radial (SSR) rule, which can improve accuracy of the CKF with lower computational costs in high dimensional nonlinear system. Specially, the fifth-degree spherical simplex-radial cubature Kalman filter (5thSSRCKF) proposed in [25] has a higher estimation accuracy than 5thCKF. Therefore, we choose the 5thSSRCKF as the filtering algorithm in the IMM framework, and propose the interacting multiple model fifth-degree spherical simplex-radial cubature Kalman filter (IMM5thSSRCKF) algorithm for maneuvering target tracking of nonlinear system. Simulation results show that the IMM5thSSRCKF exhibits better performance than the interacting multiple model unscented Kalman filter (IMMUKF), the interacting multiple model cubature Kalman filter (IMMCKF) and the interacting multiple model fifth-degree cubature Kalman filter (IMM5thCKF) [26] in terms of accuracy and switching response.
The remainder of this paper is organized as follows. The fifth-degree spherical simplex-radial cubature Kalman filter is briefly reviewed in Section 2. The whole procession of IMM5thSSRCKF used in target tracking problem is developed in Section 3. Simulation results of a maneuvering tracking problem and performance comparisons are presented and discussed in Section 4. Finally, the conclusions are provided in Section 5.

As can be seen from [27], the spherical integral can be approximated by the transformation group of the regular n-simplex. The fifth-degree spherical simplex rule with quadrature points is given by:where the surface area of the unit sphere is . The points sets of and are given by:where the vector elements of is defined as:

The radial integral can be calculated by the following moment matching equation:where is a monomial in r, with l an even integer. The left-hand side of Equation (8) is simplified as with . In order to achieve the fifth-degree algebraic precision, we make the radial integral R is exact for l = 0, 2, 4. For the fifth-degree radial rule , we can obtain the moments’ equations as:
By solving Equation (9), the points and weights for the third-degree radial rule are given by:

By using Equations (3), (4) and (10), the fifth-degree spherical simplex-cubature rule can be formulated as:
The steps of 5thSSRCKF algorithm for the nonlinear system can be found in [22,25].

The initial condition for each model can be obtained from the state estimate and covariance at time . The mixed initial state of model at time and its corresponding covariance are computed according to: where r denotes the number of interacting models, and and are the prior state estimate and corresponding state error covariance of model in the previous step, respectively.
The mixing probability at time can be given by:where , represents the model probability of the mode i at time k−1, and is the probability of a transition from model i to model .

Using the initial mixing state and the covariance of the interacting step as the input of each filter at time . Then, the new state of model j and covariance of model can be updated by Equations (14)–(20).

The evaluation of cubature points in the mechanism of state one-step prediction and the propagated cubature points in the mechanism of state one-step prediction can be obtained by the following equations:where is the square root factor of , and is the estimated error covariance of model at time . is the matrix with a set of vector, and the corresponding weight matrix is . The fifth-degree simplex cubature points and the corresponding weights are as follows:where n represents the dimension of state vector; the point sets of and are given by (5) and (6).
The predicted state and predicted error covariance can be computed using the cubature transformation as:where the number of points L is , and denotes the system noise covariance matrix.

A. Computing the likelihood function at time k

B. Updating the mode probability at time k

The mode probability at time is computed by the following equation:

Finally, the state estimate and corresponding covariance are obtained by the model-conditional estimates and covariances of different models:

The simulation scene is designed as follows. The sampling interval is T = 1 s and repeats 100 times. The target moves in different state for five periods. The initial position is (15,000 m, 1000 m) and the target starts at 1 s with the velocity (−180 m/s, 200 m/s). From 1 s to 20 s it has motion at constant velocity; from 21 s to 70 s it turns right with ; from 71 s to 120 s it has motion at a constant velocity; from 121 s to 170 s it maneuvers and turns left with ; and from 171 s to 200 s it has motion at constant velocity.
The initial estimates are generated from the Gaussian distribution in which the true initial is = [15,000, −180, 100, 200]T. The standard deviation of range measurement noise is 40 m and the standard deviation of bearing angle measurement noise is 7 mrad. The initial model probability is = [0.8 0.1 0.1] and the transition probability is given as:
The root mean square error (RMSE) of the target position at time k and the accumulative RMSE (ARMSE) of estimated position at all times are defined in Equations (33) and (34):where is the number of Monte Carlo runs, N is the total number of sampling points, is the actual value of the target position at time and is the estimated position at time in mth Monte-Carlo. The RMSE and the accumulative RMSE in the velocity and acceleration can be defined in the same way. The performance comparison of the four algorithms are tested 200 times in Monte Carlo simulations.
Figure 2 gives the target trajectory and the state estimation generated from a single run of IMMUKF, IMMCKF, IMM5thCKF and IMM5thSSRCKF. As seen from Figure 2, these four algorithms can track the trajectory of the target.
The RMSEs in position and velocity of the four algorithms are shown in Figure 3 and Figure 4, respectively. It can be seen that the proposed IMM5thSSRCKF performs better than the IMMUKF, IMMCKF and IMM5thCKF algorithms when the target moves with CV. The tracking error of target position of the three IMM algorithms would be almost the same when the target moves at constant velocity. The estimation effectiveness of the IMM5thSSRCKF estimator for tracking a maneuvering target outperform greatly than the other two IMM estimators.
To further evaluate the performance of the four algorithms, the ARMSEs of position and velocity of each algorithm are listed in Table 1. It can be seen from the Table 1 that IMM5thSSRCKF does better in tracking precision than IMMUKF, IMMCKF and IMM5thCKF, while all of them exhibit no error divergence.
The comparisons of CV mode probability of IMMUKF, IMMCKF, IMM5thCKF and IMM5thSSRCKF are shown in Figure 5. The mode transitions occur at t = 21 s, t = 71 s, t = 121 s and t = 171 s, respectively. This figure shows that the IMMUKF, IMMCKF, IMM5thCKF and IMM5thSSRCKF can capture the kinematics of maneuvering when the motion state changes. It can be seen that the mode probabilities of the IMMUKF algorithm are not good at detecting mode transitions. The proposed algorithm and IMM5thCKF algorithm are equally faster at detecting model changes compared with the IMMUKF algorithm and the IMMCKF algorithm.
All the algorithms are implemented on the Intel CoreTM i5-4430 3.0GHZ CPU with 4.00 G RAM. Table 2 shows the number of points and computational time of IMMUKF, IMMCKF, IMM5thCKF and IMM5thSSRCKF for each run. The points of IMMCKF as well as IMMUKF differ only by one point. As shown in Table 2, the computational time of the algorithms is approximately proportional to the number of points. It is obvious that the IMM5thSSRCKF algorithm has a slightly lower computational cost than the IMM5thCKF due to the different cubature rule. Although the computation complexity of IMM5thSSRCKF algorithm is larger than IMMUKF and IMMCKF, it can be remedied by more high-speed computer technology.

All authors were involved in the study presented in this manuscript. Hua Liu provided insights into formulating the ideas and wrote the original manuscript of the paper. Wen Wu reviewed the manuscript and provided scientific advising to this study. 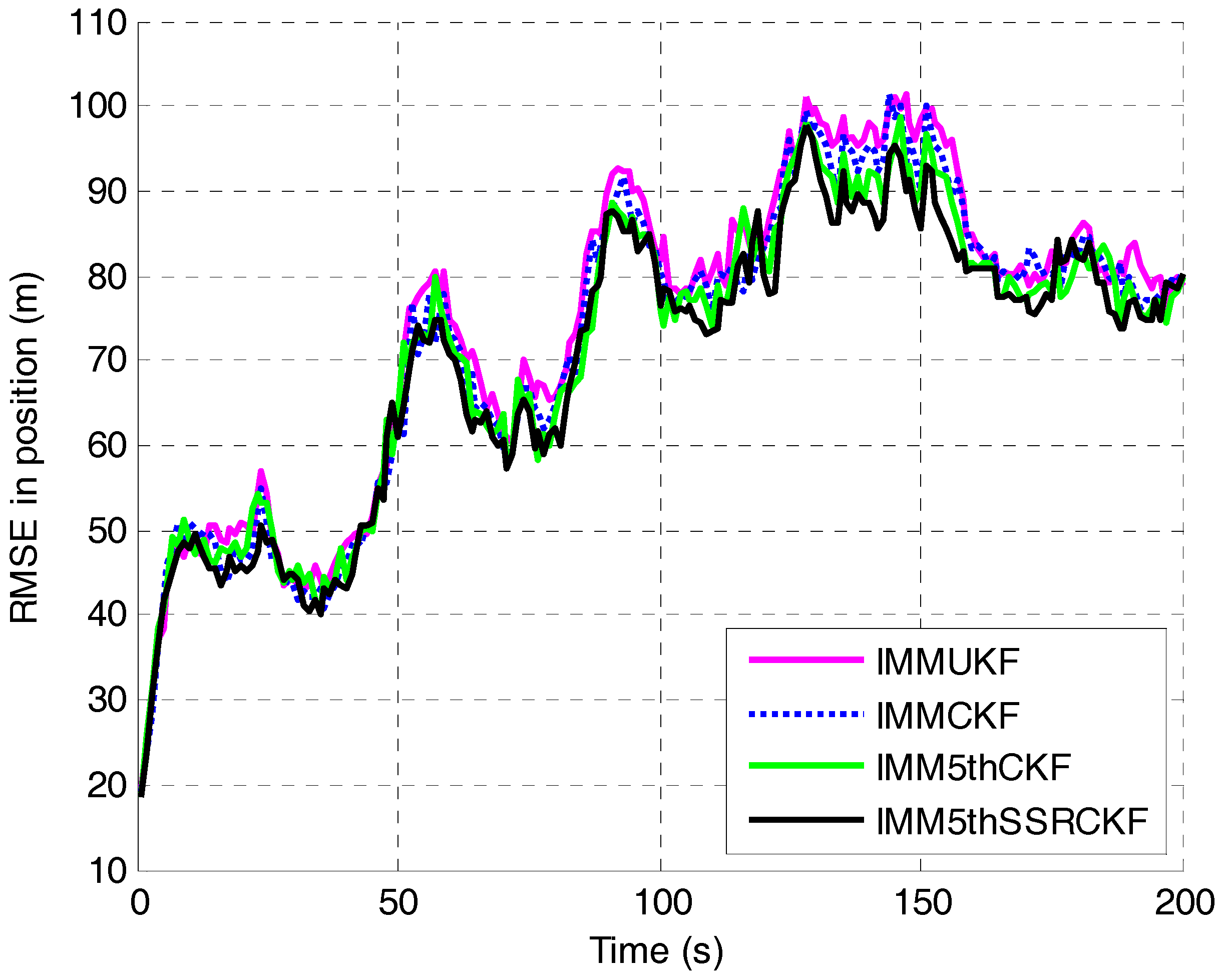 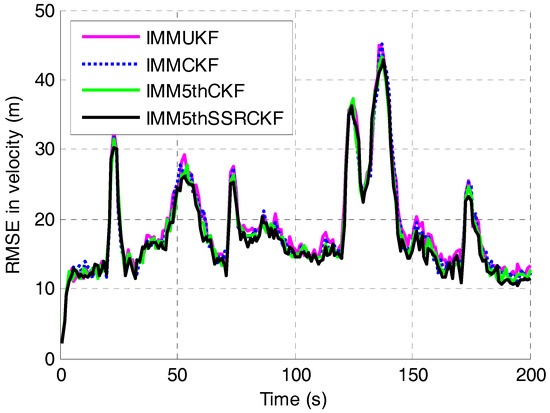 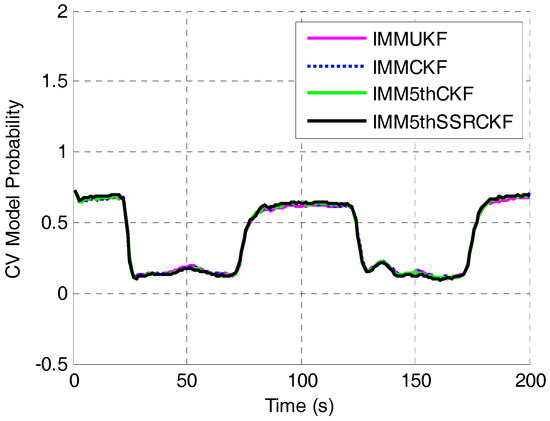 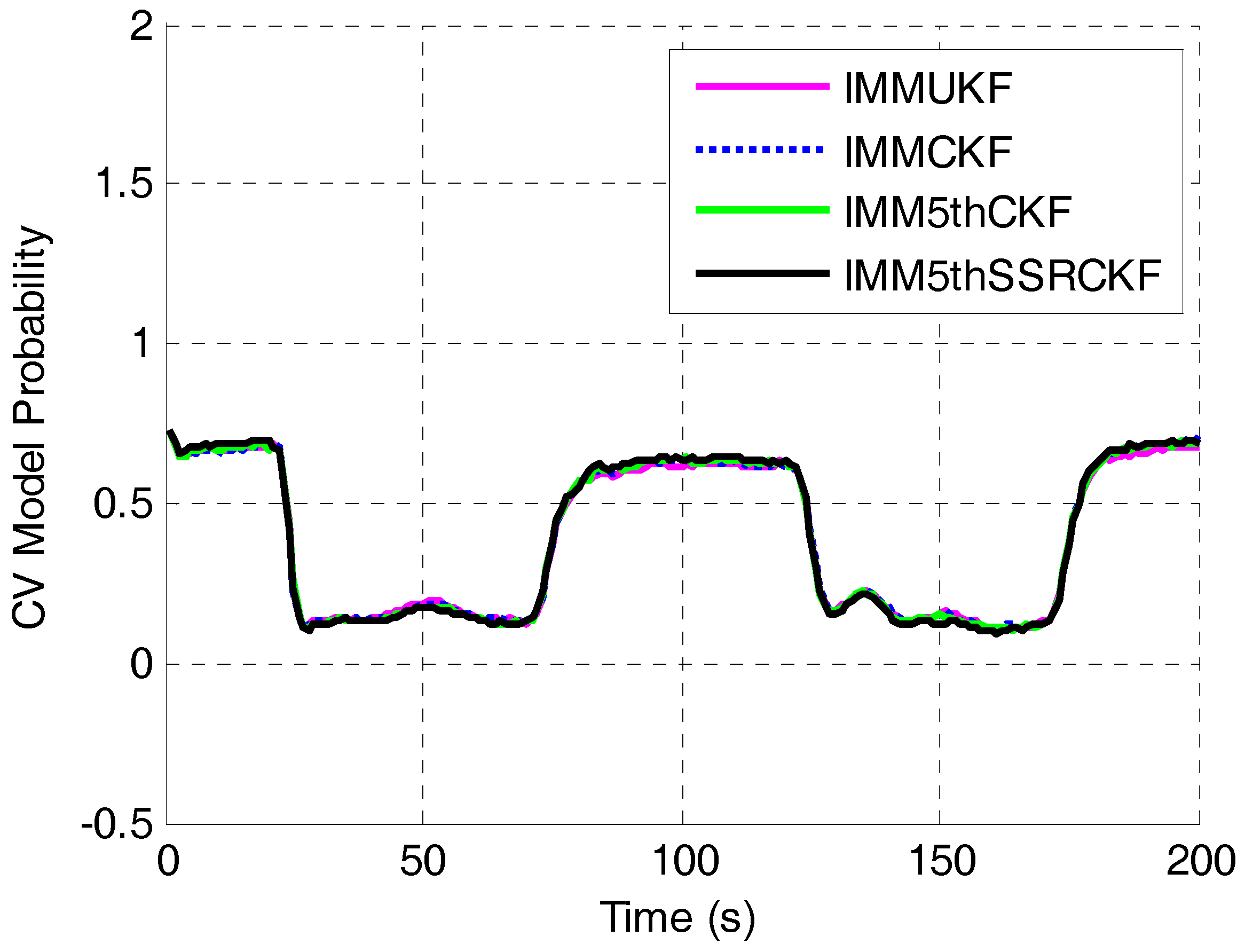