At present, it is difficult for the commonly used high-impact excitation system to produce pulse signals with a pulse width over 300 μs, and it cannot be calibrated for high-g accelerometers with low resonant frequencies. Therefore, we develop a quasi-static calibration testing system for high-g accelerometers. As shown in Figure 5, a gas gun is used as the loading equipment to conduct quasi-static calibration of the high-g accelerometer assisted by a laser interferometer.
The calibration system in our lab is composed of an air gun, projectile, test component, and laser interferometer. The air gun is a one-stair air gun which is composed of a high pressure chamber with a volume of 0.036 m3, valve, silencer, liquid gas buffer device, launching canal with 6.2 m length, and 100 mm caliber. The collision surface of the projectile which can be filled with soft materials, such as felt, is made from steel, and other parts are made from aluminum alloy. The test component is composed of a collision object, calibrated accelerometer, and guiding cylinder. A diffraction grating is glued on the surface of the collision object.
The working principle of the whole calibration system is as follows: gas is injected into a high-pressure gas chamber and the valve is opened after the preset working pressure is reached. High-pressure gas is used to promote an accelerated movement of the projectile along the launching tube of the gas gun; driven by the high-pressure gas, the projectile collide with an object at a speed of 30–100 m/s. During collision, the collision object (installed with a high-g accelerometer) gains the accelerated speed and moves forward, along with the projectile, until it decelerates and stops under the influence of the liquid gas buffer device. To absorb the remaining energy after the collision, we applied technology similar to the recoil system for guns to construct a liquid gas buffer device which is composed of a large number of small holes using the resistance and energy consumption when the liquid passes through the small hole at a high speed. The laser interferometer measures the excitation acceleration signal through a diffraction grating attached to the surface of the collision object. After being converted by a charge or voltage amplifier, the output of the calibrated accelerometer is recorded in a transient recorder together with the signal output by the interferometer.
According to the method in ISO16063-13, the Doppler signals output by the laser interferometer can be used to determine the impact acceleration. As compared with the output of the calibrated accelerometer, its impact sensitivity can be determined by: where denotes the sensitivity of the high-g accelerometer; denotes the peak output of the high-g accelerometer; and is the peak value of the impact acceleration produced in the interferometer.

4.1. Influence of the Collision Object’s Mass on Excitation Pulse

A 988 piezoelectric high-g accelerometer from 204 institute has been used in this calibration system with a central compressed structure. Its range is within 105 g with an inherent frequency of 125 kHz. Its first resonant frequency is near 40 kHz, as per the technical data. According to Equation (12), when the given calibration error is 3%, the minimum width of the excitation pulse should be 429 µs. During the calibration test, the mass of the collision object is 2.84 kg, the diameter of the collision contact surface is 50 mm, and the thickness of the felt pad is 50–70 mm. The excitation acceleration signals of different amplitudes generated by the projectile’s collision against the collision object at different speeds are adjusted by controlling the pressure inside the high-pressure gas chamber. The accelerometer is calibrated eight times within a quarter of the measuring range (Table 5 shows the detailed calibration data). The Doppler signals output by the laser interferometer and acceleration signals output by the calibrated accelerometer are recorded simultaneously in a transient waveform recorder. A Kistler Type 5011B is used as the charge amplifier (Winterthur, Switzerland).
Figure 11 shows the Doppler signal by the laser interferometer and presents the test curve of the eighth calibration test in Table 5. The acceleration signal gained by Doppler signals output (Figure 11), namely, the excitation signal of the calibrated sensor, is shown by the solid line in Figure 12, and the peak acceleration 25,410 g. Meanwhile, the dotted line in Figure 12 demonstrates the signal output by the calibrated sensor, where the peak value 13,213 pC. According to Equation (13), the ratio of the peak values of these two signals is equal to the impact sensitivity in the table. The wide pulse calibration method avoids the filtering process of the response signal and improves the accuracy of peak sensitivity calibration.
The calibration data in Table 5 are fitted by the least squares method, and the fitting curve is shown in Figure 13. If the fitting formula of the peak sensitivity is , then the response error of the calibrated accelerometer is shown in Table 5.
When the pulse width of the excitation signal is greater than the minimum width determined by Equation (12), the calibration error of the accelerometer is less than 3% (see Table 5).
As shown in Figure 12, the trend is nearly the same for response and excitation signals. The difference between two signals is due to the fact that the two signals come from different systems, resulting in different system characteristics. The measured signal from the laser interferometer is acceleration of the rigid body collision, without relation of the collision structure. Response acceleration of the collision object is the sum of the rigid body signal and the structure resonant signal. The pulse excitation signal with minimum width can only possibly reduce the response of the mount structure, but cannot be completely offset.

By exploring the problem that impact sensitivity cannot be obtained accurately due to resonance during the quasi-static calibration of high-g accelerometers, this study contributed the following:

This work is supported by grants from the National Natural Science Foundation of China (No. 51275488), the Foundation of Science and Technology on Electronic Test and Measurement Laboratory, China (No. ZDSYSJ2015001). 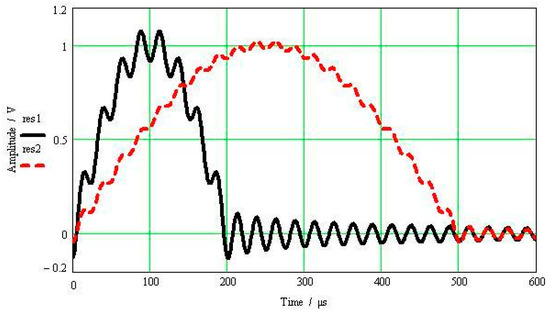 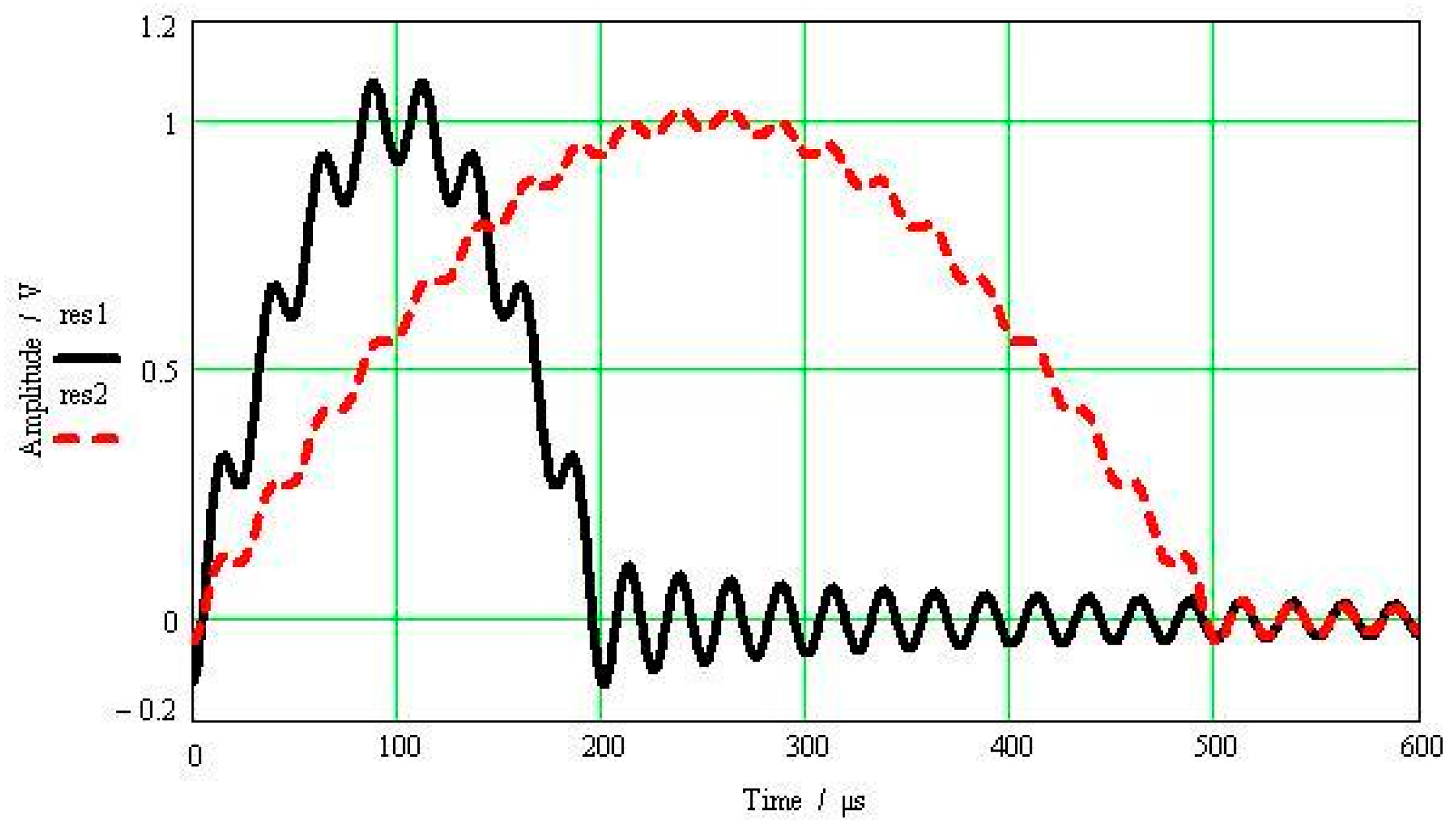 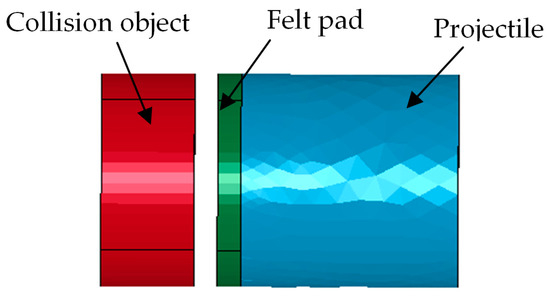 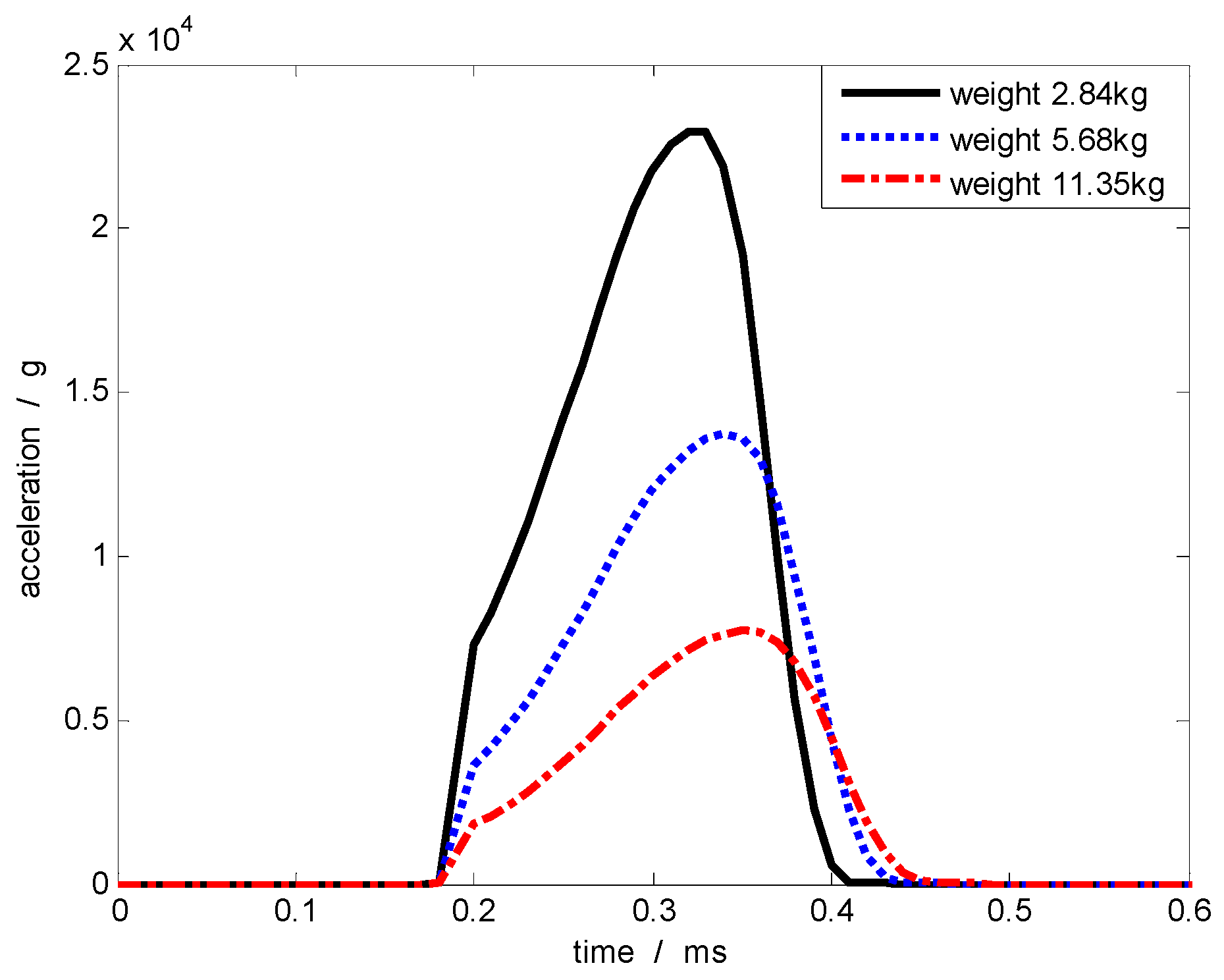 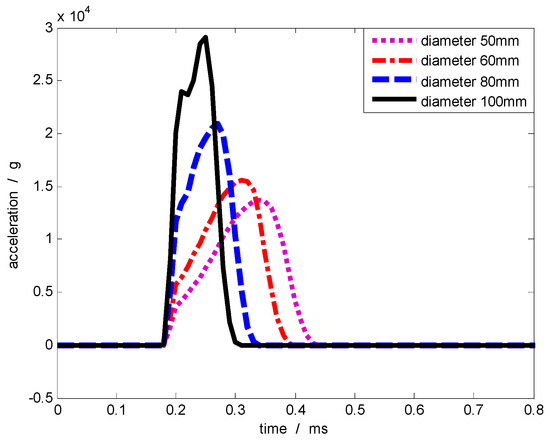 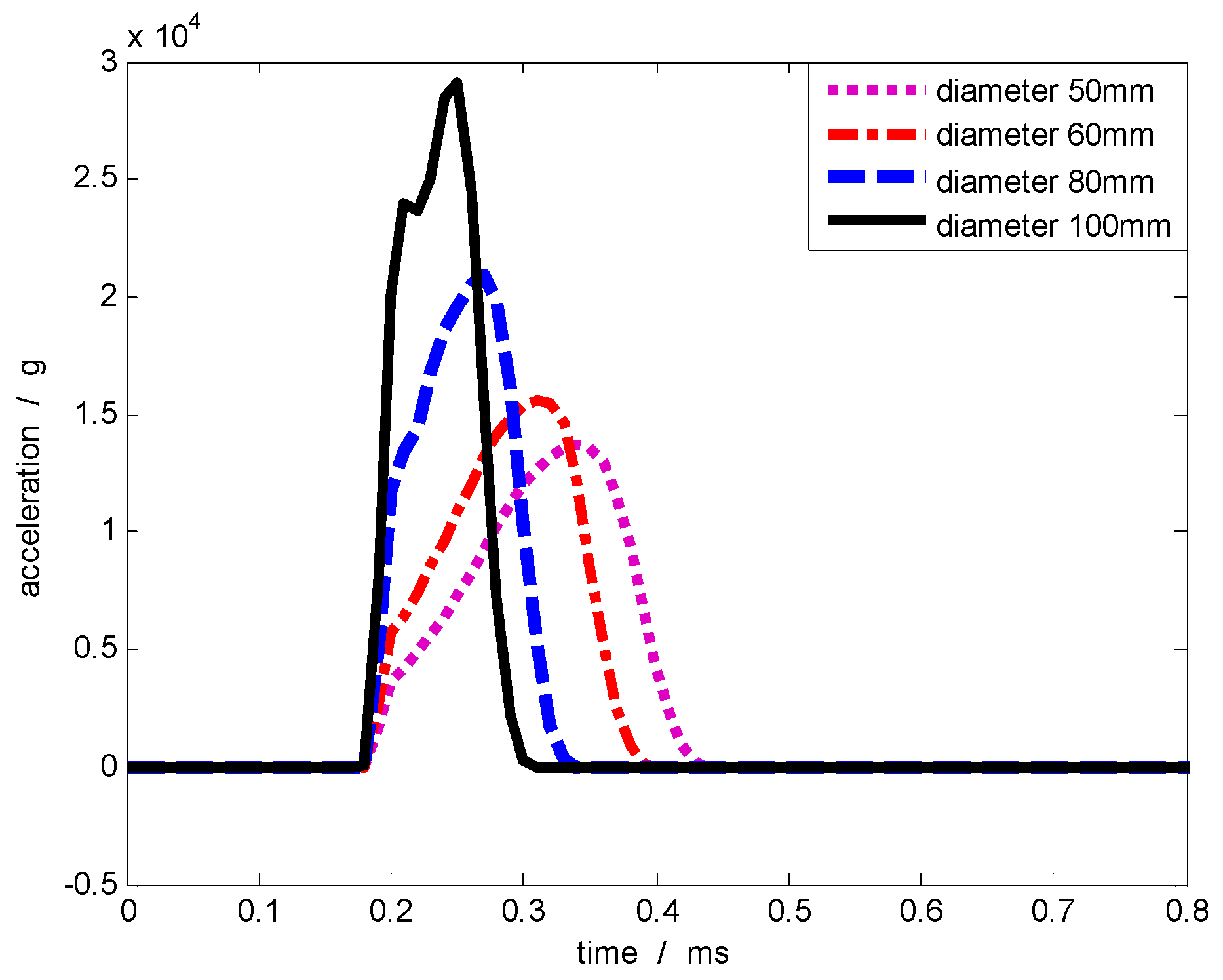 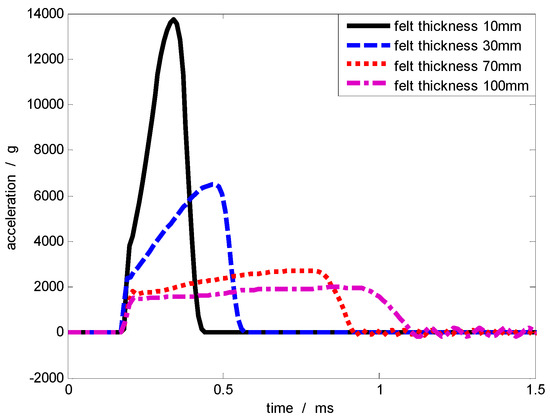 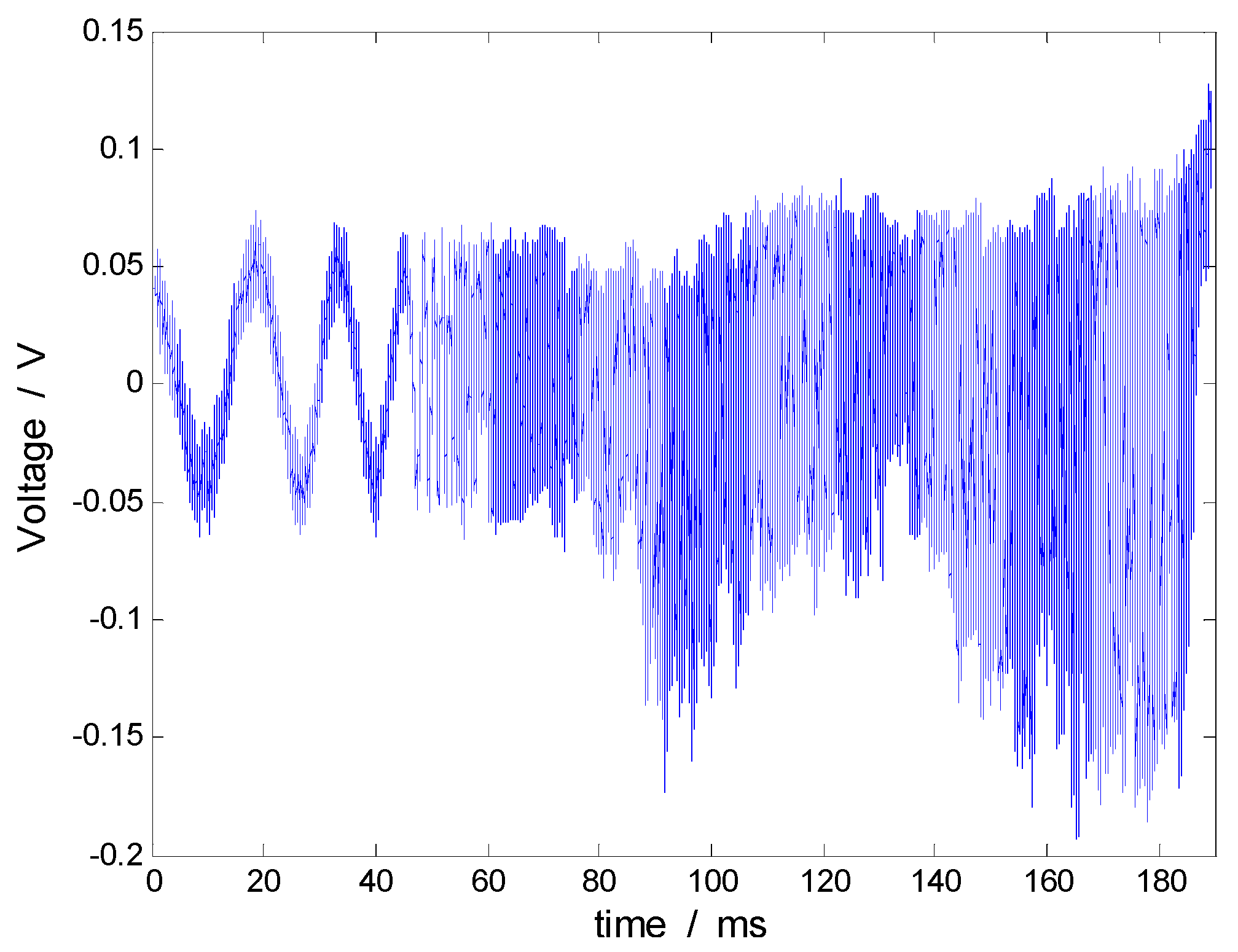 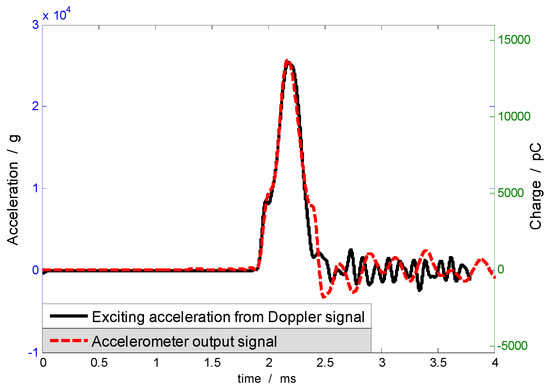 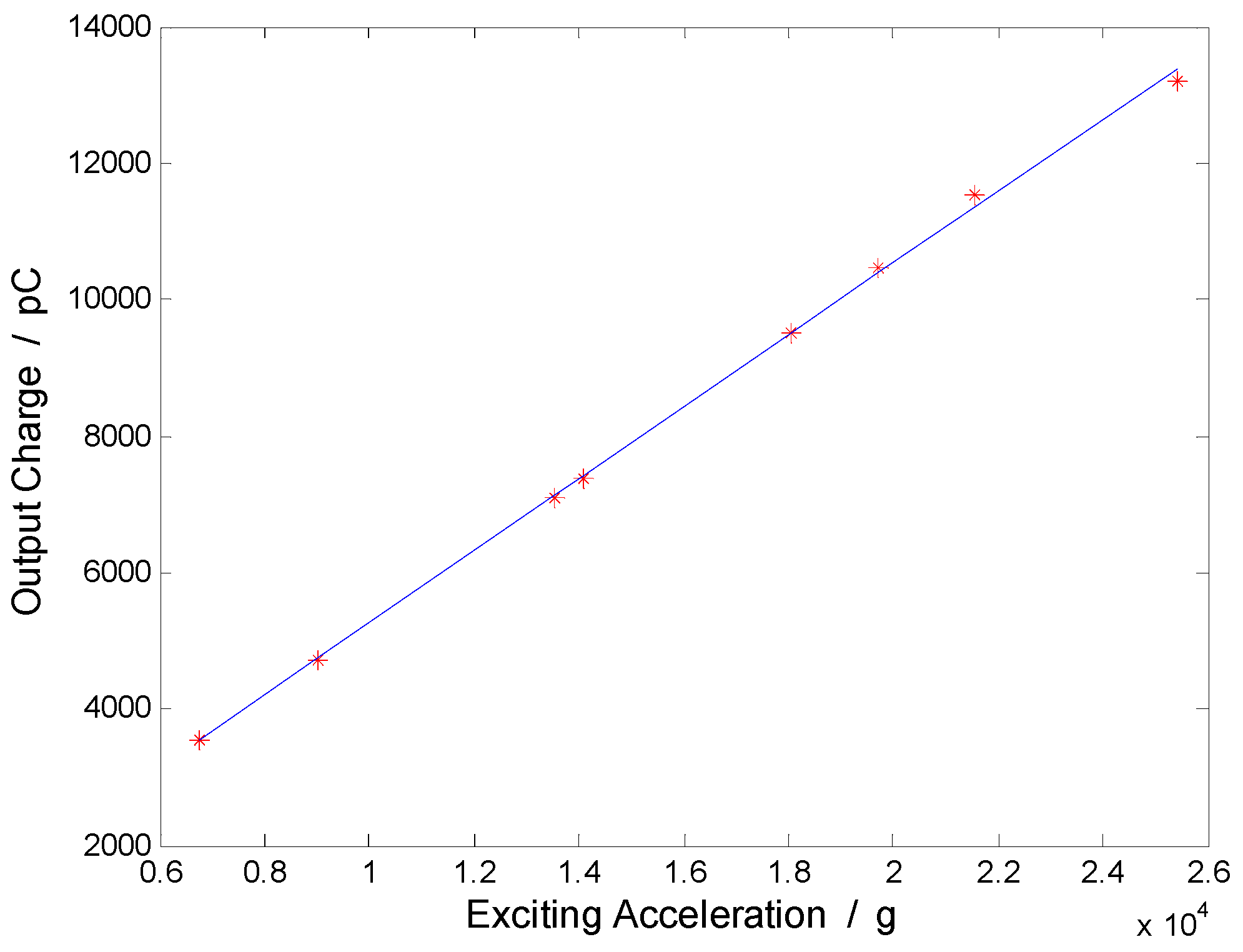