:
This study analyzes the capabilities of a LiNbO3 whispering gallery mode microdisc resonator as a potential bolometer detector in the THz range. The resonator is theoretically characterized in the stationary regime by its thermo-optic and thermal coefficients. Considering a Q-factor of 107, a minimum detectable power of 20 μW was evaluated, three orders of magnitude above its noise equivalent power. This value opens up the feasibility of exploiting LiNbO3 disc resonators as sensitive room-temperature detectors in the THz range.
Keywords:
bolometer; THz; WGM; microdisc; LiNbO3

Nowadays THz applications are emerging as a new frontier of technology. Several current studies are concentrating on both generating [1,2,3,4,5] and detecting [6,7,8,9,10] THz radiation. The detection systems mainly involve two different techniques, namely coherent and incoherent [11]. The former uses a heterodyne detection scheme where the signal coming from local oscillator (LO) is mixed with the signal being detected. An important parameter for the mixer devices is the electric field quadratic nonlinearity. Frequently used mixers are superconductor-insulator-superconductor (SIS) tunnel junctions [12], forward biased Schottky barrier diodes (SBDs) [13], superlattices (SLs) [14] and semiconductor and superconducting hot electron bolometers (HEBs) [15]. The main advantage in using heterodyne detection is that both the frequency and phase information are preserved. Where sensitivity is more important than spectral resolution, direct detection can also be used, including devices such as THz antennas [16,17] and thermal detectors, such as Golay cells [18,19], pyroelectric detectors [10] and bolometers [20]. The electro-optic effects induced in LiNbO3 and other birefringent crystals are widely studied, and several detectors have already been developed [21,22]. One of the main disadvantages of LiNbO3 is its high absorption coefficient in the THz regime, limiting the detection sensitivity. Furthermore, to obtain strong electro-optic effects, applications mainly involve the detection of high peak THz pulses. In this study we propose a new technique for THz sensing by means of a LiNbO3 microdisc resonator. Besides its good sensitivity to high peak THz pulses, its small dimensions are extremely sensitive to temperature shifts due to CW (continuous wave) THz absorption as well. Whispering gallery mode (WGM) microresonators are optical resonators characterized by a high quality factor, up to 1011 [23], and, therefore, they are suitable for high-precision sensing applications [24]. LiNbO3 microdiscs were already widely used for thermal and electro-optic applications [25,26]. Like MgF2 [27,28], its birefringent behavior permits extremely fine temperature measurements and stabilization by exploiting the different responses of the two polarization modes, transverse electric (TE) and transverse magnetic (TM) [25,29,30]. The choice of the LiNbO3 crystal relies on its higher thermal dependence frequency shift when compared to other crystals such CaF2 and MgF2 [25,28,31]. The possibility of using WGM resonators such as bolometers was already proposed for the infrared (IR) region by Zhu [32] and Ioppolo [33]. The former study was concentrated on the thermal drift in a toroid silica microresonator promoted by the modulation of a CO2 laser. The latter mainly theoretically examined the effect of IR absorption by a liquid-filled hollow WGM sphere resonator due to its thermal expansion. In this work we evaluate the extension of these concepts in the THz domain, proposing an additional application, as pyro-optical detector, to an existent structure [29,30]. In the first part, the thermal response of a LiNbO3 microdisc illuminated by THz radiation is theoretically analyzed. The theory takes into account both the thermal expansion and the thermo-optic effect on the resonance shift. Furthermore, the thermal behavior of the device is studied, as well as its characteristic time, when in close contact with a heat sink. The final sensitivity and noise equivalent power are evaluated, pointing out the system limits.

When compared with other conventional bolometers working at room temperature [15,16,20], the system proposed here has a NEP value two orders of magnitude bigger. However, since the proposed sensor is based on the thermo-optic effect, it will not be affected by electromagnetic interference, as could be the case for the pyroelectric sensor. When compared with Golay cells, the solution proposed here offers a higher dynamic range and the possibility to create a rugged structure which can avoid mechanical interference [41]. Furthermore, conventional bolometers have a small size, below 100 μm [15,16,20], in comparison with the 2 mm diameter of the microdisc. Hence, in case of the microresonator device, it is reasonable to expect a further increase in sensitivity, at least by about two orders of magnitude. Another advantage of a sensor based on WGM microresonators relies on the nature of the optical probe, which involves light having a wavelength that suffers low absorption by the crystal and, therefore, does not interfere with the measurements. It also has to be considered that higher precision could be reached with sensors with higher quality factors on the order of 109 [23,27,28]. Regarding the bandwidth, this study mainly concentrates on the feasibility of WGM-based THz bolometers, considering a stationary solution and the minimum power detectable in these conditions. Nevertheless, it is reasonable to expect a working frequency on the order of KHz, as was demonstrated in a similar study involving CO2 lasers and a microtoroid resonator [32]. From Equations (5), (6) and (8) it is possible to obtain the complete information about the design of the resonator and the optimal choice of materials. Decreasing the thickness of the microdisc down to 100 μm [42] would increase the acquisition rate two orders of magnitude. However, it is worth noting that decreasing h increases the value of following Equation (8). Furthermore, a minor optical thickness will yield to lower radiation absorption. Adding these two effects together, in the regime where , the minimum power detectable, , will be proportional to . Therefore, h cannot be decreased arbitrarily without any impact on . A plot of Equations (5) and (8) of the dependence of the device thickness of and is shown in Figure 5.
Furthermore, the dependence of τ from h found in Equation (5) confirms the choice of the disc geometry instead of the spherical one proposed in [33]. The acquisition rate can be further improved by almost an order of magnitude by using crystals with a lower value of the ratio of ρC/k, as in the case of MgF2 or CaF2 microdiscs [43]. Moreover, it is possible to observe from Equation (8) that increasing the k value will also increase the NEP. It could be necessary, however, to find a compromise, since higher values of k, even if they help reduce the time constant, also decrease the temperature variation ΔT and, therefore, the system sensitivity. In the system proposed here, LiNbO3 was chosen since it provides the highest sensitivity. Furthermore, since LiNbO3 is a polar material, pyroelectric charges can be generated on its surface while the temperature changes due to THz radiation absorption [44]. The corresponding electric field can induce a further shift of the resonance and, therefore, enhance the system sensitivity. Nevertheless, a possible drawback can arise from the long lifetime of those charges, which can induce a baseline shift. A comparison of the values of and obtained from microdiscs made of different bulk material, but having the same geometry and dimensions as the one proposed in this work is shown in Figure 6.
When compared to SiO2, LiNbO3 is more suitable due to its faster response time. Furthermore, the values reported in Figure 6 were obtained considering χ(υ) = 1, and a proper study involving the efficiency dependence of the wavelength and the crystal type should be done.

This study introduced the concept of utilizing LiNbO3 microdisc resonators as room-temperature THz detectors. Since the crystal shows a high absorption in the THz range, its thermo-optical features were investigated in order to obtain a THz bolometer. The chosen dimensions and Q-factor (108) were in agreement with standard values obtained in our lab [29,30]. The resonator was considered in ideal experimental conditions in which one side faced an ideal insulator and the other faced a perfect heat sink. A characteristic time of τ = 0.74 s for the stationary regime was found, and an equivalent NEP value of 9.66 nW·Hz-1/2 was evaluated by considering the thermo-optical fluctuations.
Under these conditions, a minimum detectable power of 2 μW was calculated. This value could be simply improved by employing a microdisc with a higher quality factor or by changing the resonator geometry in order to distribute the radiation mainly in the light-confined mode volume. A Q-factor of the order of 109 [6] could push the detectable power down to 200 nW.

A.C., M.C. developed the theory. S.S., G.N.C. and G.R. helped in the discussion and in the drawing up of the manuscript. S.P. directed the research. 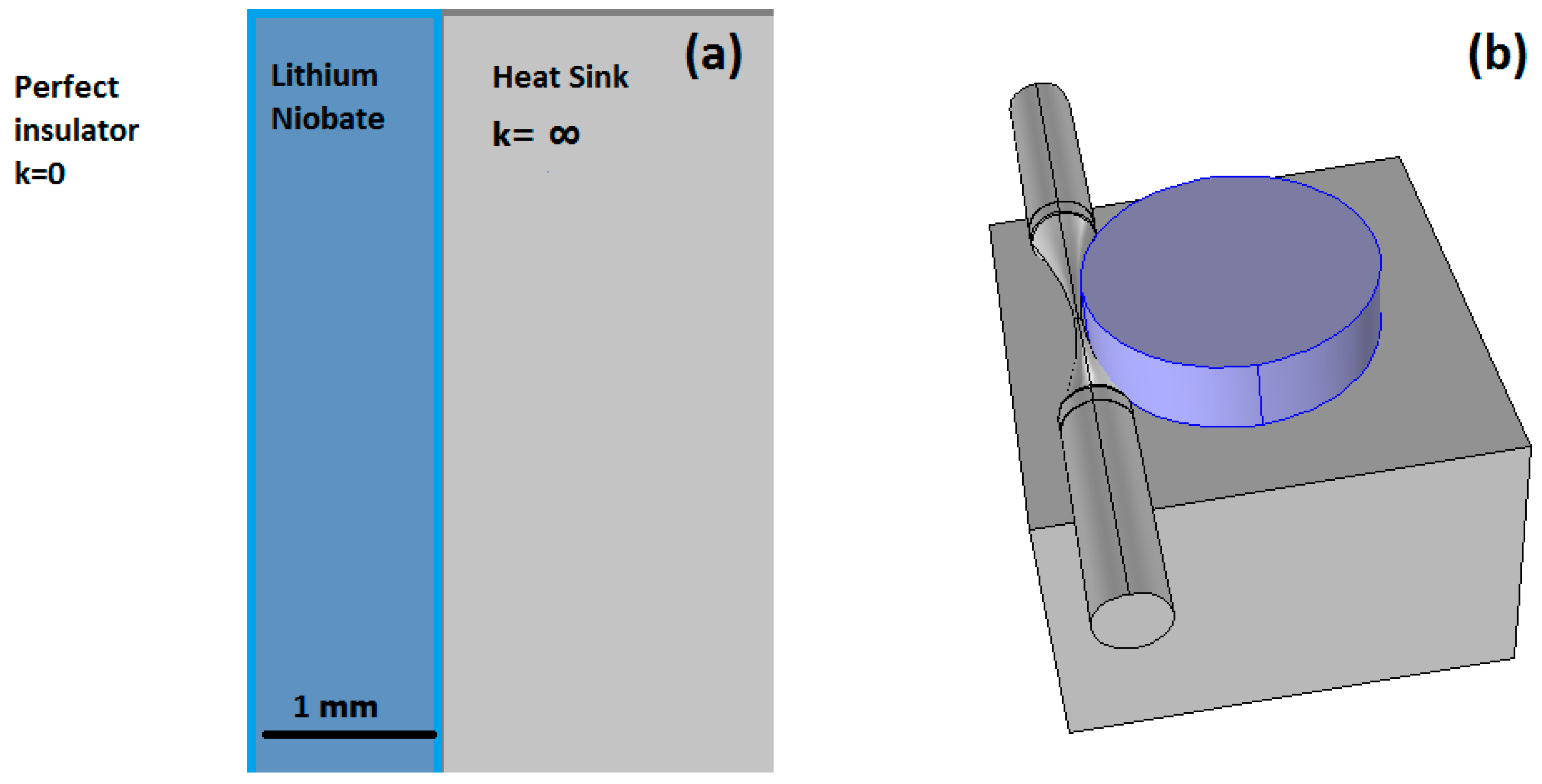 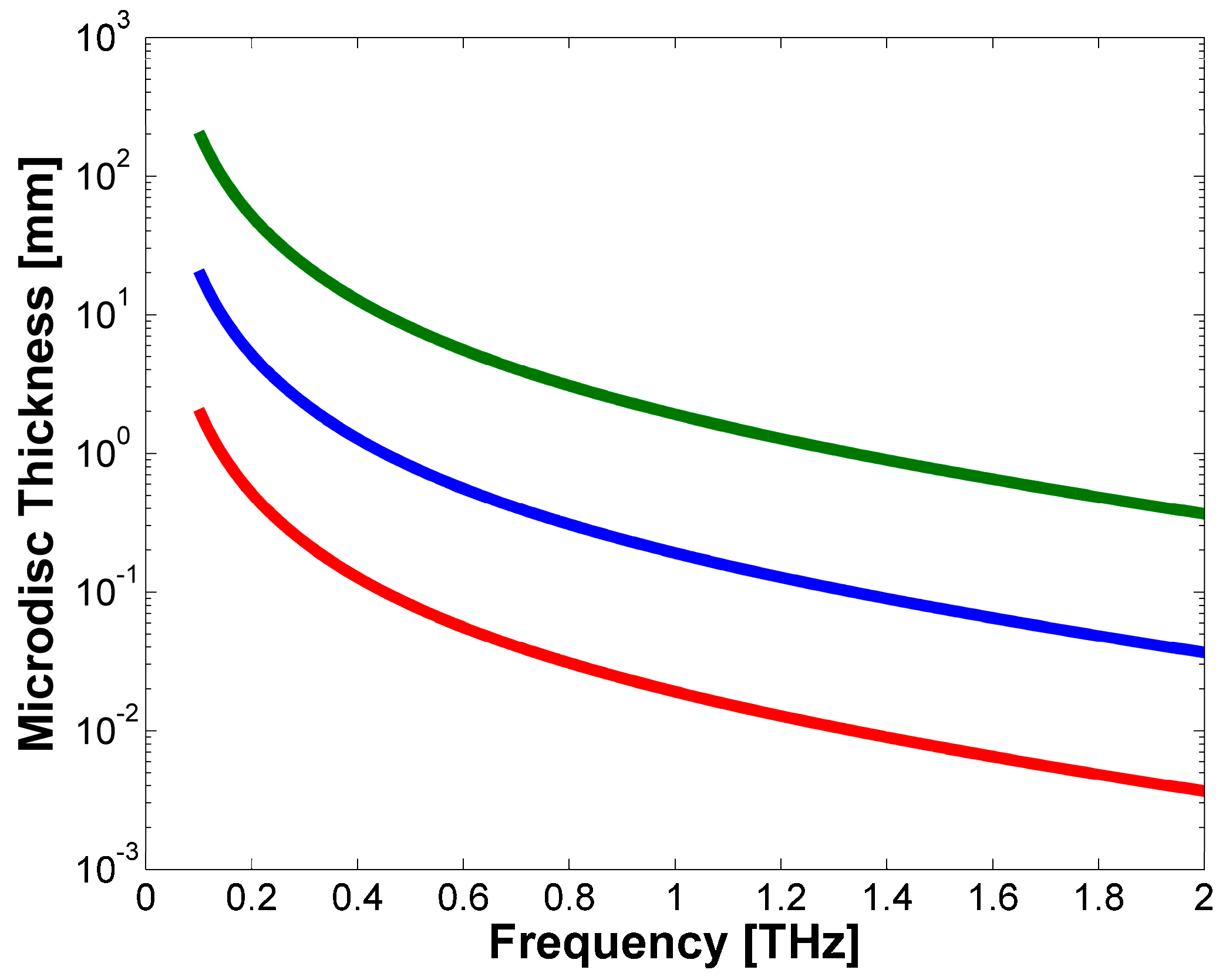 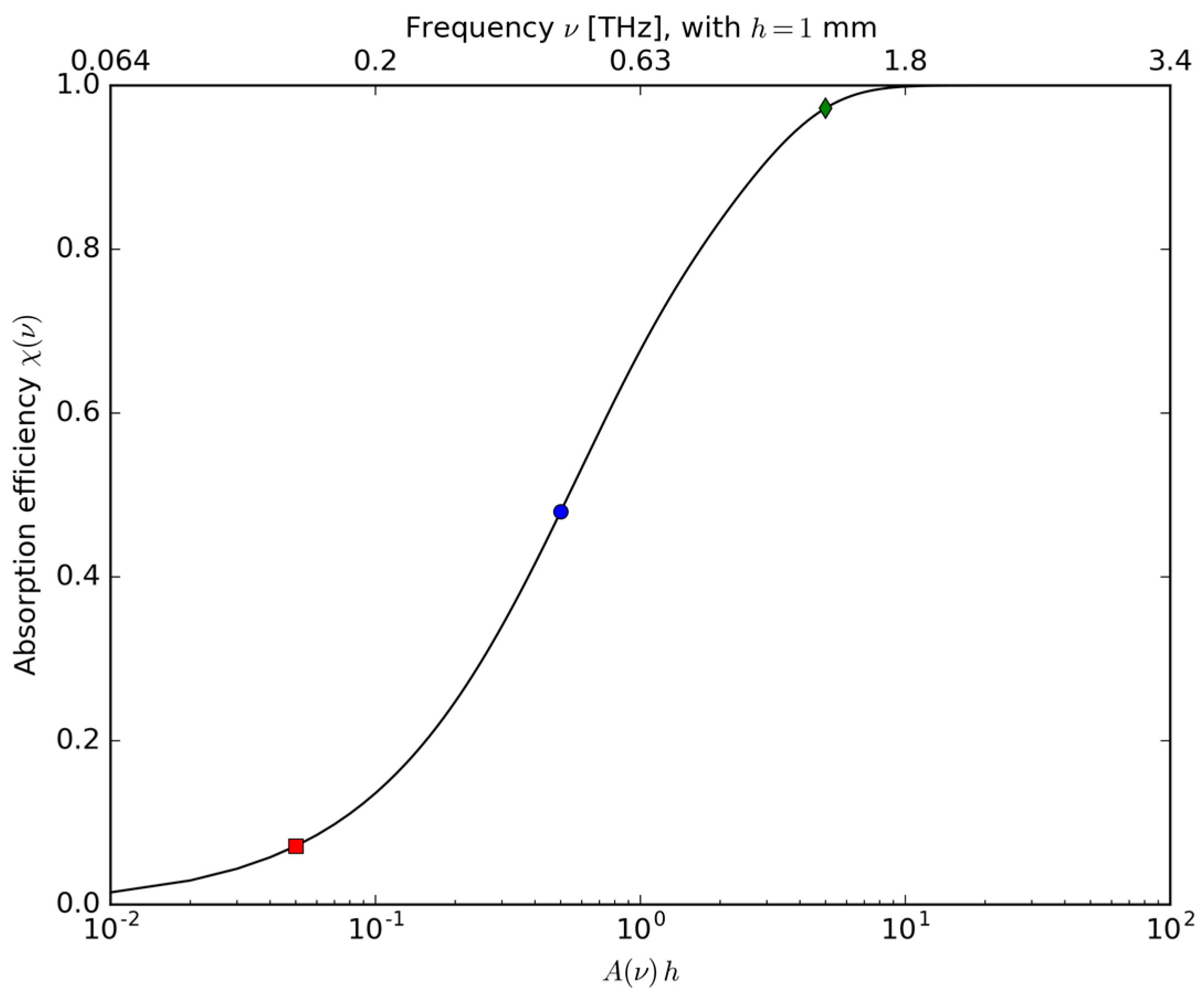 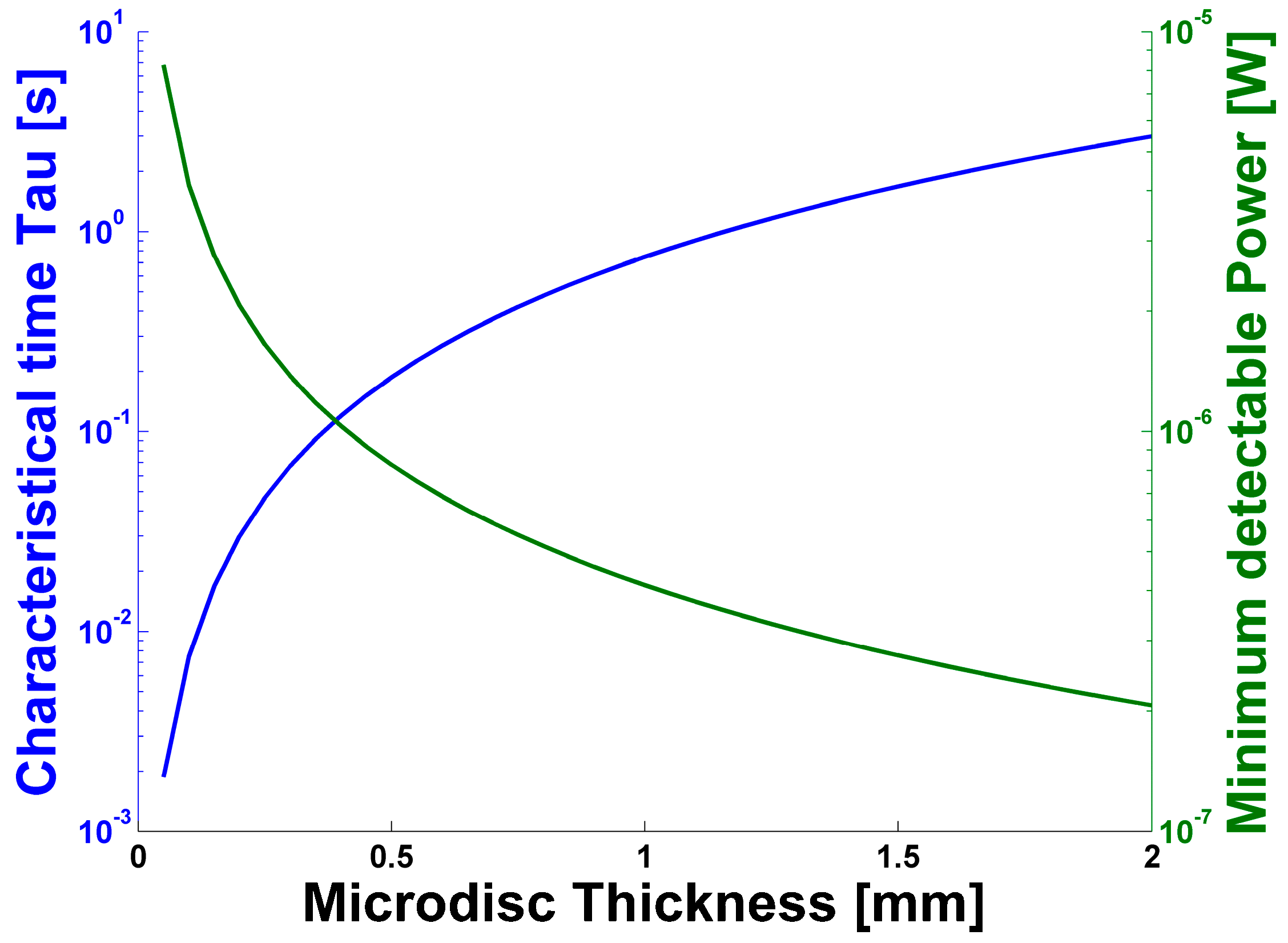 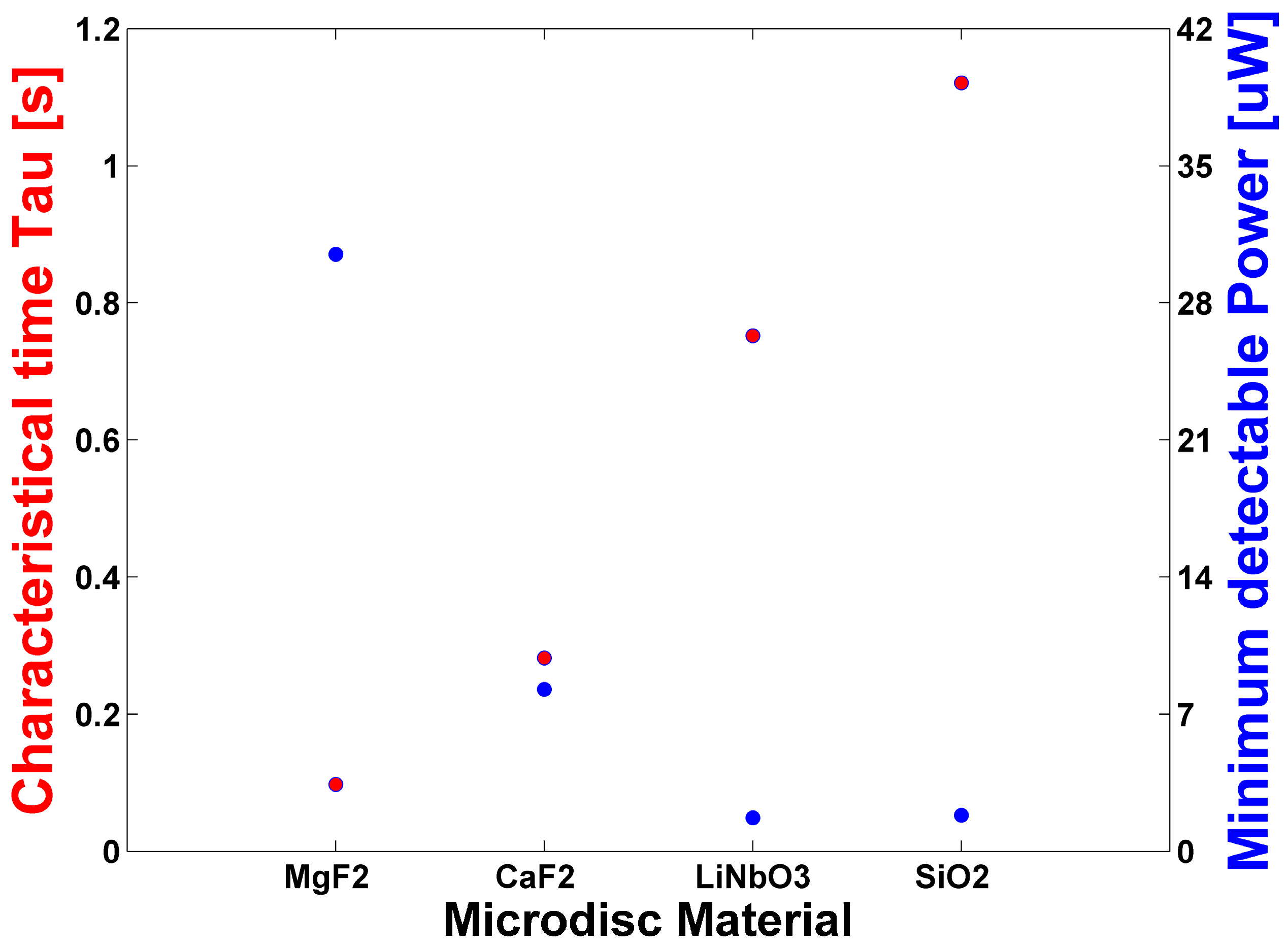