Sensors and Biosensors for C-Reactive Protein, Temperature and pH, and Their Applications for Monitoring Wound Healing: A Review
Previous Article in Journal

Respiratory activity is an essential vital sign of life that can indicate changes in typical breathing patterns and irregular body functions such as asthma and panic attacks. Many times, there is a need to monitor breathing activity while performing day-to-day functions such as standing, bending, trunk stretching or during yoga exercises. A single IMU (inertial measurement unit) can be used in measuring respiratory motion; however, breathing motion data may be influenced by a body trunk movement that occurs while recording respiratory activity. This research employs a pair of wireless, wearable IMU sensors custom-made by the Department of Electrical Engineering at San Diego State University. After appropriate sensor placement for data collection, this research applies principles of robotics, using the Denavit-Hartenberg convention, to extract relative angular motion between the two sensors. One of the obtained relative joint angles in the “Sagittal” plane predominantly yields respiratory activity. An improvised version of the proposed method and wearable, wireless sensors can be suitable to extract respiratory information while performing sports or exercises, as they do not restrict body motion or the choice of location to gather data. View Full-Text
Keywords: biomedical signal processing; wearable biomedical sensors; medical equipment; wireless sensor network; E-healthcare biomedical signal processing; wearable biomedical sensors; medical equipment; wireless sensor network; E-healthcare
►▼ Show Figures 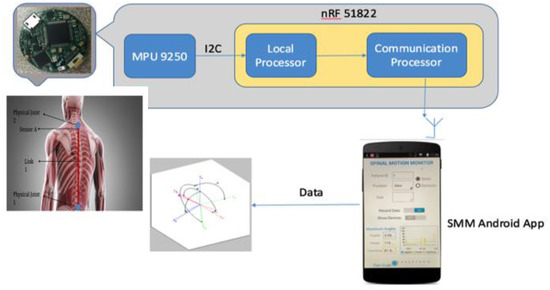