Single-cell analysis has implications for our understanding of higher levels of organization of tissues and organisms and, more importantly, may reveal therapeutic approaches to correct flaws in this organization [1]. In conventional single-cell analysis systems, flow cytometry is one of the most widely used technologies. This technology is a high-throughput system combined with fluorescent labeling and allows for the quantitative determination of various protein levels in a given cell population [2,3]. However, flow cytometry is inadequate for evaluating spatial localization of protein expression within single cells. Moreover, this system is not sufficiently sensitive to detect extremely low ratios (<10−5) of residual target cells among a major cell population [4]. Thus, conventional flow cytometry presents some limitations for high-throughput screening and functional analysis of single cells. For example, it is difficult to detect and analyze circulating tumor cells (CTCs) in the peripheral blood of metastatic cancer patients using flow cytometry [4,5]. This is because CTCs in the peripheral blood of metastatic cancer patients are estimated to occur at a frequency of approximately 1 CTC per 106–107 peripheral blood cells [6,7].
The advent of microchip technology has set forth the expectation of a highly sensitive, high-throughput, analytic system wherein individual cell function can be evaluated. CTC separation methods have also been developed, allowing for the capture of cells with specific cell surface markers such as epithelial cell adhesion molecule (EpCAM) with the use of magnetic beads or microstructures coated with monoclonal antibodies [5]. In addition, some microfluidic devices have been developed to detect CTCs in whole blood, and these devices also enable the easy and efficient separation of CTCs [8,9]. Although EpCAM-based methods can detect low frequencies of EpCAM-positive CTCs in whole blood, they cannot achieve a reproducible recovery of CTCs from different types of tumors. Moreover, a size-selective microcavity array was also developed for the detection of CTCs [10]. This device filters blood cell samples and traps target single cells on a microcavity array by applying negative pressure. This method is not ideal, however, as it can overlook small cells and induce physical stress in trapped cells, thus compromising any cell function analysis. Numerous other cell microarray studies have been reported to separate and analyze kinds of culture cells. Anderson et al. developed the biomaterial microarray for their effects on human embryonic stem cell growth and differentiation using populations of human embryonic stem cells [11]. A microchamber-typed array was also reported for measuring cytotoxicity of anticancer chemicals [12]. Although these cell microarray systems efficiently performed high-throughput screening and analysis for biomaterials and anticancer drugs, a single-cell-based assay and retrieval seemed to be impossible using these microarray format. In another report, a chemical-trapping single cell array was developed to efficiently separate single cells using a photo-cleavable poly-ethylene glycol (PEG)-lipid [13]. The single cell array system achieved a single-cell-based assay, but it has difficulty retrieving chemical-trapped single-cells and there is a possibility of inducing chemical stress in trapped cells. Therefore, a simply designed single-cell separation and analysis system is required for accurate evaluation without the use of specific chemicals and antibodies, while minimizing cell exposure to stress. Furthermore, systematizing and automating sequential process of separation, analysis, and retrieval for various types of single-cells, is expected to create a novel single-cell analysis and diagnosis system.
In our previous study, we developed a single-cell microarray chip for the analysis of antigen-specific single B-cells [14]. Jin et al. further improved this single-cell microarray chip and developed a new system that can directly detect the secretion of antibodies by single cells [15]. Here, we developed a new single-cell microarray chip for the separation, analysis, and retrieval of adherent and non-adherent cultured cancer cells. Using this single-cell microarray in combination with multi-antibody staining, we analyzed and evaluated the expression of proteins specific to different cancer cell types. Furthermore, we demonstrated the potential of the single-cell retrieval process for further analyses. This single-cell microarray chip system allows for easy and accurate separation and analysis of single cells under low stress conditions.

2.1. Construction of a Single-Cell Microarray Chip

The single-cell microarray chip comprised 62,410 microchambers (31–40 µm upper diameter, 11–20 µm lower diameter, 28 µm depth, 100 µm pitch, and spacing as indicated) and was made of polystyrene using the Ultraviolet-Lithographie Galvanoformung Abformung (UV-LIGA) process by SEIKOH GIKEN Co. Ltd., Chiba, Japan (Figure 1). Using UV-lithography, a photoresist substrate was exposed to and patterned with a metal photomask on a glass plate. After development, the resulting patterned photoresist substrate was used to form a nickel mold with paired microstructures formed by electroforming. Finally, the polystyrene microarray chip was fabricated from the nickel mold by injection molding (Figure 2). Each microarray chip consisted of 10 different size patterns of clusters, and each cluster consisted of 6241 (79 × 79) microchambers. Each microchamber had the shape of a circular cone frustum and could accommodate cells (Figure 1).

3.1. Separation of Different Types of Single Cancer Cells on a Single-Cell Microarray Chip

3.2. Identification of Different Types of Cancer Cells on a Single-Cell Microarray Chip

To verify the identity of the adherent carcinoma NCI-H1650 cells or non-adherent CCRF-CEM leukocytes in the microchambers, we used a multi-staining approach. PE-labeled anti-cytokeratin and Alexa Fluor 488-labeled anti-EpCAM monoclonal antibodies specifically marked carcinoma cells (epithelial cells), whereas the Alexa Fluor 647-labeled anti-CD45 monoclonal antibody was specific to leukocytes, and DAPI labeled the nuclei of all cells (Figure 6). Fluorescent microscopic images of NCI-H1650 cells stained with anti-cytokeratin, anti-EpCAM, and DAPI were obtained (Figure 6A,B,D), and the merged images identified triple positive NCI-H1650 cells (Figure 6E). No anti-CD45-positive cells were observed (Figure 6C). On the other hand, fluorescent microscopic images of CCRF-CEM cells stained with anti-CD45 and DAPI were obtained (Figure 6I,J), and the merged images identified double-positive CCRF-CEM cells (Figure 6K), whereas no anti-cytokeratin or anti-EpCAM staining was observed (Figure 6G,H). These results support the utility of cell labeling in combination with single-cell microarray for the verification of cellular identity. This means that different types (adherence and/or size) of cell could be separated into single cells and easily analyzed by multi-staining without cellular detachment from the microchamber. Furthermore, since the single-cell microarray chip system accurately separates and analyzes single cancer cells and leukocytes, this system could be applicable for the screening of cancer cells, such as CTCs in blood cell samples. However, CTCs are very rare cells with an expected low frequency of 1 CTC per 106–107 peripheral blood cells (Leukocytes). As approximately 60,000 cells can be analyzed on the single-cell microarray chip, 20–200 chips would be needed to analyze the numbers of blood cells. This would not be realistic in clinical research. In the future, we need to improve the chip design and increase the number of the microchambers for trapping a large number of blood cells.

After the separation and analysis of single cancer cells (NCI-H1650 and CCRF-CEM) on the single-cell microarray chip, we successfully retrieved these single cells using a micromanipulator system under a microscope (Figure 7). Both adherent NCI-H1650 and non-adherent CCRF-CEM single cells were easily retrieved from the microchambers using the micromanipulator. This was achieved because both types of cells gently adhered to the bottom of the microchambers using only gravitational force, without the use of any type of biochemical affinity, such as antibodies, or any kind of physical force, such as aspiration pressure and magnetic force. However, as the retrieval process is manual operation and it takes hours to search and pick up a high number of single cells, it is difficult to pick viable single cells out of the microchambers without DNA and/or RNA degradation. Thus, we need to improve the software of the microscopy system and the manual micromanipulator system for easier and faster analysis and for the retrieval of a high amount of viable single cells. Previously, we reported the retrieval of single B-cells using a micromanipulator and gene analysis performed by RT-PCR [14]; it would also be possible to perform the gene analysis using the single-cell microarray chip system. 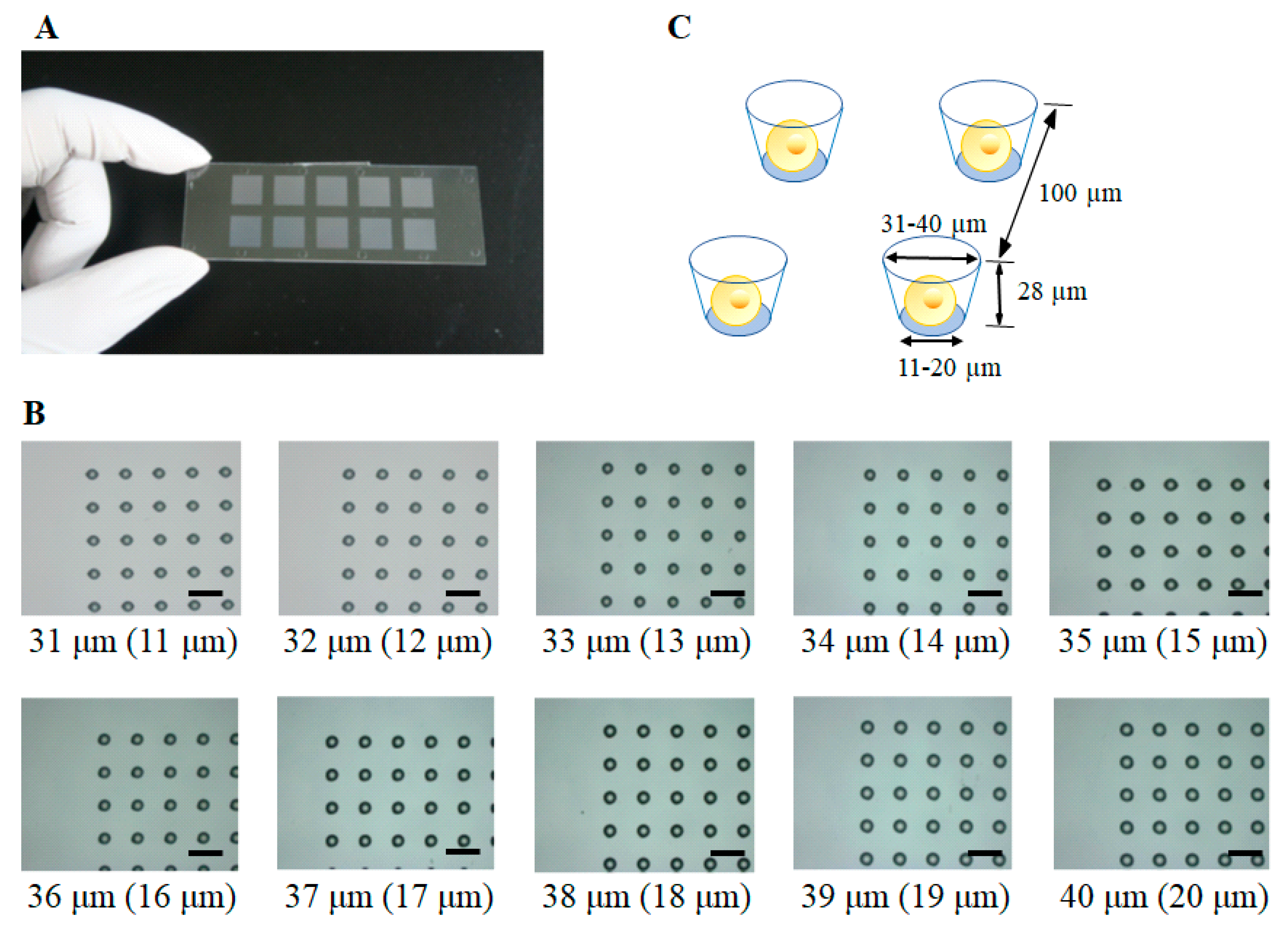 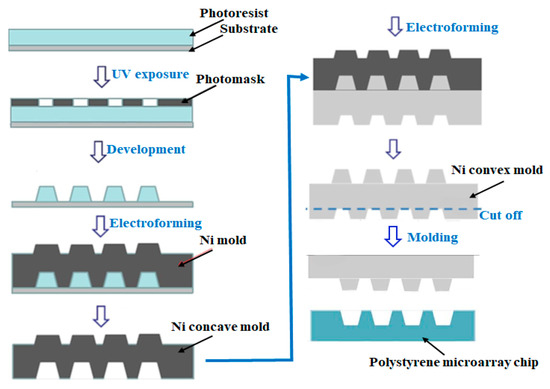 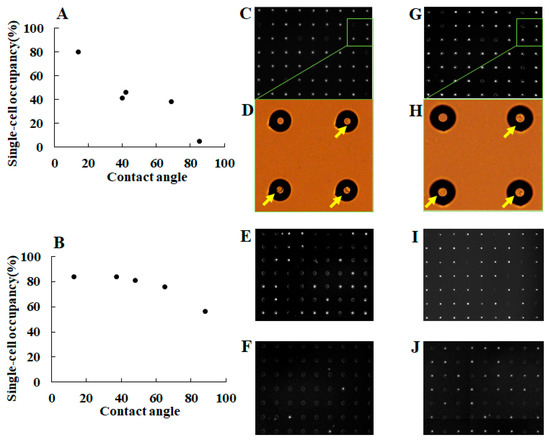 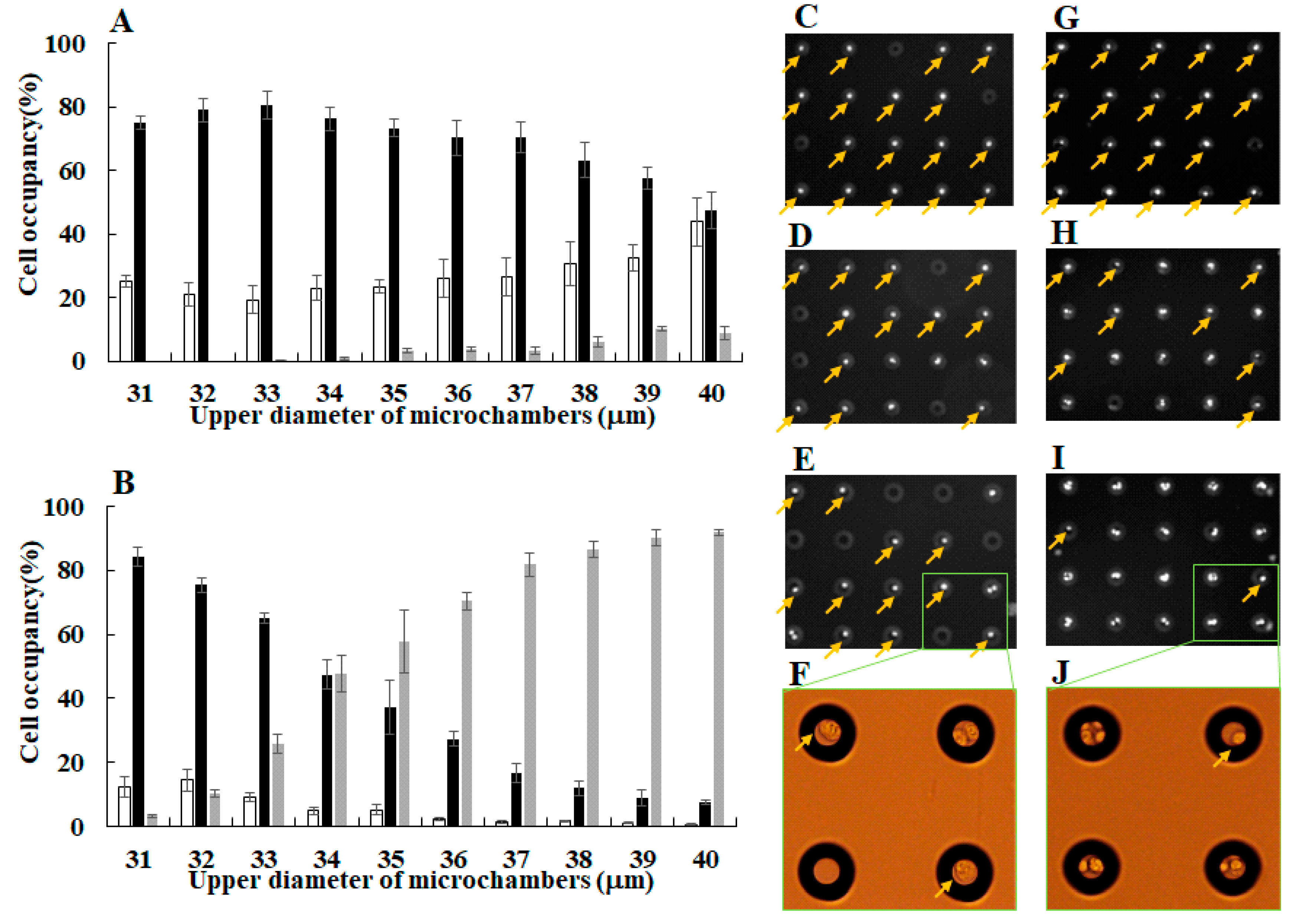 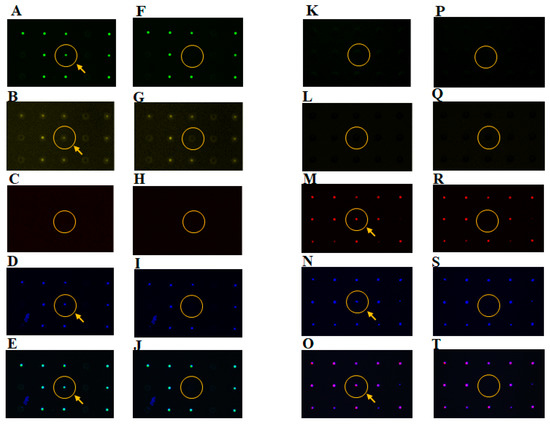