Multi-robot formations are an important advance in recent robotic developments, as they allow a group of robots to merge their capacities and perform surveys in a more convenient way. With the aim of keeping the costs and acoustic communications to a minimum, cooperative navigation of multiple underwater vehicles is usually performed at the control level. In order to maintain the desired formation, individual robots just react to simple control directives extracted from range measurements or ultra-short baseline (USBL) systems. Thus, the robots are unaware of their global positioning, which presents a problem for the further processing of the collected data. The aim of this paper is two-fold. First, we present a global alignment method to correct the dead reckoning trajectories of multiple vehicles to resemble the paths followed during the mission using the acoustic messages passed between vehicles. Second, we focus on the optical mapping application of these types of formations and extend the optimization framework to allow for multi-vehicle geo-referenced optical 3D mapping using monocular cameras. The inclusion of optical constraints is not performed using the common bundle adjustment techniques, but in a form improving the computational efficiency of the resulting optimization problem and presenting a generic process to fuse optical reconstructions with navigation data. We show the performance of the proposed method on real datasets collected within the Morph EU-FP7 project. View Full-Text
Keywords: SLAM; multi-vehicle; mapping; underwater SLAM; multi-vehicle; mapping; underwater
►▼ Show Figures 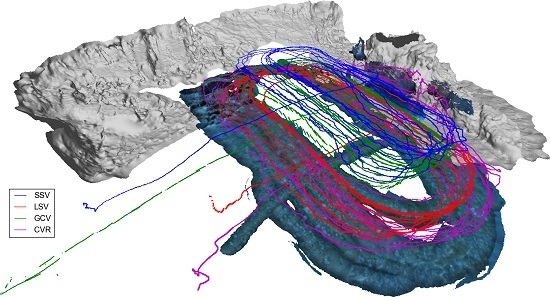