The problem of reducing traffic delays and decreasing fuel consumption simultaneously in a network of intersections without traffic lights is solved by a cooperative traffic control algorithm, where the cooperation is executed based on the connection of Vehicle-to-Infrastructure (V2I). This resolution of the problem contains two main steps. The first step concerns the itinerary of which intersections are chosen by vehicles to arrive at their destination from their starting point. Based on the principle of minimal travel distance, each vehicle chooses its itinerary dynamically based on the traffic loads in the adjacent intersections. The second step is related to the following proposed cooperative procedures to allow vehicles to pass through each intersection rapidly and economically: on one hand, according to the real-time information sent by vehicles via V2I in the edge of the communication zone, each intersection applies Dynamic Programming (DP) to cooperatively optimize the vehicle passing sequence with minimal traffic delays so that the vehicles may rapidly pass the intersection under the relevant safety constraints; on the other hand, after receiving this sequence, each vehicle finds the optimal speed profiles with the minimal fuel consumption by an exhaustive search. The simulation results reveal that the proposed algorithm can significantly reduce both travel delays and fuel consumption compared with other papers under different traffic volumes. View Full-Text
Keywords: dynamic programming; V2I; traffic delays; fuel consumption; speed profile dynamic programming; V2I; traffic delays; fuel consumption; speed profile
►▼ Show Figures 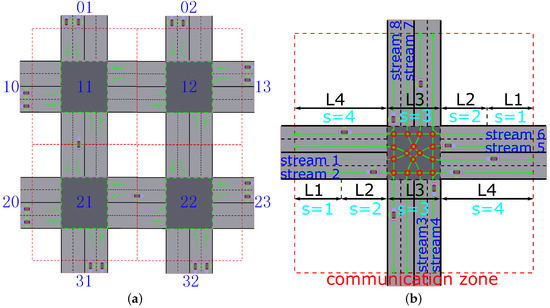 Li, J.; Dridi, M.; El-Moudni, A. A Cooperative Traffic Control of Vehicle–Intersection (CTCVI) for the Reduction of Traffic Delays and Fuel Consumption. Sensors 2016, 16, 2175.


Li J, Dridi M, El-Moudni A. A Cooperative Traffic Control of Vehicle–Intersection (CTCVI) for the Reduction of Traffic Delays and Fuel Consumption. Sensors. 2016; 16(12):2175.