Peroxynitrite Sensor Based on a Screen Printed Carbon Electrode Modified with a Poly(2,6-dihydroxynaphthalene) Film
Next Article in Special Issue

Colorimetric Analysis of Ochratoxin A in Beverage Samples

Versatile odor sensors that can discriminate among huge numbers of environmental odorants are desired in many fields, including robotics, environmental monitoring, and food production. However, odor sensors comparable to an animal’s nose have not yet been developed. An animal’s olfactory system recognizes odor clusters with specific molecular properties and uses this combinatorial information in odor discrimination. This suggests that measurement and clustering of odor molecular properties (e.g., polarity, size) using an artificial sensor is a promising approach to odor sensing. Here, adsorbents composed of composite materials with molecular recognition properties were developed for odor sensing. The selectivity of the sensor depends on the adsorbent materials, so specific polymeric materials with particular solubility parameters were chosen to adsorb odorants with various properties. The adsorption properties of the adsorbents could be modified by mixing adsorbent materials. Moreover, a novel molecularly imprinted filtering adsorbent (MIFA), composed of an adsorbent substrate covered with a molecularly imprinted polymer (MIP) layer, was developed to improve the odor molecular recognition ability. The combination of the adsorbent and MIP layer provided a higher specificity toward target molecules. The MIFA thus provides a useful technique for the design and control of adsorbents with adsorption properties specific to particular odor molecules. View Full-Text
Keywords: odor sensor; adsorbents; molecularly imprinted filtering adsorbent odor sensor; adsorbents; molecularly imprinted filtering adsorbent
►▼ Show Figures 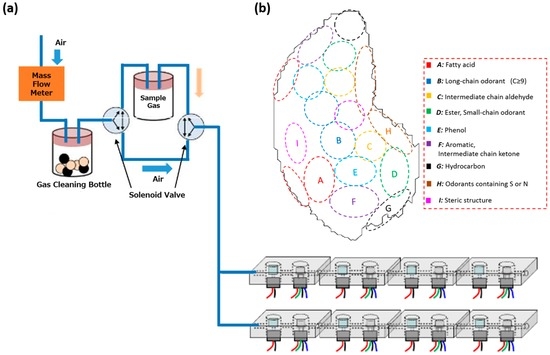