The introduction of RGB-Depth (RGB-D) sensors into the visually impaired people (VIP)-assisting area has stirred great interest of many researchers. However, the detection range of RGB-D sensors is limited by narrow depth field angle and sparse depth map in the distance, which hampers broader and longer traversability awareness. This paper proposes an effective approach to expand the detection of traversable area based on a RGB-D sensor, the Intel RealSense R200, which is compatible with both indoor and outdoor environments. The depth image of RealSense is enhanced with IR image large-scale matching and RGB image-guided filtering. Traversable area is obtained with RANdom SAmple Consensus (RANSAC) segmentation and surface normal vector estimation, preliminarily. A seeded growing region algorithm, combining the depth image and RGB image, enlarges the preliminary traversable area greatly. This is critical not only for avoiding close obstacles, but also for allowing superior path planning on navigation. The proposed approach has been tested on a score of indoor and outdoor scenarios. Moreover, the approach has been integrated into an assistance system, which consists of a wearable prototype and an audio interface. Furthermore, the presented approach has been proved to be useful and reliable by a field test with eight visually impaired volunteers. View Full-Text
Keywords: RGB-D sensor; RealSense; visually impaired people; traversable area detection RGB-D sensor; RealSense; visually impaired people; traversable area detection
►▼ Show Figures 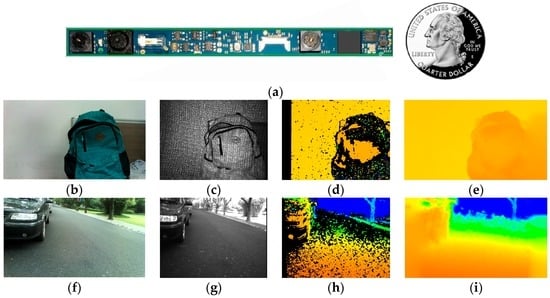