The prospective use of ethanol for automobile applications is expected to increase steadily, because as a fuel it is relatively clean and sustainable. Though chemical synthesis has been a major process for its production, the production from grain fermentation is desirable due to its sustainability. The beer produced from the fermentation has low ethanol contents, and it is concentrated to a fuel quality ethanol using conventional separation processes. In the concentration process the in-line measurement of the water content in ethanol is necessary for the process control, and a simple in-line measurement technique is preferred to help the practical operation of the concentration process.

Various sensor technologies have been applied to determine water content in ethanol for in-line applications. Though many instruments have been developed to measure the water content, the in-line measurement is more convenient to apply to the ethanol concentration process. One off-line technique was introduced by Bruno et al. [1]. They measured the water content from the distillate volume fraction obtained from a standard distillation apparatus. Because optical methods are easy to use for in-line applications, many such techniques have been proposed and tested. Fujiwara et al. [2] used a laser as the light source, and measured the reflection intensity of the applied laser to determine the water content. Another optical technique measured the near IR absorbance to measure the water content [3]. In another study ultrasound was applied to the sample, and its velocity was measured to calculate the water content in commercial beverages [4]. Because of its easy in-line applicability high frequency electric signals were applied to a coaxial stub immersed in the flow line of a liquid sample [5]. The dielectric permittivity of the sample was measured from the variation of amplitude, which can be used to determine the ethanol and water composition. These techniques utilize large instruments and require sophisticated peripheral accessories.

A quartz crystal microbalance (QCM) has a thin quartz crystal plate with two metal electrodes on both sides that establish an alternating electric field across the plate, causing vibration of the plate at its resonant frequency. The frequency is sensitive to mass loading and micro-rheology on the electrodes. The QCM utilizes the characteristic of frequency variation with the changed mass loading and visco-elasticity [6]. The change of mass loading due to crystal formation has been used to detect the moment of crystal nucleation [7] and growth [8–11]. The change was also applied to detect the dew point of organic vapors from the condensation on the electrode surface [12]. From the variation of micro-rheology the kinetic rate of photopolymerization was measured to analyze polymerization kinetics [13,14]. The thermal properties of polymers were also measured from the change of visco-elasticity of the QCM [15,16].

Instead of the direct measurements of surface loading, a modification of the electrode surface of a quartz crystal microbalance has been utilized for the entrapment of target materials inducing a load change. In the determination of organic substances either in gas or liquid phase, organic films have commonly been coated on the surface of one of its electrodes [17–19]. Though many polymer film-coated sensors [20–22] have been applied to various applications with improved stability of the coated material and selectivity of the detected material, no application to the measurement of water content in ethanol has been reported. Recently the QCM has been widely used in bio-applications [23,24]. The effect of water in the measurement of toluene dissolved in water using a polymer coated QCM was examined by Pejcic et al. [25,26], and it was found that the water exposure time has a significant effect on sensitivity at high toluene concentration. Pejcic et al. [27] also found that the molecular selectivity of a polymer can be improved by the proper plasticizer applied to the polymer- coated QCM for the measurement of aromatic hydrocarbons in water.

In this study, a measurement device for water contents in ethanol is developed by applying a PVA thin film on the electrode surface of the QCM. For the performance evaluation, 2% to 10% water contents are utilized to determine the frequency drop of the polymer film-coated QCM. The measurement is conducted in a flow system of the ethanol samples. In addition, the characteristics of the film are investigated by microscopic observation and FTIR analysis.

Polyvinyl alcohol (Mw. 22,000) was obtained from Junsei Chemical (Tokyo, Japan), and ethyl alcohol (99.99%) was from Burdick & Jackson (Ulsan, Korea). The chemicals were used as received. Quartz crystal microbalances (Sunny Electronics Co., Chungju, Korea) were purchased from a local store in capped state for electronic circuit use. The cap was removed before coating the polymer films.

An AT-cut quartz crystal microbalance having a base frequency of 8 MHz was utilized in this experiment. The electrodes of the microbalance were silver finished. The microbalance was rinsed with ethanol before applying the PVA. The PVA was dissolved in water at a concentration of 0.3%, and the solution was stirred for an hour. A 1.8 μL sample of the completely dissolved PVA solution was spread on the one of microbalance electrode surfaces. After briefly drying in air, the microbalance was baked in an oven at a temperature of 120 °C for half an hour. The microbalance was cooled in a Petri dish containing silica gel for 10 min. The PVA thin film was coated twice following the same procedure. Figure 1 describes the sensor preparing procedure. The cell module holding the microbalance for the batch experiment was built with polypropylene plates. The thicknesses of two plates were 5 mm. The top plate has a hole to make one electrode of the microbalance contact with the ethanol, and the other is sealed from the ethanol. To prevent leakage a thin silicone gasket and two o-rings are placed between the two plates. The size of the two plates was the same with a dimension of 30 mm by 50 mm. Six screws tighten the two polypropylene plates.

For the in-line measurement the quartz crystal microbalance was installed in the module as described in Figure 2, and the module was placed in the experimental setup as shown in Figure 3. The ethanol was flow through the two nipples prepared on the left hand side plate of the cell module.

The measurements of water content in ethanol were conducted in a beaker for batch measurement and in the flow system for in-line measurement. The procedures are explained separately as below.

The PVA-coated microbalance was mounted in the cell module, and placed vertically in a 50 mL beaker containing ethanol. While the ethanol was stirred mildly, the resonant frequency was measured. The oscillation circuit provides a small amount of oscillating current to the microbalance, and the resonant frequency of the microbalance is determined by the load and rheological variation on the surface of the microbalance electrode. The frequency is counted with a home-made counter connected to a PC. The measured frequency was stored in the PC for later data analysis. When the frequency is stable, water is added to ethanol to increase the water content by 2 wt% each time up to 10%.

After the microbalance was placed in the cell module as described in Figure 2, the experimental setup was assembled as illustrated in Figure 3. While the ethanol flowed through the module at a rate of 10 mL/min, the variation of resonant frequency was measured continuously with the PC. The water content was adjusted by adding distilled water in the ethanol for the increase, and ethanol was added for the decrease of water content. The experiment was conducted from 2 wt% of water to 10 wt% with a 2% increase in each step for about 4 min, then the content was decreased by 2 wt% in each step down to 2 wt%.

The experimental results of batch and in-line measurements were analyzed separately, and the PVA coating was characterized.

After the experiment was over, the stored data was retrieved from the PC to analyze the experimental outcome. The drift at the 6% and 8% water content in the blank microbalance measurement was caused by the incomplete mixing of the solution. The change of solution density and viscosity causes the frequency variation. In order to eliminate this blank change from the actual measurement the blank test was conducted. The step-wise decrease of the frequency indicates the effect from the elevation of water content by 2% each. The measurement was continued for about 8 min at each water contents until the frequency stabilized. The test was carried out four times, and the results are demonstrated in Figure 4. A fitted curve was derived from the data to be used for the compensation of the frequency variation of the blank microbalance. Though the fitted curve is slightly bent, the frequency drops almost linearly with the increase of the water content. The correlation coefficient (R2) was 0.98.

For the in-line measurement of water content in ethanol, the experiment was conducted in the flow system as shown in Figure 3. When the water content increases, the frequency is reduced. Then, the frequency recovers as the water content decreases. It indicates that the measurement with the PVA-coated microbalance needs to compensate for the blank effect. For the compensation a linear relation of the blank effect is derived from four blank microbalance tests as shown in Figure 7 (R2 = 0.85).

When the PVA was applied to the microbalance surface, it was coated evenly on the surface. The amount of PVA coating affects the frequency variation, and therefore the measurements were calibrated for the amount of the coating. The coating amount was determined from the difference between the resonant frequencies before and after the coating. Figure 10 illustrates the microscopic observation of the surface. The left figure shows the surface of a bare microbalance, and the right one shows the PVA-coated microbalance. The PVA coating spread on the surface is seen from the disappearance of small holes shown in the bare microbalance surface. A similar observation was found from the scanning electron microscope photograph given in Figure 11. Again the left corresponds to the bare microbalance magnified by 1000 times, and the right picture is the photograph of the PVA-coated microbalance. The PVA coating is demonstrated in the right picture. The binding of water and PVA was measured with an FTIR spectrometer, and the resulting spectra are shown in Figure 12. When the spectra of PVA only and PVA and water are compared at the wavelength of water peak in the bottom spectrum, there is a higher peak in the spectrum of PVA and water at the water wavelength. The comparison indicates the binding of PVA and water, which is used in the measurement of water content of this study.

A simple device using a quartz crystal microbalance to determine water content in ethanol was proposed here. The quartz crystal microbalance was coated with PVA for the improved sensitivity with water, and its performance was examined with samples of known water content in batch and flow systems. The results calibrated with blank deduction indicate that there is strong relation between the resonant frequency drop and water content. This outcome can be utilized in the determination of unknown water content in ethanol by measuring the frequency of the PVA-coated QCM for the unknown sample. The measurement results in the flow system prove that the proposed microbalance can be used for in-line applications. The condition of the PVA coating was investigated by optical and scanning electron microscopy and FTIR spectroscopy. 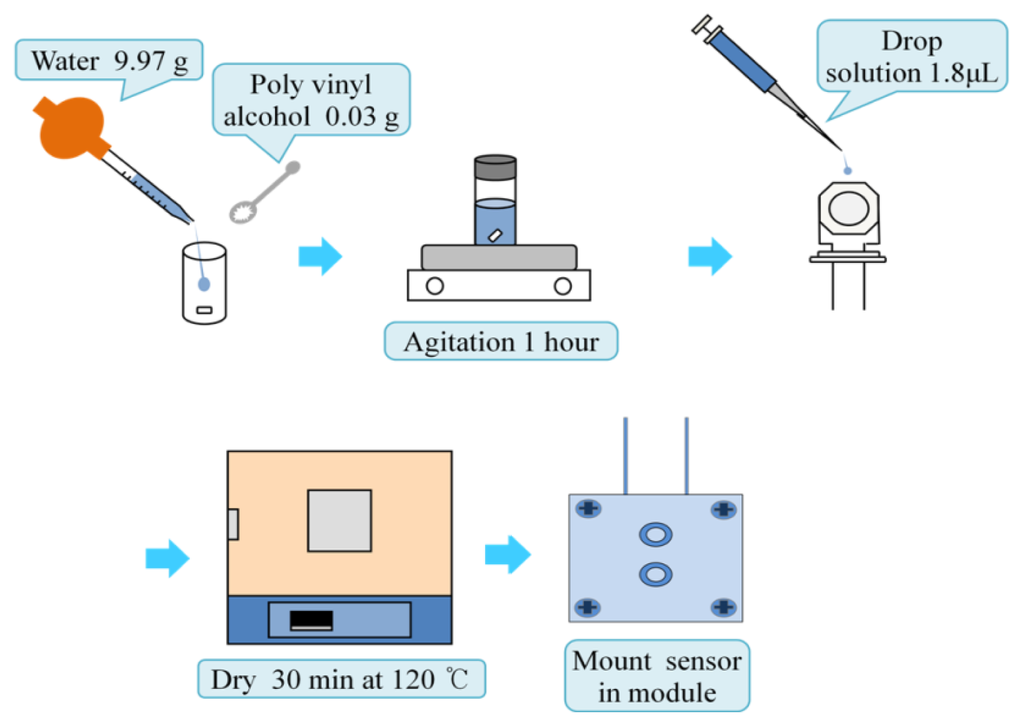 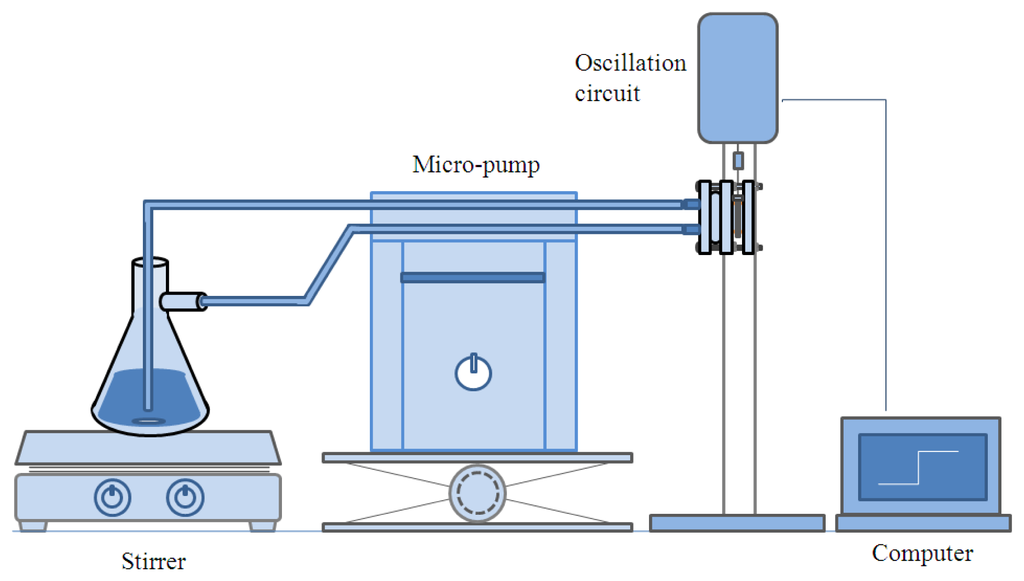