Optimization of Hydrogen Peroxide Detection for a Methyl Mercaptan Biosensor

Methyl mercaptan (MM) is one of the volatile sulfur compounds (VSCs), which are known to be involved in halitosis (bad breath) [1,2] and periodontal diseases [2], and the predominant causative factor of noticeable oral malodor [3]. MM is also present in several other cases such as the bottle storage of wines [4]; wood-pulp mills, sewage treatment plants and factories producing jet fuel, pesticides and plastics [5]; and even in the atmosphere and on the ocean surface [6]. Consequently, MM detection is important in the dental, medical, food, environment and atmosphere fields.

A low-cost, sensitive and specific sensor for detecting MM could be an interesting alternative to conventional MM monitoring methods such as the use of a halimeter, an expensive device, in the dental field [7,8]. Biosensors to monitor MM have been described by Mitsubayashi et al. [9–12]. In their work, monoamine oxidase A (MAO-A) or flavin-containing monooxygenase (FMO) was used to catalytically oxidize MM, and the oxygen consumption induced by this reaction was monitored. Coupled with this system, a substrate regeneration cycle with ascorbic acid was carried out. However, a sensor for the detection of O2 depletion, which has the initially high current background of the oxygen electrode [13], is less sensitive than one for H2O2 measurement. To solve this problem and seek sensitive detection methods, our objective was to develop a MM biosensor coupled with sensitive hydrogen peroxide detection. Alcohol oxidase (AOX) is known to catalytically oxidize MM with production of formaldehyde, sulfide and H2O2 [14] according to the reaction:

Hydrogen peroxide generated during enzyme-catalyzed reactions can be electrochemically detected on modified/unmodified carbon matrixes [15–27]. In this work, unmodified carbon nanotube (CNT), cobalt phthalocyanine (CoPC), Prussian blue (PB), and Os-wired HRP modified screen printed electrode (CSPE) sensors were fabricated and tested to detect H2O2. Our aim was to seek the most sensitive and optimal detection method of H2O2 for a MM amperometric biosensor.

CNT modified CSPEs were prepared as described in the work of Silveira et al. [28]. Briefly, 10 μL of 0.3 mg/mL SWCNT water dispersion were successively deposited on the CSPEs working electrode, drying each layer one by one under vacuum. The electrodes were then washed with water.

Cobalt-phtalocyanine-modified paste was purchased from Gwent Electronic Materials, Ltd. (Gwent, UK) and modifications were performed on working electrode by the DEK screen-printing system.

For the Os-HRP modified CSPEs, 10 μL 0.1 M phosphate buffer solution, pH 7.5, containing 10% (v/v) Os-HRP was deposited on the surface of CSPEs. It was allowed to dry at room temperature for 2 h. It was thoroughly washed with buffer before use.

The cyclic voltammetry studies were performed in 0.1 M phosphate buffer solution, pH 7.5 to investigate the CSPEs' electrochemical behavior (Figure 2). CSPEs showed no obvious peak in the absence of H2O2 in the potential range from −0.2 V∼0.8 V versus Ag/AgCl. In the presence of H2O2, CSPEs started to perform current response at potential around +0.3 V versus Ag/AgCl, indicating the onset potential of the H2O2 electrooxidation.

For the investigation of H2O2 limit detection, chronoamperometry experiments were carried out with several concentrations of H2O2 injected into the stirred bath cell (Figure 3). For unmodified CSPEs, the H2O2 detection limit was 3.1 μM (S/N = 3) applying a +0.6 V potential versus Ag/AgCl, and the current response slope of the calibration curve was 0.208 μA/mM. To investigate the reproducibility, three parallel measurements with 0.1 mM H2O2 revealed a relative standard deviation (RSD) of 12.1%. The high RSD observed of unmodified CPSEs is likely related to the marked differences in the real active electrode area, which is difficult to handle and adjust.

Both CSPEs (Figure 2) and CNT/CSPEs (Figure 4) showed a H2O2 oxidation peak in the cyclic voltammetry experiments for the studied potential range. The onset potential of the H2O2 electrooxidation for CNT/CSPEs was around +0.2 V versus Ag/AgCl, the detection limit was 1.3 μM (S/N = 3) applying a positive potential of +0.6 V versus Ag/AgCl, and the current response slope of CNT/CSPEs for H2O2 was 32.1 μA/mM. To investigate the reproducibility, three parallel measurements with 0.1 mM H2O2 revealed a RSD of 19.7%.

Both unmodified CSPEs and CNT are intrinsically carbon. Compared to unmodified CSPEs, detections of H2O2 for CNT/CSPEs need lower oxidation potential (CSPEs, +0.3 V; CNT/CSPEs, +0.2 V), and have lower detection limit (CSPEs, 3.1 μM; CNT/CSPEs, 1.3 μM) with higher current response (CSPEs, 0.208 μA/mM; CNT/CSPEs, 32.1 μA/mM). The increased current response may arise from the large electric active area and a thin, porous diffusion layer [30]; the reasons of lower onset oxidation potential and lower detection limit are still controversial [31], because CNT may contain metal impurities derived from the catalysts used for their growth [32,33]. In a sense, CNT/CSPEs could be more favorable than unmodified CSPEs for H2O2 detection.

To investigate the electrochemical behavior of CoPC/CSPEs in phosphate buffer solution, cyclic voltammetry experiments were carried out in the potential range of −0.2 V∼0.8 V versus Ag/AgCl (Figure 5). The presence of a well-defined oxidation current peak at around +0.3 V versus Ag/AgCl is consistent with the following reaction [21]:

The reaction can be described by a chemical-electrochemical (CE) mechanism [21]: H2O2 chemically reduces Co2+ to Co+ and its subsequent electrochemical re-oxidation is observed as an oxidation peak. Consequently, this peak is used for the quantification of H2O2. For CoPC/CSPEs, the H2O2 detection limit was calculated as 71 nM (S/N = 3) applying a positive potential of +0.4 V versus Ag/AgCl in chronoamperometry experiments, and the slope of the calibration curve was 3.7 μA/mM by. Three parallel measurements with 10 μM H2O2 reveal a RSD of 2.4%, indicating a good reproducibility for this sensor.

Without PPD layer coating, PB dissolved in solution, resulting in a CV current decrease in the scanning process. After 20 scan cycles, the PB/CSPEs CV's performance were similar to the unmodified CSPEs (Figure 2). With PPD layer coating, the response of redox peaks of PB reduced slightly even after 50 scan cycles, indicating that the PPD layer stabilized the PB. To investigate the electrochemical performance of PPD/PB/CSPEs H2O2 was added to the solution (Figure 6).

In the presence of H2O2, the electrocatalytical reductive reaction of PB towards to H2O2 can be described as:

For PPD/PB/CSPEs, the H2O2 detection limit was 1.3 μM (S/N = 3) for a cathode potential of −0.2 V and the current response slope was −33 μA/mM. Three parallel measurements with 10 μM H2O2 revealed a RSD = 4.1%. The lower RSDs observed of CoPC/CSPEs and PPD/PB/CSPEs than for unmodified CPSEs and CNT/CSPEs are likely related to the better control of mediator deposition.

The Os-HRP/CSPEs show a couple of stable and well-defined redox peaks at around +30 mV and +70 mV at a scan rate of 20 mV·s−1 (Figure 7 curve a). In the presence of H2O2 (Figure 7 curve b), the electrocatalytical reductive reaction process of Os-HRP towards to H2O2 can be described by Scheme 1.

For Os-HRP/CSPEs, the H2O2 detection limit was 13.7 nM (S/N = 3) at a cathode potential −0.1 V versus Ag/AgCl (Figure 8). According to the Michaelis-Menten equation, the calculated apparent KM,p, from the curve fitting is 53.5 μM. This low KM,p value indicates Os-HRP's high affinity and high effective conversion for the H2O2 substrate and a favorable electron-transfer rate with the osmium mediator. A linear range was obtained until 25 μM. Three parallel measurements with 1 μM H2O2 revealed a RSD of 1.3%, which indicates a good reproducibility. This may be ascribed to the application of a low cathode potential to avoid the interferences with electro-active species. In addition, Os-HRP/CSPEs can be the most specific in detection of H2O2 because of the specificity of the reaction between HRP and H2O2.

The comparison of the amperometric analytical behavior to H2O2 of the five kinds of electrodes developed in this study is summarized in Table 1. It shows that the Os-HRP/CSPEs are the most sensitive electrodes with a low reduction potential applied for H2O2 detection. This is due to the specific, sensitive and rapid turnover of Os-HRP to H2O2.

Interference of electro-active species [25,37–39] is often encountered when using amperometric biosensors and applying a high potential in real samples. The decrease of the applied potential can be effective to avoid a lot of electrochemical interferences. With this consideration, PPD/PB/CSPEs and Os-HRP/CSPEs are used to combine with alcohol oxidase (AOX) in bovine serum albumin matrix to detect methyl mercaptan (MM) applying a low potential in the aqueous phase. The limit of detection of AOX/PPD/PB/CSPEs to MM is 10 μM; of AOX/Os-HRP/CSPEs to MM is 0.5 μM. For AOX/Os-HRP/CSPEs, the calibration curve of the response to MM is linear in the concentration range 0∼15 μM with a good correlation with the classical analytical method. We are working on the stability of the biosensor which is the crucial point to improve its accuracy and reliability. Consequently, Os-HRP/CSPEs are combined with alcohol oxidase an optimum method which gives the best sensitivity in methyl mercaptan detection.

Five kinds of modified carbon screen printed electrodes applied for H2O2 amperometric detection for MM biosensors were presented in this work. In comparison, and despite a worse reproducibility, CNT/CSPEs are a better choice than unmodified CPSEs in H2O2 detection resulting from their lowest detection limit, lowest onset oxidation potential and highest current response of CNT/CSPEs. However, the applied potential of +0.6 V versus Ag/AgCl is too positive to avoid the interference of electro-active species. CoPC/CSPEs and PPD/PB/CSPEs are also a good choice in H2O2 detection because of their low applied potential, low detection limit and good reproducibility. Os-HRP/CSPEs display the lowest detection limit and the best operational reproducibility towards H2O2. With the cathode potential applied and the use of HRP, Os-HRP/CSPEs can avoid the interference of electro-active species and be specific for H2O2 detection. The Os-wired HRP modified screen printed electrode is the optimum method we used to combine with alcohol oxidase in a methyl mercaptan biosensor, usable in both aqueous and gaseous phase detection. 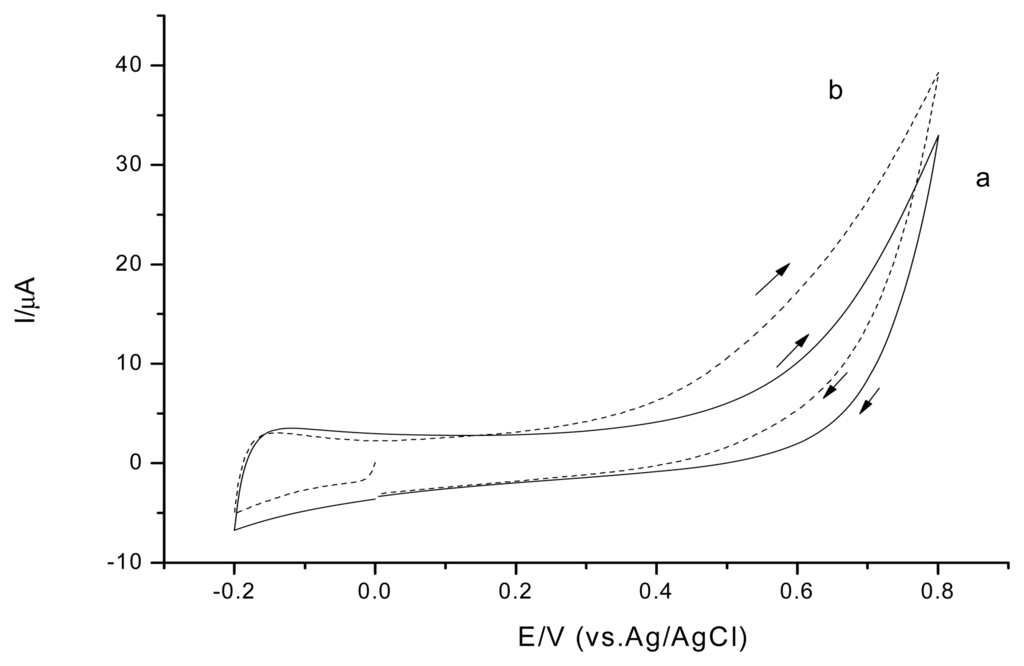 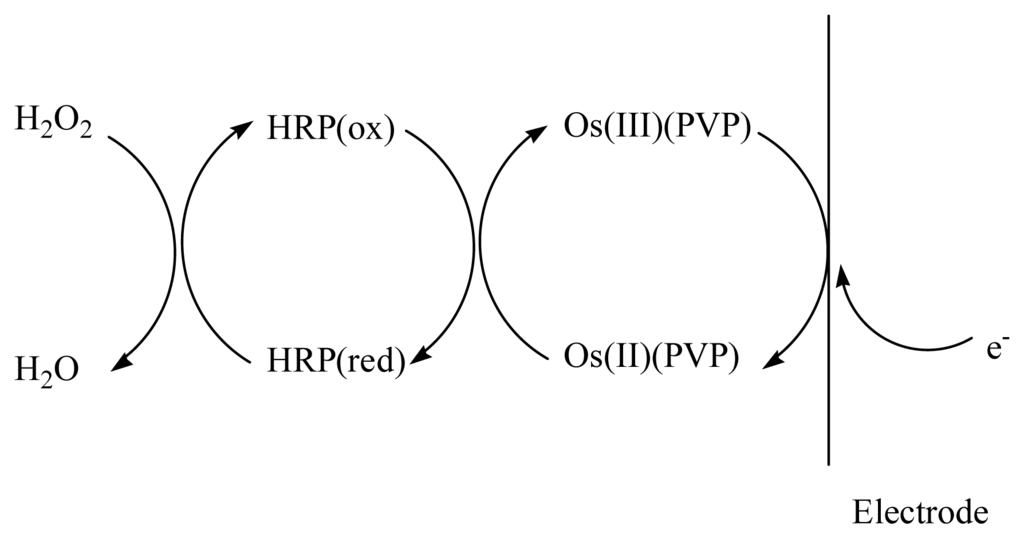 Table 1. Comparison of the amperometric analytical performances for H2O2 detection with the five kinds of electrodes prepared in the present work.