A Temperature Sensor Based on a Polymer Optical Fiber Macro-Bend

In the field of industrial metrology, a gauge block stands for a length standard [1]. The gauge block is used there for verifying of the length measuring instruments used in all branches of mechanical manufacturing. Like all other mechanical measuring tools, gauge blocks need to be calibrated periodically. At present, their calibration methodology is described in the international regulation EN ISO 3650. The methods described there are based on using of mechanical length gauges or laser interferometry [2,3], but none of them is a full contactless method.

From a practical point of view, techniques used nowadays might influence the measured length value due to a mechanical contact between the gauge block and a part of the measurement setup. Therefore, the research in the field of contactless calibration techniques is been pursued incessantly.

The optical setup combines a Michelson interferometer and a Dowell interferometer [12], placed in the reference arm of the Michelson interferometer. The principle of the measurement is illustrated in Figure 1 and described in detail in [9,13]. A parallel beam, generated by a broad-band (e.g., white-light) source, is divided into two parts by semireflecting mirror M1. The resulting measuring beam goes through a couple of compensating plates CP1 and CP2 and after that is reflected back by a reference surface RS.

The principle of the measurement is based on low-coherence interferometry taking advantage of low-coherence properties of the broadband light source. In the range of the movable reference surface RS shift, there are three positions where the white-light beams interfere. In the block diagram of the experimental setup shown in Figure 1, these positions are marked as P1′, P2′ and P3′.

In the P1′ position, the Michelson interferometer measuring beam interferes with the pair of beams passing alongside the measured gauge block. In fact, this is equivalent to a configuration with a mirror in a position marked as P1 (see Figure 1). P1 is at the mean optical path length of the ring interferometer and for the gauge block length measurement, it plays the role of the reference position.

The solution of the problem can be employed by the interference of reflected beams coming from both sides of the inspected gauge block (see Figure 2). We assume a coherent light instead of the white light in this case. If the gauge block is in the right parallel position to the propagating coherent beams in the Dowell interferometer then we observe a surface interference fringe at the unused output of the Mirror M2. If the block is slightly misaligned from the parallel position then the numbers of surface fringes increase or the interference pattern is not visible.

In the new approach of the complex optical setup shown in Figure 2, a single beam combining red HeNe radiation and white-light source radiation is used [14,15]. Using of a large single beam integrates coherent laser interferometer and white-light interferometer into a single measuring system working under the exactly same conditions. The beam of the single-mode laser is combined by an optical fiber coupler with the broadband light beam. In the presented system, a broad-band near infrared radiation generated by supercontinuum NKT laser (1.5 W SuperK Extreme Versa, NKT Photonics, Denmark) is used.

The detection chain of the new complex system for the contact-less measurement of the gauge block length has to be modified to be able to split the single mode and broad-band radiation. In the new version, the 633 nm laser radiation and the broad-band radiation are separated by a specially designed and made optical splitter. In combination with a couple of photodetector arrays, the splitter form a detection unit used in the presented system (Figure 3).

In combination with a photodetector array, the beam combining both types of radiation can be spatially divided into a number of autonomous interferometers giving the information about the relevant part of the measuring object and the measuring system itself over the whole beam diameter.

The array of photodetectors used in the HeNe radiation way detects interference fringes generated by the movement of the reference mirror RS of the contact-less interferometer. On basis of the digital signal processing we obtain similar values as from two incremental interferometers A and B in the previous presented setup (Figure 1).

4. Algorithm of the Active Stabilization of Gauge Block in the Interferometer

The image analysis employs the “flooding technique” working with gray scale images [17]. In the first step, the value of the mean intensity in the investigated area is determined. Then, the value is used as a threshold separating areas of higher and lower intensity. The resulting image is then analyzed again to identify of areas representing interference fringes—minor areas (up to 100 pixel clusters) are regarded to be a noise and they are not taken into account. Finally, the image analysis procedure gives a number of identified interference fringes in the longitudinal and lateral direction (Figure 5). If the number is greater than 1 or if the number of interference fringes cannot be evaluated, the software readjusts the voltage on an adequate PZT transducer built into the gauge block holder to optimize the gauge block position in the system. For each image, several X and Y sections are analyzed for clear identification of all interference fringes and their orientation. For cases of gauge blocks with shape imperfections, the number of iterations is limited to 10. Then, the software carries out the length measurement or marks the gauge block as defective.

The hardware components of the servo-loop chain realizing the gauge block holder positioning are AD/DA converter and high-voltage amplifier. The AD/DA card is equipped with three analog outputs, each connected to 18-bit DA converter. Then, the signal is amplified by the high-voltage amplifier to cover the range from 0 V to 150 V for driving of the PZT transducer. The used electronics were designed at our institute. Communication between a personal computer and the electronics is ensured by a CAN bus.

In the output of the triangular optical setup, the relation between the mutual angle of interfering beams axis and a period of a spatial interference structure is in case of two-beam interference given by Equation (2):

where P is a period of a spatial interference structure (period of interference fringes), λ is a laser radiation wavelength and α is the half of mutual angle of interfering beams axes and β is the angular change of the gauge block placed in the triangular optical setup (Figure 5). In the designed experimental setup, the gauge block holder contains PZT transducers with a maximal stroke of 15 μm, which allows alignment of the gauge block axis to the measuring beam axis in a range of tenth of milliradians. 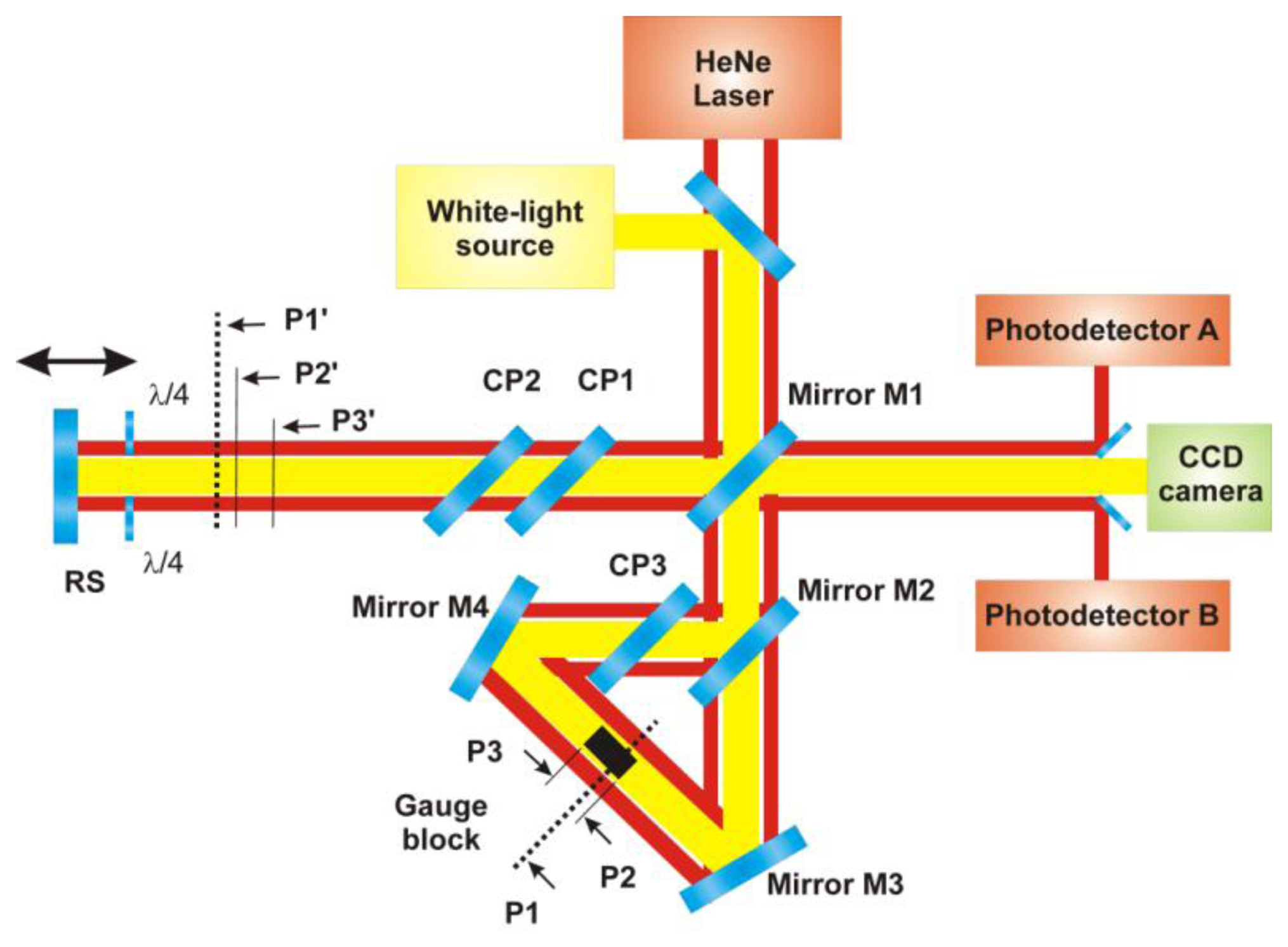 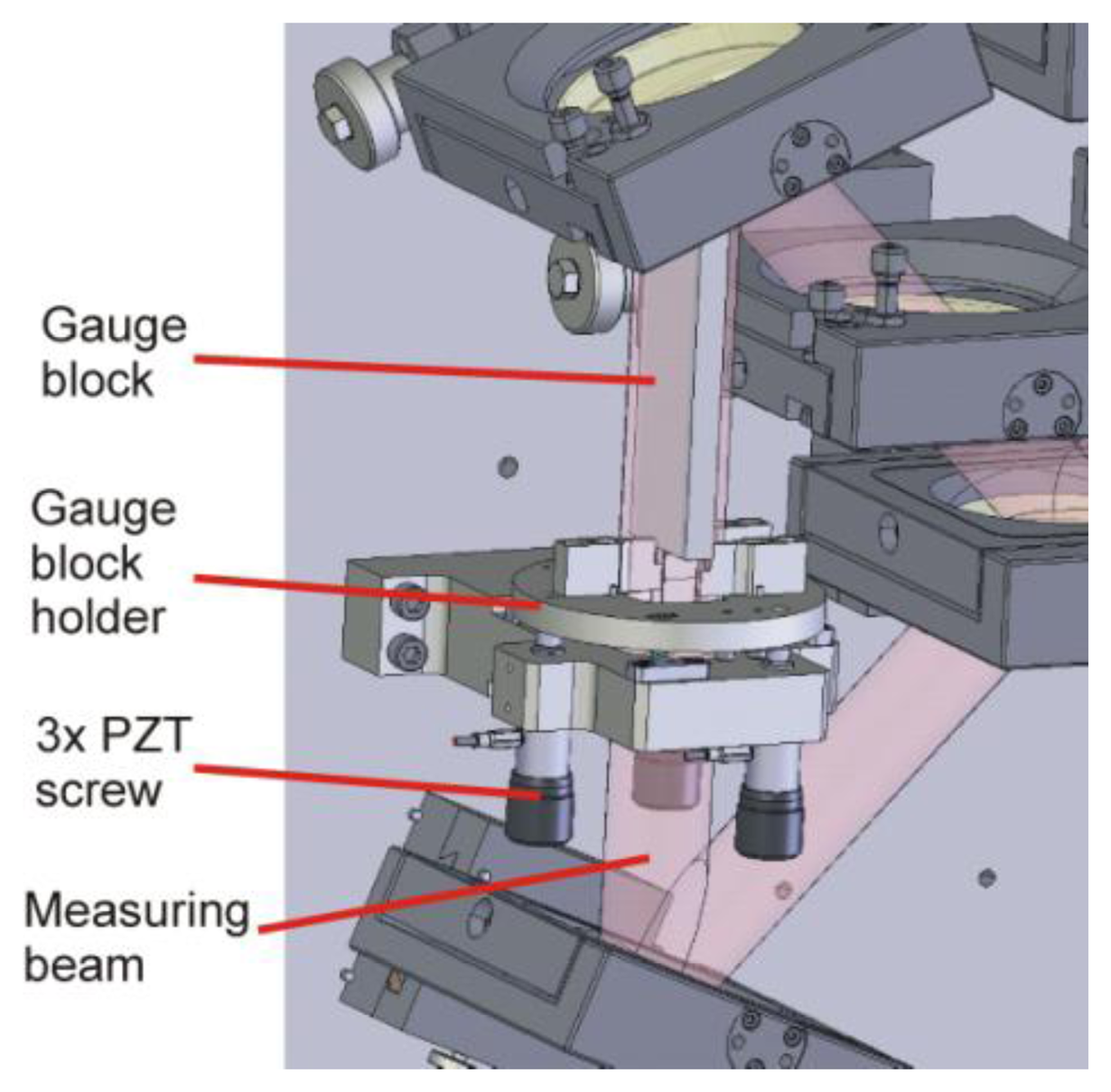 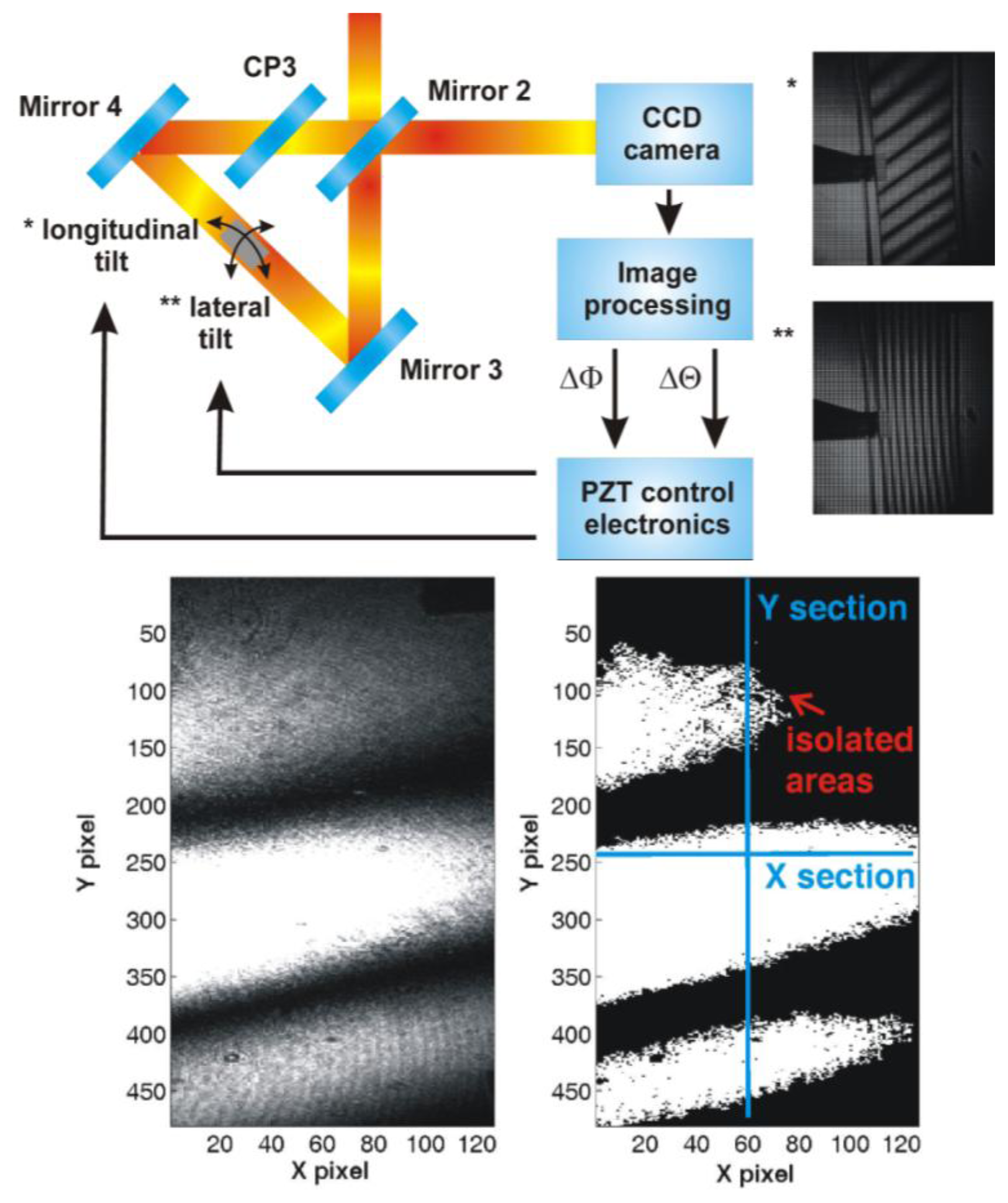