Quorum Sensing and Expression of Virulence in Pectobacteria

From a practical point of view, a contactless calibration technique could be a useful alternative to the techniques used nowadays. The main advantage is a possible automation of the calibration process.

Low-coherence interferometry is a powerful diagnostic technique which has become an attractive and a useful method for fast and accurate 3D inspection of macroscopic objects. Typical fields of application of white-light interferometry are contactless surface measurement of macroscopic objects, surface roughness and quality assurance, measurement of the thickness of thin films and optical tomography.

The presented optical setup combines a Michelson interferometer and a Dowell interferometer [11], placed in the reference arm of the Michelson interferometer. The principle of the measurement is illustrated in Figure 1. A parallel beam, generated by a white-light source, is divided into two parts by semireflecting mirror 1. The resulting measuring beam goes through a couple of compensating plates CP1 and CP2 and after that is reflected back by a reference surface RS.

The principle of the measurement is based on low-coherence interferometry taking advantage of low-coherence properties of the broadband light source. In the range of the movable reference surface shift, there are three positions where the white-light beams interfere. In the block diagram of the experimental setup shown in Figure 1, these positions are marked as P1′, P2′ and P3′.

In the P1′ position, the Michelson interferometer measuring beam interferes with the pair of beams passing alongside the measured gauge block. In fact, this is equivalent to a configuration with a mirror in a position marked as P1 (see Figure 1). P1 is at the mean optical path length of the ring interferometer, i.e., the equidistance plane for both clockwise and anti-clockwise propagation after mirror 2, taking into account CP3. For the gauge block length measurement, it plays the role of the reference position.

For illustration, an interference detecting signal (IDS) record is shown in Figure 3. The signal was recorded during a pilot gauge block measurement experiment and it represents a correlation coefficient value resulting from a comparison of two sequential samples of the output beam intensity. In the designed system, this signal is used for an automatic detection of the measuring positions. In the case shown in Figure 3, a gauge block with the length 17 mm was measured.

The gauge block measurement process is controlled by special software which was designed for the positioning control of the reference surface RS and the online acquisition of the signals from the photodetectors and a CCD camera. The measurement control process is based on monitoring the IDS signal during a fast positioning of the reference surface. The interference of the output beams is detected as a drop of the IDS signal. In this case, the motorized stage is switched off and the interference signal is measured by means of a PZT driven stage. The measuring positions P1′, P2′ and P3′ are localized by a central point detection algorithm implemented in the measurement control software. The measured values of positions P1′, P2′ and P3′ has to be corrected to respect the phase shifts caused by light beam reflections and parameters of the optical components used. The reference surface RS was made from the same material and by the same way like standard gauge block. Due to this fact, the estimated phase step on reflection is for positions P2′ and P3′ the same for the reference surface and for the gauge block and for steel gauge blocks it doesn’t need any other correction. In the case of position P1′, there is no additional reflection on the gauge block surface. This makes the measured P1′ position different from the right one and the total gauge block length seems to be longer than it in fact is. For P1′ correction, the missing phase step on reflection has to be taken into account—the phase step on reflection is 160° for the steel gauge block, which is the mean value calculated for the visible part of the optical spectrum using the optical constants published in [12]. Furthermore, the measured gauge block length (GBL) is calculated by the Equation (1):

By using of the CCD camera as a photodetector, this measuring principle allows measurement of the gauge block length in a number of points for verification of gauge block flatness and parallelism.

The measurement setup is shown in Figure 4. It is arranged on a massive base plate made of gray iron with a thermal expansion coefficient of 12.3 × 10−6 K−1. The optical components are put into 3″ gimbal transmitting mounts TRANS 90G (OWIS) optimized for a maximum aperture. These transmitting mounts are combined with goniometers with a range of adjustment of ±10° designed and made for precise rotation of the optical components around a defined optical axis. The final adjustment can be fixed with a screw. The used transmitting mounts are made from aluminum alloy with a declared thermal expansion coefficient of 23.5 × 10−6 K−1 and the gauge block holder and the reference surface holder are made from steel with a thermal expansion coefficient of 10.6 × 10−6 K−1.

The positioning of the reference surface is ensured by a combination of a LIMES 80-100-HiDS (OWIS) motorized positioning stage and a reference surface holder supplemented—like the gauge block holder—by three PZT screw actuators (Thorlabs). The travel of the Limes stage is 105 mm with a spindle pitch of 1 mm and 2,000 steps per revolution. The screw actuator with PZT provides 4 mm of manual coarse travel via a 0.25 mm pitch leadscrew. The 150 V internal piezo stack provides 15 μm of open-loop piezo travel and an 18-bit DA converter used in control electronics allows extremely fine positioning of the reference surface.

The combination of these two types of actuator meets the requirement for reference surface positioning in the 100 mm range with subnanometer resolution. In addition, using three PZT screws allows an online correction of the main stage pitch and yaw deviations.

Except for the main part of the optical setup, the measurement system was designed as a modular device. The sources of white-light and laser radiation and the detection system are made as separate modules to allow precise adjustment out of the system.

The base plate with the optical setup, shown in Figure 4, is oriented to the vertical position to respect the international standard EN ISO 3650 which requires the vertical calibrating position for gauge blocks of up to 100 mm in length.

The whole optical setup is covered by a double shielded housing for minimization of refractive index of air fluctuations. The value of the refractive index of air is calculated from measured atmospheric parameters by means of the Edlen formula and it is used for an online correction of the HeNe laser wavelength with 1 × 10−7 precision [14,15]. In addition to an ambient temperature measurement, there are three temperature sensors monitoring the base plate temperature for corrections of the optical path dilatation during the gauge block measurement process.

The described method was designed to be an alternative for the methods presently used for gauge block calibration. In comparison with the current methods, the key advantage of the presented optical setup is its contactless measurement of the absolute gauge block length, which is fully automatic, with no operator influence. Because of the automatic measurement process, a set of gauge blocks could be measured one by one without delay caused by waiting for temperature stabilization of each block. As for the time required for the diagnosis of one gauge block, it depends mainly on the set motorized stage and PZT scanning speed and this has to be set with respect to the electronics used (CCD cam frame rate, laser interferometer detection unit sensitivity and maximal sampling rate,…) and detection techniques (in our case, coherent correlation technique [16] for white-light fringe center detection and homodyne detection technique for laser interferometers). In the experimental setup in our lab, the diagnostics of a gauge block of 20 mm length takes about 120 s. During the pilot experiments, the repeatability of the measurement was tested. Generally, it depends on the measurement conditions, setup mechanical stability and also on used central fringe detection technique. For the described experimental setup, a standard deviation of six consecutive P1′ position measurements was 7.3 nm.

The measurement uncertainty given by mechanical parameters of the experimental setup is calculated as a combined standard uncertainty using the values presented in Table 2.

In our setup version, the estimated relative uncertainty value is 2.0 × 10−7. 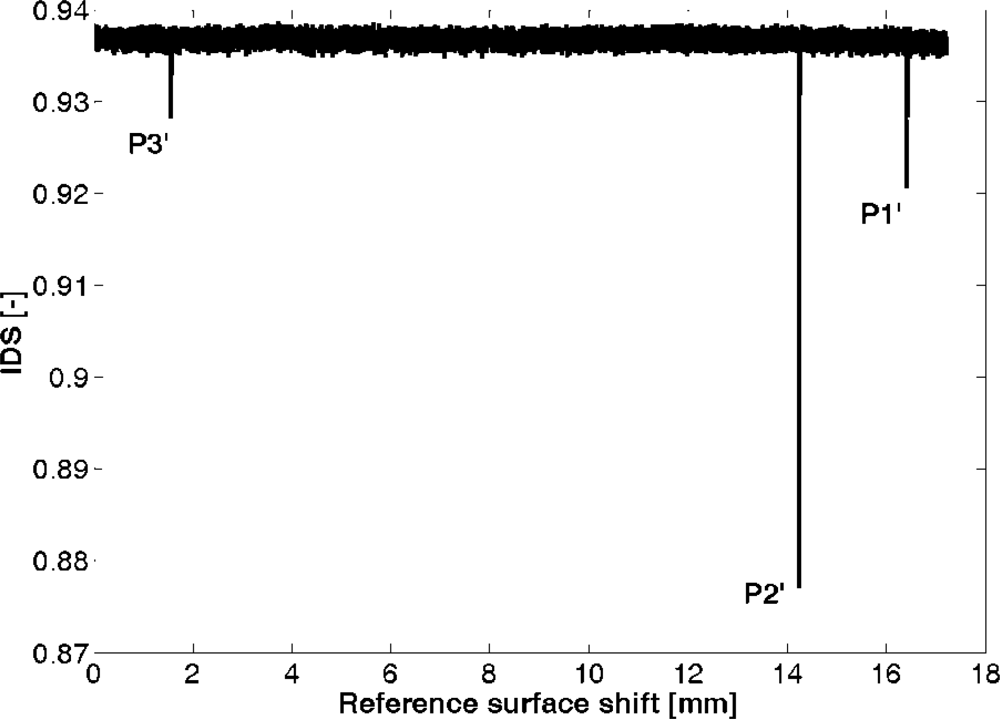