Methanol is a more feasible liquid fuel for use in a reformer owing to its high safety of storage and transport, high carbon/hydrogen ratio, high power density and low reforming temperature (250–300 °C) [1]. However, the technology application-related problems related to its use include starting time and power density. Also, how to produce hydrogen efficiently and steadily is another important concern.

Liu and Yang have used polyimide as the substrate material for a flow sensor [2,3], while Chuang fabricated a micro temperature sensor and micro heater on poly-dimethylsiloxane (PDMS) film [4]. Bielska [5] used polyamide foil as the basic material and fabricated gold and copper electrode on it by using micro-electro-mechanical systems (MEMS) technology. The temperature is evaluated at a range of 30 °C to 42 °C, and the resistance change is used based on the temperature to study its linear outcome.

Zhang [6] fabricated platinum/titanium on Pyrex 7740 glass based on the use of MEMS technology, while simultaneously using the heater as temperature sensor. Platinum and titanium are then deposited using an E-beam evaporator, followed by completion of the sensor shape by using the lift-off method.

Based on use of MEMS technology, Shih [7] fabricated platinum/titanium on a silicon wafer to be used in temperature gradient interaction chromatography, in which a layer of parylene is deposited around the sensor to become an air gap to increase thermal isolation and decrease heat loss.

Xiao [9] developed an inexpensive and flexible micro temperature sensor by using low pressure chemical vapor deposition to deposit phosphosilicate glass to be the sacrificial layer. A layer of polyimide was also coated, followed by use of MEMS technology to fabricate platinum on polyimide. The subsequently flexible sensor can remove the sacrificial layer and does not limit the position of a sensor.

Despite macromolecular advantages such as thermal stability, high dimensional stability, and low permittivity, the temperature change is slightly too large. This work attempts either to prevent the film and basic material from flaking off or to decrease the yield rate from the heat stress by using stainless steel foil for a flexible base material of 40 μm thickness. Stainless steel foil must have high corrosion resistance, high compression resistance, high temperature resistance and high flexibility. This work attempts to decrease the interference of a methanol reformer and diagnose the inner environment immediately by using thin metal foil as the substrate material of the proposed micro sensor.

This section comprises descriptions of a micro flow plate and a micro temperature sensor.

The micro flow plate is used in various technologies, in which the appearance of a flow changes with the miniaturization of a flow plate. Thorough elucidation of the characteristics of a flow would increase the scope of potential applications. Design of a flow channel inside the micro reformer must consider the following factors: heat conduction rate and methanol/air mixing rate, pressure decrease and pressure distribution, catalyst reaction area and chemistry reaction flow direction, flow rate distribution, mass transfer rate and concentration distribution, as well as viscous energy energy-dissipating and divergence heat transfer [10]. Based on the above factors, the design of a planner flow channel is adopted, as described in the following section

2.2. Design of a Micro Temperature Sensor

Conventionally adopted sensors can be classified as contactless or contactable, depending on their sensing mode. Contactable sensors can be classified as resistance temperature detectors, thermistors, thermocouples and mercury thermometers. Additionally, contactless sensors can be categorized into pyroelectric and quantum temperature sensors. Regardless of whether a contactable or contacless sensor is considered, too large of a volume interferes with the flow and increases the complexity of packaging, making it impossible for them to integrate with a micro channel. Given that a small volume, high precision, production batch and low cost characterize micro sensors based on MEMS technology, this work presents a flexible micro temperature sensors based on this technology.

2.3. Fabrication of a Micro Flow Plate

A micro flow plate is manufactured based on MEMS technology, in which SUS 304 is used as the substrate and the thickness of SUS 304 is 600 μm. Figure 3 illustrates the process. An E-beam evaporator is used to deposit 500 Å of titanium on stainless steel to function as a sticking layer, followed by use of spin coater coating Hexamethyldisilazane (HMDS) as the sticking layer for the photoresist. Photoresist AZ-4620 is then coated on stainless steel to function as the etching mask. Next, an aligner and mask are used to make a transition graph for the photoresist, followed by use of MP2500 + H2O to define the pattern. Following development, titanium and aqua regia are etched using hydrofluoric acid to etch stainless steel, followed by removal of the titanium mask and photoresist. Next, pattern is cut to the desired shape by wire cutting. Figure 4 illustrates the finished product.

The material of the micro temperature sensor is gold, and 40 μm thick stainless steel foil was used as the substrate. Regardless of whether wet etching or metal lift-off is used, a layer of insulating material is coated, explaining our use of RF sputter to grow 1,000 Å of aluminum nitride (AlN).

3.1. Inner Temperature Distribution of a Micro Temperature Sensor during OSRM Reaction at 270 °C

In this study, CuPd/CeZn was selected as a reforming catalyst. The composition of catalyst is CuO-35wt%, PdO-2wt%, CeO2-20wt%, and ZnO2-43wt%. The catalyst (30 mg) was washcoated on a micro channel [11]. Figures 8 to 10 illustrate the upstream, midstream and the downstream temperatures of inserted flexible micro temperature sensors during an oxidative steam reforming of methanol (OSRM) reaction. Under the same operating environment, methanol conversion can achieve 100% at 270 °C, as long as the temperature is maintained during inner measurements. The upstream reveals that the temperature responsively rolls acutely, normally ending in 1–3 cycles. We posit that the inner reaction transforms into an exothermic reaction in a relatively short time.

3.2. Inner Temperature Distribution of a Micro Temperature Sensor during OSRM Reaction at 300 °C

As time advances, our results indicate that the methanol conversion rate has decreased gradually, implying decreasing catalyst activity. Therefore, raising the reaction temperature to 300 °C facilitates the catalyst reactivation. Figures 11 to 13 reveal that the upstream, midstream and the downstream processing undergo partial oxidation of methanol (POM) and oxidative steam reforming of methanol (OSRM) and steam reforming of methanol (SRM) obviously. The maximum temperature upstream is approximately 800 °C, in which the average temperature is around 450 °C. However, the reaction time is extremely short.

This work successfully integrates a micro reformer and flexible micro temperature sensors to alleviate the pressurization problem. Heat tolerance of the printed circuit board is also increased, which involves the bonding breakout of printed circuit boards in order to devise a standardized procedure. Micro temperature sensors contribute significantly to the partial measurement in a micro methanol reformer by measuring more deeply than an external measurement does. This work successfully integrates micro temperature sensors inside the micro methanol reformer to measure the inner condition the reformer immediately, ultimately providing further insight into the inner temperature distribution during the oxidative steam reforming reaction of methanol.

This work was accomplished with much needed support and the authors would like to thank the financial support of this research from the aim for the top university project of Ministry of Education of R.O.C. and YZU Fuel Cell Center through the grant No. 217019 and National Science Council of R.O.C. through the grant NSC 98-2627-M-155-003. The authors also like to thank Shih Hung Chan, Kuen Song Lin, S. D. Lin, Ay Su, Fangbor Weng, Guo Bin Jung of the Yuan Ze University for their valuable advice and assistance with the experiments. In addition, we would like to thank the YZU Fuel Cell Center and NENS Common Lab for providing access to their research facilities. 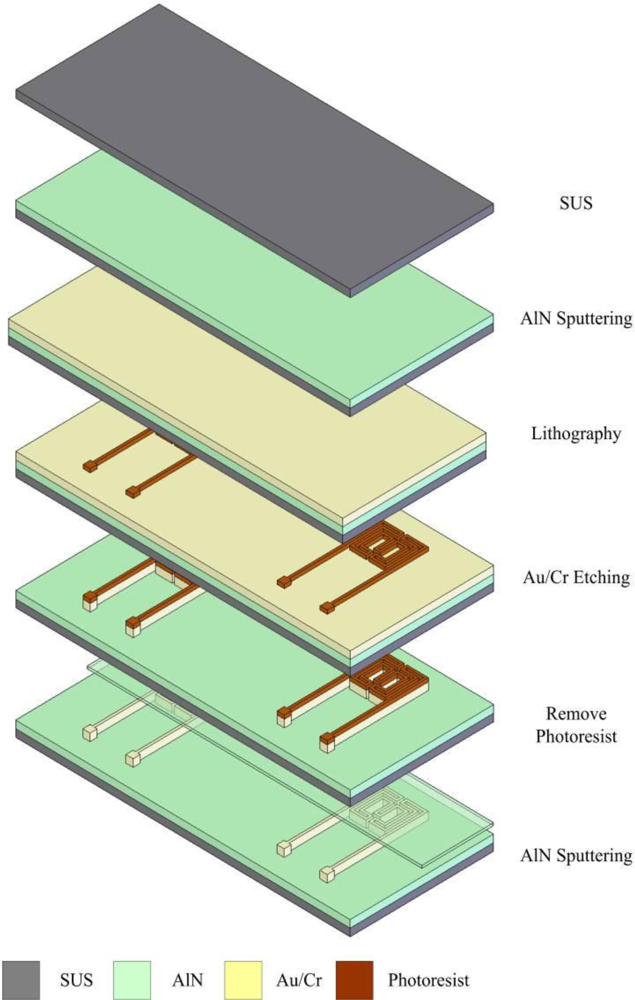 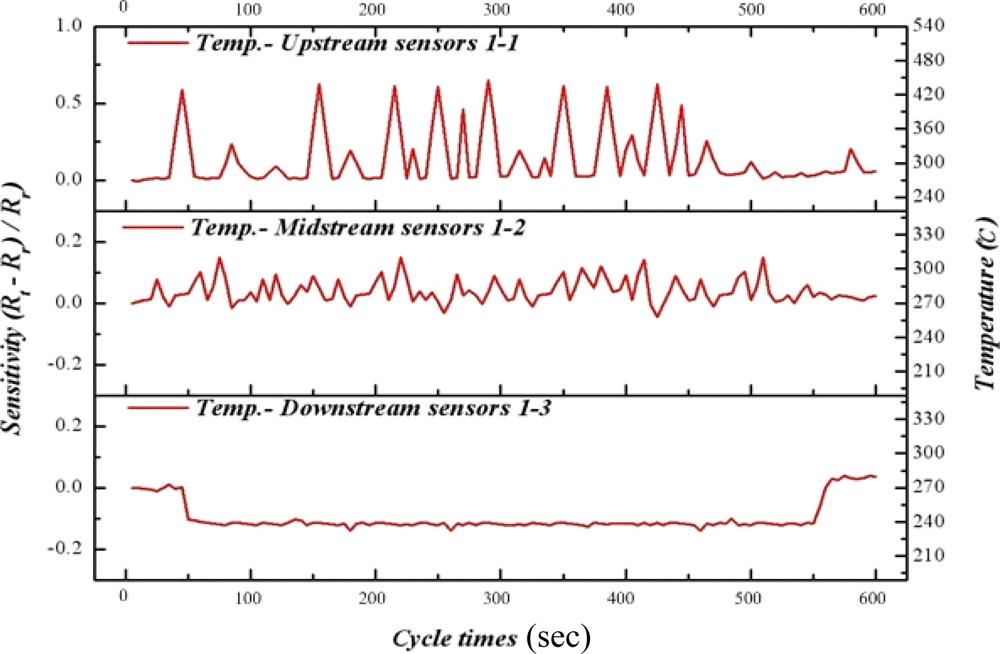 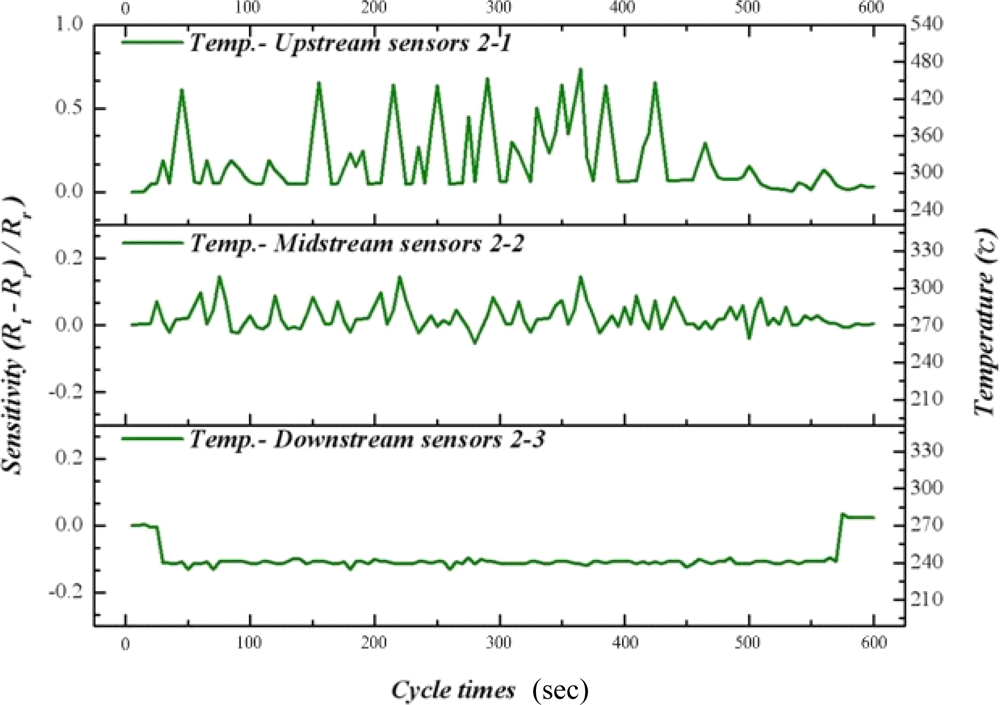 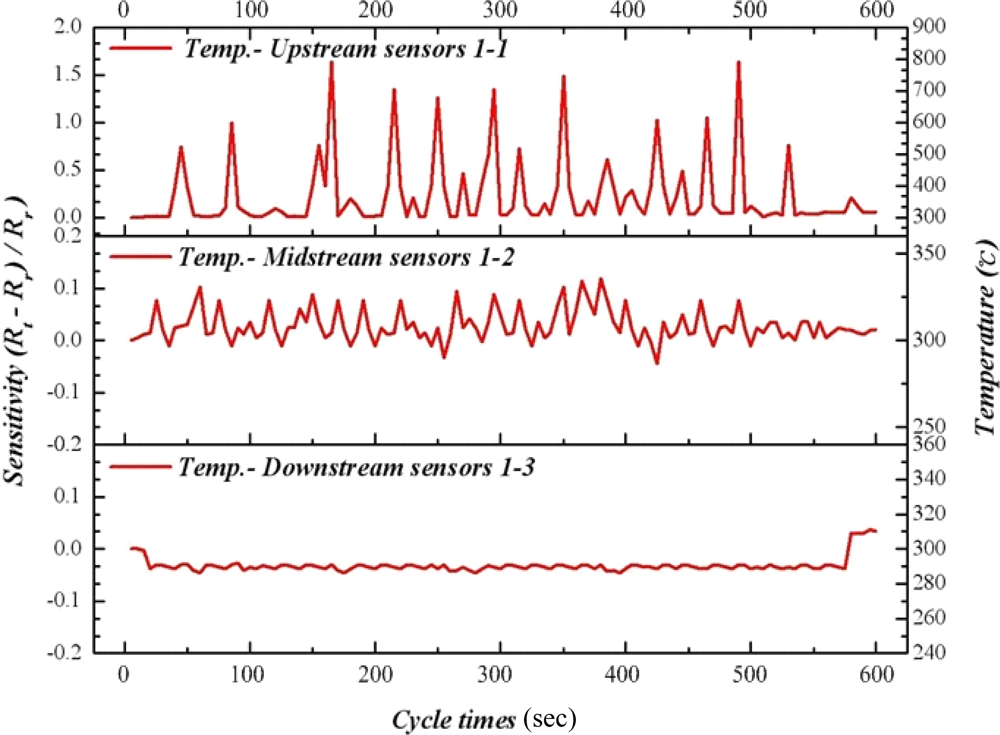 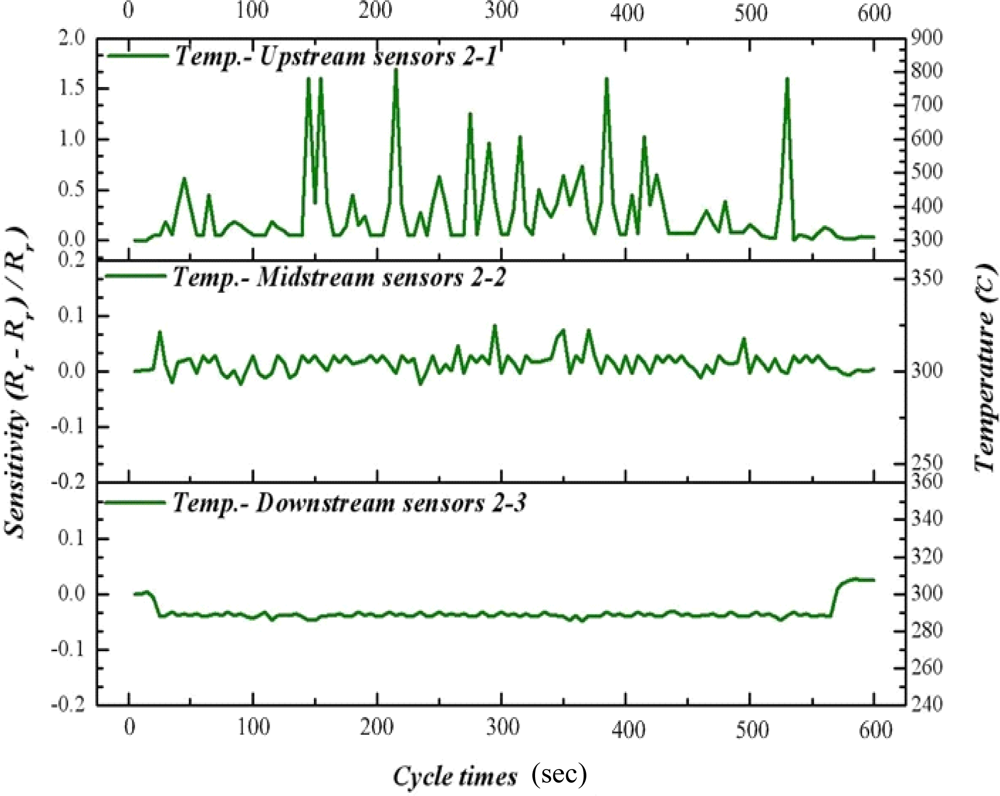 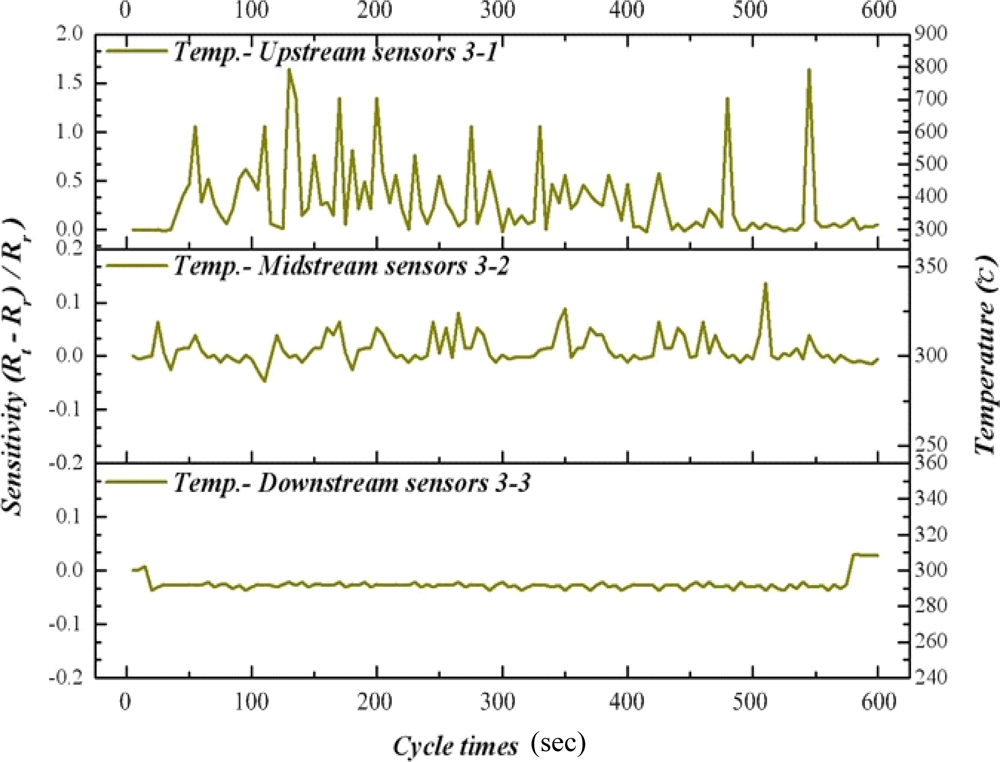