The techniques to determine the size distribution and concentration of aerosol particles are of high interest in the field of air quality control [1]. Optical detection is the most common method used to measure particle concentration. A bio-aerosol fluorescence sensor has been developed and was field tested by Reyes et al., and the sensor performed very well in field trials [2]. Davitt et al. demonstrated a compact system which incorporates a 32-element linear array of ultraviolet light-emitting diodes for the in-flight fluorescence detection of aerosolized particles. This ultraviolet diode array detected the emission from nicotinamide adenine dinucleotide and tryptophan in aerosol samples with high performance [3]. Ouazzani and Bentama used a photo-interrupt sensor to measure the cake thickness of biological particles [4]. This technique can be applied to the filtration process of a yeast (Saccharomyces cerevisiae) suspension. Zemlyanov and Geints reported a method using femtosecond laser pulses to illuminate water droplets, and the scattering effects were then evaluated for calculating the aerosol concentration [5].
Although there have existed numerous promising techniques for measuring aerosol concentration, these developed instruments are often too complicated and bulky for in-situ applications. Recently, the miniaturization of the instruments for air quality inspection has become an emerging field. It might provide more functionalities of the system and often decreases costs. In addition to optics, there remain some other methods for detecting particles that can be used in a miniature system. For example, the variation of electric signals can be a good index for counting biological cells, although such a system is always used in fluids [6,7]. In aerosol technology, the so-called virtual impactor which could separate different kinds of particles by their inertial forces is widely used for concentrating aerosols. Haglund and McFarland have developed a circumferential slot virtual impactor to be an aerosol concentrator [8]. The collection efficiency was greater than 72% for all particle sizes larger than three times the cut-off point up to the largest particle size tested, and the peak collection efficiency for the device was greater than 95% [8]. However, their device is still bulky and cannot be integrated into a miniature system. By utilizing micromachining techniques, Lim et al. and Maeng et al. have successfully miniaturized a cascade virtual impactor [9,10]. Nevertheless, an associated miniature system for directly measuring the mass concentration and size distribution of aerosols is still lacking.
In this paper we propose a miniature system which possesses the functions of separating and concentrating aerosol particles and measuring the mass concentration. Specifically, two virtual impactors are used to separate and concentrate aerosol particles, and two quartz-crystal microbalance (QCM) sensors are used for measuring the mass concentration. The QCM sensor has the advantage of the high sensitivity of its resonance frequency shift in response to mass loading. It also has very short response time and hence is suitable for real-time sensing applications [11,12]. A typical QCM sensor is made of a quartz-crystal disk sandwiched by gold electrodes. If aerosol particles precipitate onto the electrodes, the total mass of the sensing system will increase, causing the resonance frequency drop of the QCM sensor. The frequency shift is more prominent if there are more aerosol particles on the electrodes. Because the aerosol particles usually have a large variety of material compositions, it is difficult to capture aerosol particles properly on the metal electrodes by using specific binding mechanisms. In this paper, physical adhesion is employed to capture aerosol particles on the metal electrodes. To enhance the adhesive force on the metal electrodes, special coating on the surface of the QCM sensor is developed. The miniature system proposed in this paper is shown in Figure 1. It consists of two virtual impactors and two QCM sensors. The system is integrated by embedding the QCM sensors into three-dimensional microchannels which serve as virtual impactors. The virtual impactors separate the particles into three groups of different sizes, and the mass concentrations of two of the groups are measured by the QCM sensors. In this paper the design principles of the virtual impactor will be given first. Then the QCM sensor with the associated coating and characterization method will be introduced. The fabrication of the devices will be given. Then the characterization results of the virtual impactor and the QCM sensor will be shown, respectively. Finally, the integration, testing and verification of the miniature system for separating aerosol particles and measuring the mass concentration will be given.

The virtual impactors are made of bulk polymethylmethacrylate (PMMA). The PMMA material is easy to machine and low-cost. The microchannels and the QCM holders in the virtual impactors are fabricated by using a computer numerical control milling machine. Because the minimum feature size of the microchannels is 1,800 μm, the size of the mill must be smaller than 1,800 μm. A micro grain carbide end mill (tungsten carbide: colt = 9:1 in weight) is used to machine the PMMA material because it is strong enough to sustain long-time machining process without losing precision. In the machining process, all the corners in the virtual impactor are rounded so that the microchannels will not be clogged by aerosol particles. The fabricated components, including the QCM holder and the substructure with two virtual impactors, are shown in Figure 5.

The characteristic function of the QCM sensor coated with hydro-gel is determined by measuring the resonant frequency shift using an HP4294 impedance analyzer with different particle loadings. The total mass of the loaded acrylic particles on the QCM sensor is estimated by counting the particle numbers from optical images. The characteristic function in Equation (3) can be rewritten in a linear form as:
The coefficients a ≡ m0 / k and b ≡ 1 / k are independent of the mass loading effects and describe the characteristic function. To determine the coefficients a and b, we firstly coat the QCM sensor with hydrogel to improve the surface adhesion. Then the resonant frequency of the QCM sensor is measured, followed by applying acrylic particles on the hydrogel surface. After taking optical images of the hydrogel surface, we count the total number of the acrylic particles in these images using an image processing program. Meanwhile, the resonant frequency shift after loading different numbers of acrylic particles is measured.
It should be noted that the loading weight on a single QCM sensor is too small to be measured using a microbalance. Therefore, an image processing method is employed. Specifically, every single pixel in the image represents a certain number of particles. An image of the particles on the hydrogel layer taken with an optical microscope is shown in Figure 9(a). In additional to optical images, the particles captured by the hydrogel layer are inspected with a scanning electron microscope (SEM), as shown in Figure 9(b). It is found that the particles on the hydrogel may aggregate into more than one layer. These multi-layers are difficult to be observed under optical microscope. In this work, we identify these multi-layers zones through the SEM inspection and then modify the results of the image processing. Each particle with 10 μm in diameter has the volume of 523.6 μm3, and the density of the acrylic particle is 1,190 kg/m3. Hence the weight of each acrylic particle is about 0.6 ng. For an area of 1 cm2 which is occupied by single-layered particles, the mass loading is approximately 76.4 mg. The dots in Figure 10 show the measured correlation between the resonant frequency of the QCM sensor and the mass loading of the particles. A linear relation between 1/f2 and Δm is obtained, as predicted by Equation (4). By fitting Equation (4) into the results of experiment, the characteristic function of the QCM sensor with a = 6.9658 × 10−15 Hz−2 and b = 7.752 × 10−20 Hz−2μg−1 is obtained. The square of Pearson product-moment correlation coefficient of this fitted curve is R2 = 0.994.

The measured particle collection efficiency indicates that the cut-off particle diameters of the fabricated virtual impactors are 3.2 μm and 2.82 μm, respectively. In this aspect, the fabricated virtual impactors can separate particles into three groups of different sizes. The measured cut-off diameters deviate slightly from the designed values. This discrepancy could be caused by the asymmetric flow in the particle deposition, as implied in Figure 9. The asymmetric flow could be due to the machining precision or the assembly of QCM sensors and microchannels.
To determine the characteristic function of the QCM sensors, we assumed that the inverse square of the resonant frequency is linearly proportional to the mass loading and that the stiffness of the QCM sensor is constant. When the mass loading increases from zero to 100 μg as shown in Figure 10, the inverse square of the resonant frequency varies by only 0.17%, which justified our linear model. In addition, the experiment fits the linear model very well. The maximum mass loading in the system-level test is 200 μg, as shown in Figure 12. Hence the same characteristic function can be applied for determining the mass concentration.
The precision for measuring the mass concentration depends on the minimum detectable mass, flow rate and testing duration. In the calibration in Figure 10, the minimum mass loading we have detected is 0.83 μg. For the 0.1 LPM flow rate and 40 minute testing duration, the measurement precision is 0.208 mg/m3. If the testing duration reduces to 1 minute, the measurement precision becomes 8.320 mg/m3. Nevertheless, this precision is sufficient to measure the mass concentration in this work.
In summary, we designed, fabricated, and tested a miniature aerosol sensing system. The virtual impactors successfully separated particles into three particle groups of different diameters. And the integrated QCM sensors and the virtual impactors have been demonstrated to be able to determine the mass concentration of different particle groups. The demonstrated system can be potentially applied to air quality monitoring in the future.

This project has been supported by the National Science Council, Taiwan under the grant number: NSC98-2218-E-002-011. 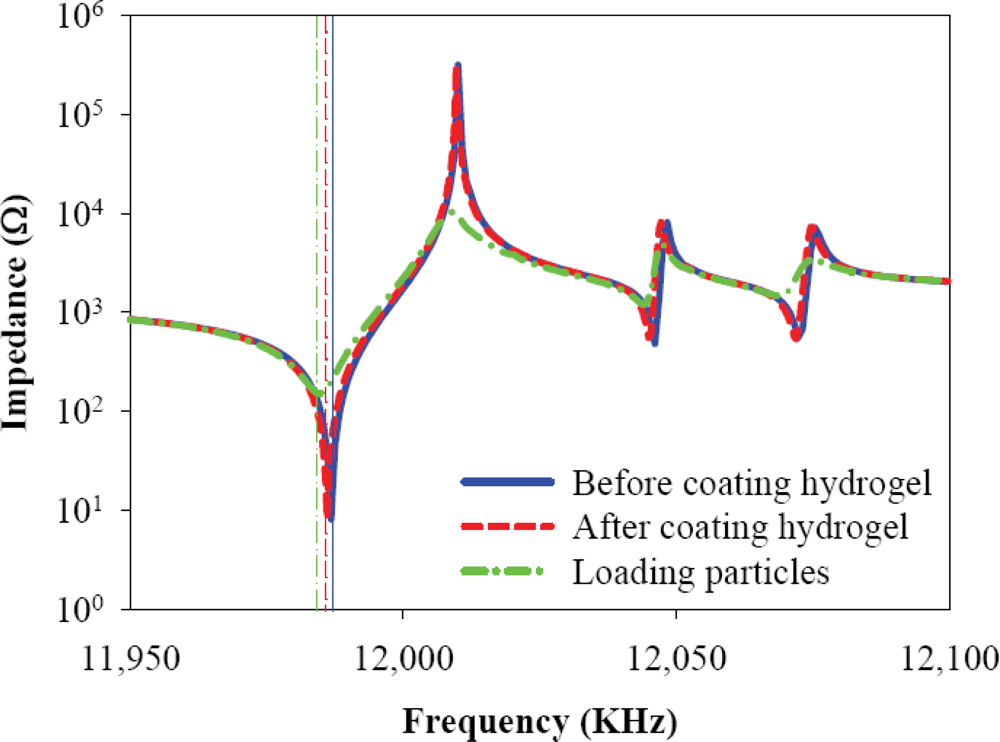 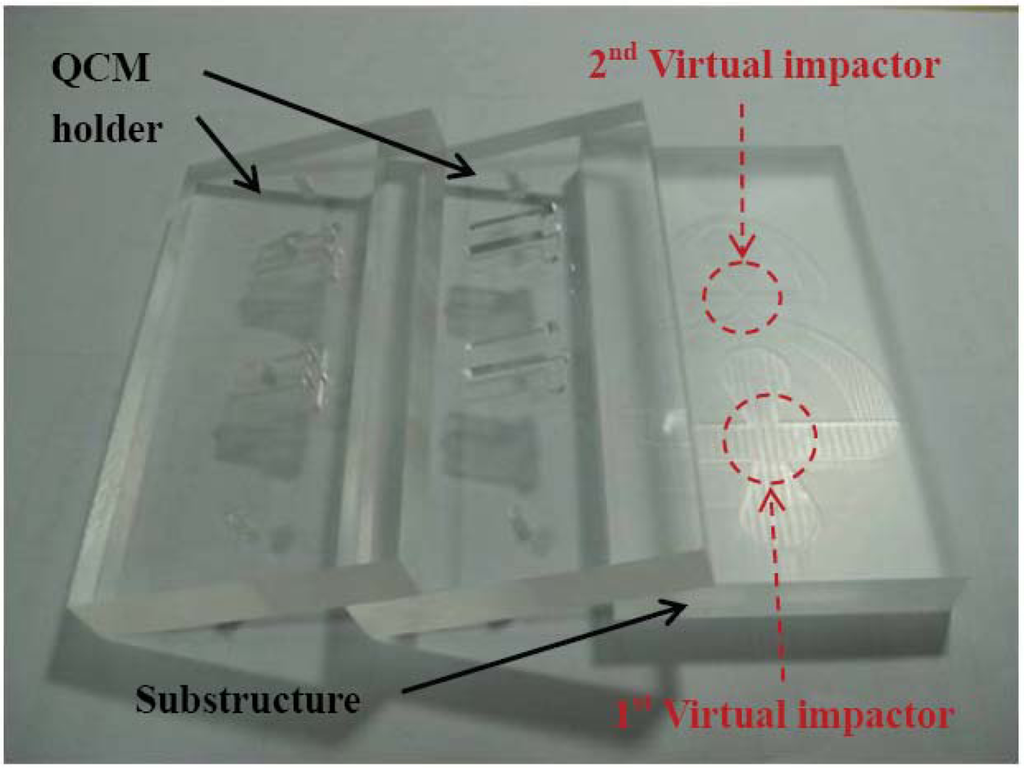 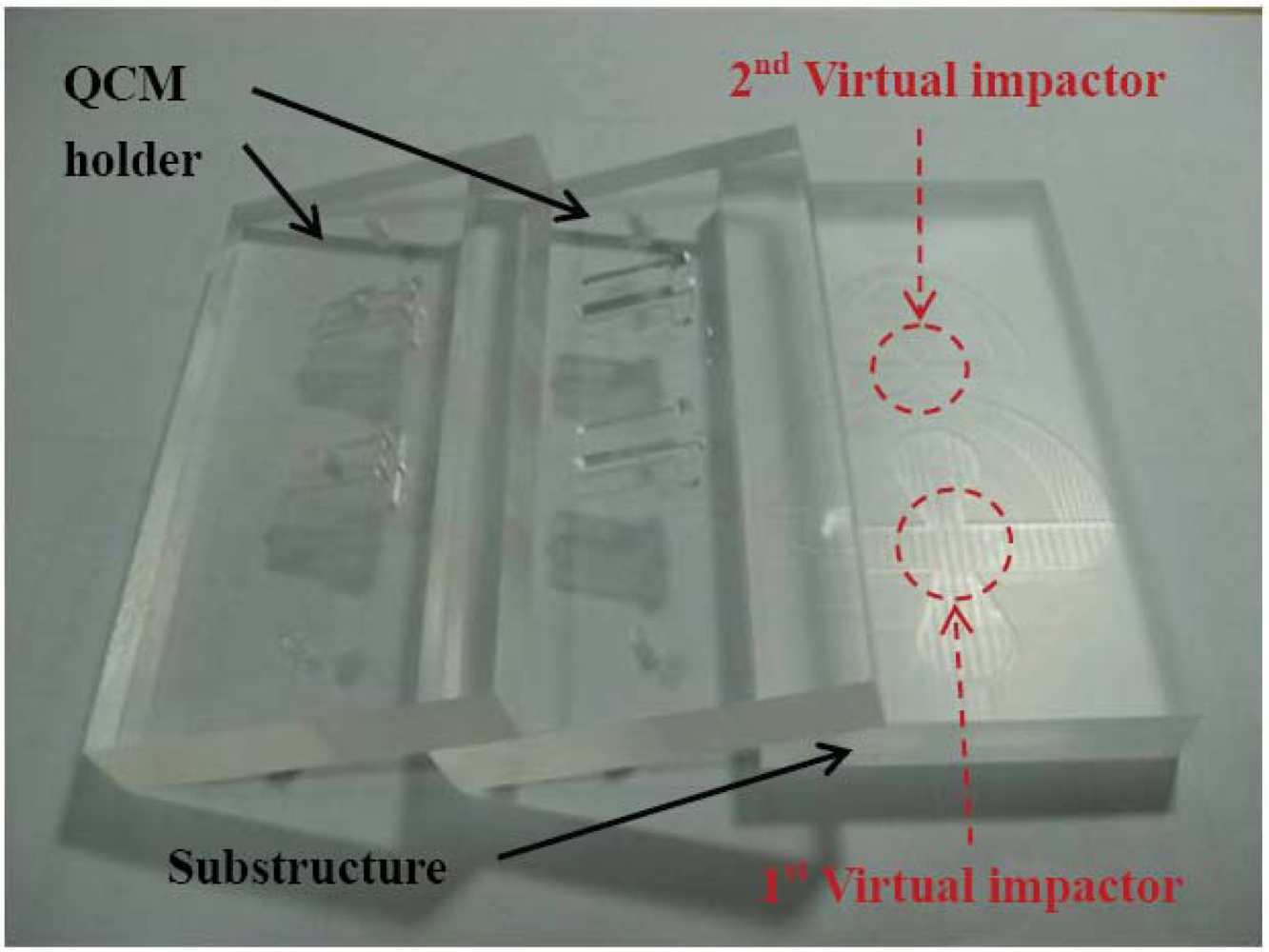 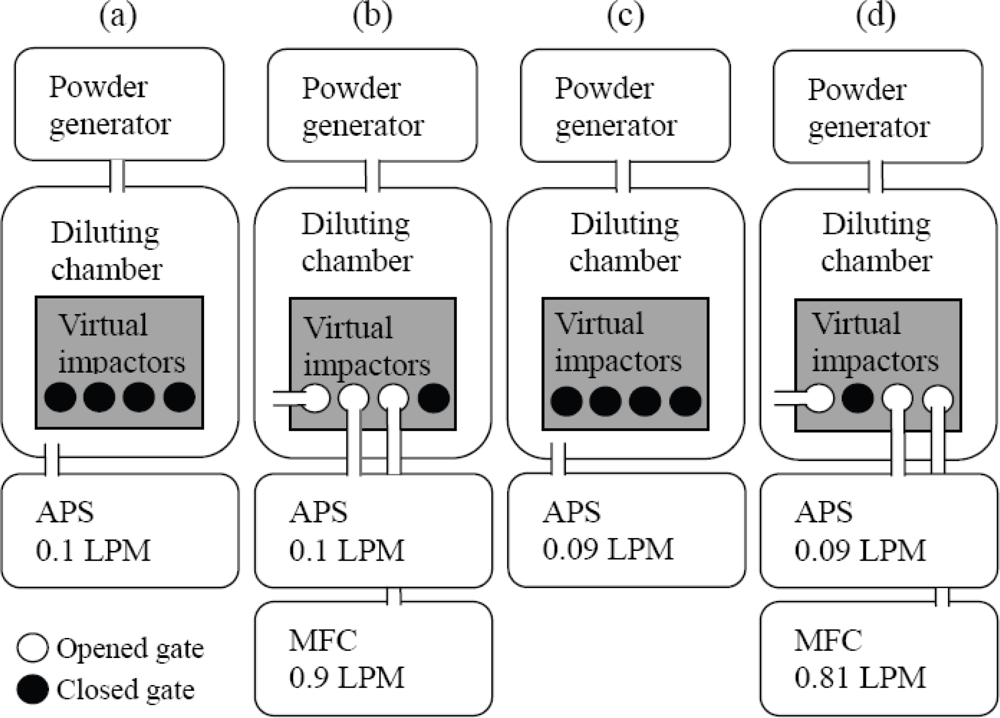 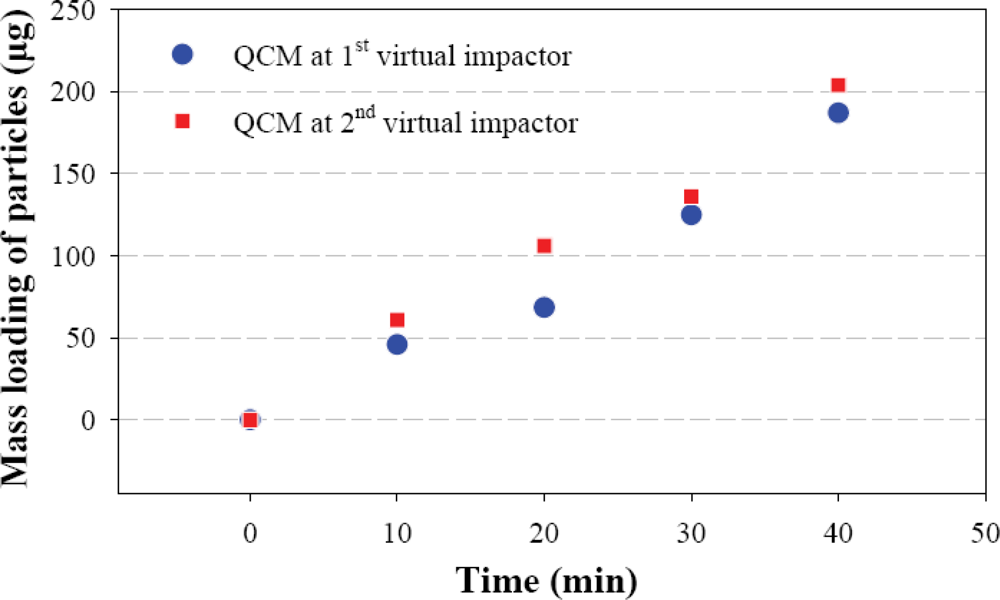 © 2010 by the authors; licensee Molecular Diversity Preservation International, Basel, Switzerland. This article is an open-access article distributed under the terms and conditions of the Creative Commons Attribution license ( http://creativecommons.org/licenses/by/3.0/).