Biodiversity Loss and the Ecological Footprint of Trade

Drastic Population Size Change in Two Populations of the Golden-Striped Salamander over a Forty-Year Period—Are Eucalypt Plantations to Blame?

Over the last half century the Iberian peninsula has seen the large scale planting of exotic gum trees (Eucalyptus sp.) therewith reducing space for native wildlife. An additional effect of the gum tree plantations may be the lowering of the water table in adjacent streams, to which amphibian species with a larval niche in the running sections of small streams would be especially susceptible. In northwestern Iberia that niche is occupied by the Golden-striped salamander, Chioglossa lusitanica. I here report on the demographic trends of two C. lusitanica populations over a forty-year period, in two areas of one mountain range near Porto in northwestern Portugal. In both areas advantage was taken of the migration pattern of C. lusitanica to sites for aestivation and breeding in summer and fall. The area of the Silveirinhos brook was transformed in a plantation of gum trees shortly after the research started, while the area of Poço do Inferno remained virtually unaffected. At Silveirinhos the adult C. lusitanica population declined by one or two orders of magnitude, from ca. 1500 individuals to less than 50 at present. Demographic models that operate under a uniform larval mortality yielded population sizes that are compatible with field observations, including the late onset of the decline at 14 or more years after the planting of the gum trees and the near-extinction at year 32. An alternative reason for the relatively recent population collapse of C. lusitanica may have been disease, but no sick individuals or corpses have become available for clinical investigation. Conversely, the control population at Poço do Inferno increased in size by a factor of five or more. These data support the hypothesis that gum tree plantations have a strong negative effect on C. lusitanica. The population size increase at Poço do Inferno is probably attributable to the installation of wastewater treatment in the adjacent town of Valongo, with a discharge in the Simão river and closely connected to Poço do Inferno. This result suggests that the Simão river contributes to the Poço do Inferno population and that medium-large streams may constitute prime C. lusitanica habitat. Larval mortalities estimated for stable and declining populations are remarkable close (0.69 and 0.73, respectively), but dissimilar to the larval mortality at ca. 0.51 of an increasing population such as at Poço do Inferno. Suggestions for further research include (i) the continued monitoring of the Silveirinhos population with inspections at 5–10 year intervals, and (ii) checking for the persistence of C. lusitanica populations in and around gum tree plantations where the species was reported decades ago. View Full-Text
Keywords: amphibian decline; Chioglossa lusitanica; demographic modelling; gum tree; Iberia; monoculture; Portugal; Urodela; Vortex amphibian decline; Chioglossa lusitanica; demographic modelling; gum tree; Iberia; monoculture; Portugal; Urodela; Vortex
►▼ Show Figures 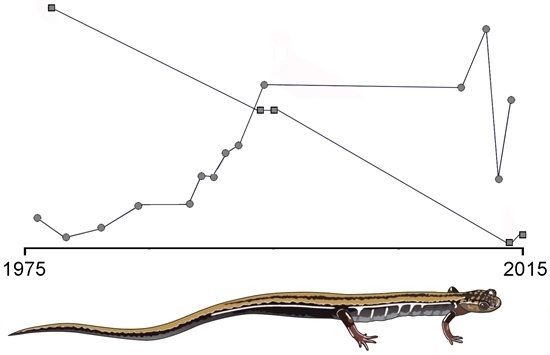