One of the biggest threats to coffee growers in East Africa are emerging vascular wilt diseases (tracheomycosis) caused by Fusarium spp. Many Trichoderma species are known to be natural antagonists of these pathogens and are widely used in biological control of fungal plant diseases. More recently, several Trichoderma spp., which exhibited high antifungal activity have been isolated as endophytes. Consequently, we have investigated the presence and the antagonistic activity of endophytic Trichoderma isolated from roots of healthy coffee plants (Coffea arabica) from the major coffee growing regions of Ethiopia. Our results showed that community of Trichoderma spp. in roots of C. arabica contains fungi from coffee rhizosphere, as well as putatively obligate endophytic fungi. The putatively “true” endophytic species, until now, isolated only from coffee plant ecosystems in Ethiopia and recently described as T. flagellatum and novel T. sp. C.P.K. 1812 were able to antagonize Fusarium spp., which cause coffee tracheomycosis. Moreover, we found that strains of these species are also highly antagonistic against other phytopathogenic fungi, such as Alternaria alternata, Botryotinia fuckeliana (anamorph: Botrytis cinerea), and Sclerotinia sclerotiorum. View Full-Text
Keywords: biocontrol; tracheomycosis; Trichoderma flagellatum; Fusarium sp.; coffee biocontrol; tracheomycosis; Trichoderma flagellatum; Fusarium sp.; coffee
►▼ Show Figures 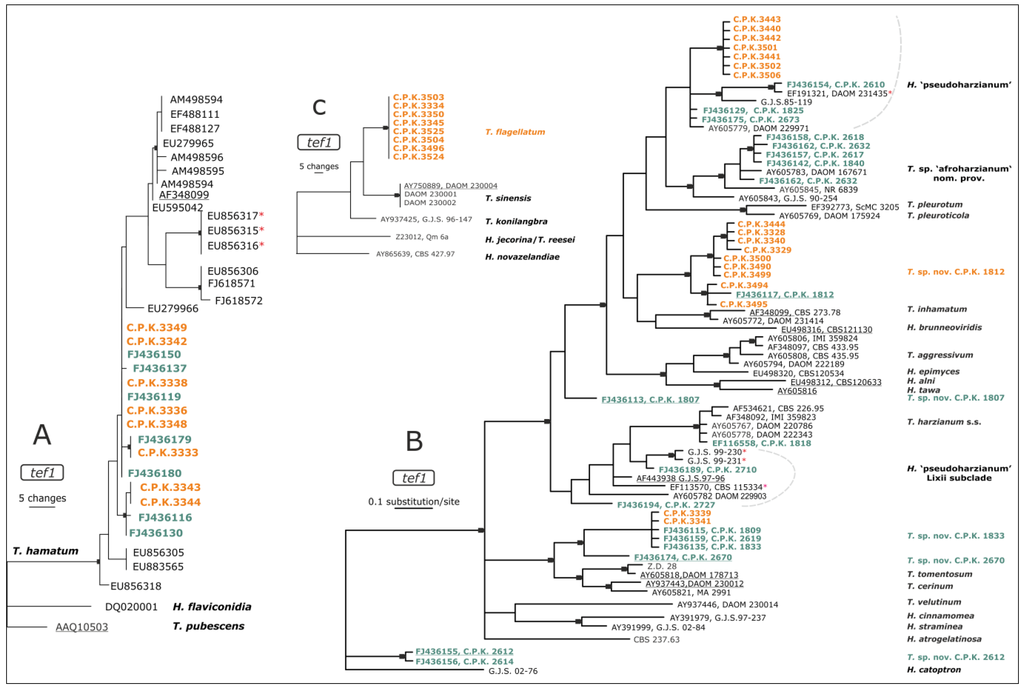