The Mediterranean Sea diversity is still far from being fully disclosed. Marine Heterobranchia are one of the most paradigmatic species-rich groups, with many recent systematic studies revealing the high density of new, cryptic, and endemic species occurring in the Mediterranean basin. In this study, sea slug Doriopsilla areolata, which was considered until today one of the most widespread nudibranchs worldwide, was investigated using a molecular approach to compare Mediterranean and Atlantic populations for the first time. The molecular analyses involved three different molecular markers, the two mitochondrial COI and 16S, and the nuclear H3 gene. The results revealed a complex of species within D. areolata that indeed consists of three potentially species, two of which are endemic to the Mediterranean Sea: Doriopsilla areolata, which is distributed in the Adriatic Sea (the type locality of the former species), D. rarispinosa, which occurs in the Western Mediterranean basin and along the Tunisian coast, and one additional Atlantic species here provisionally defined as Doriopsilla sp. 1. This study helps to unveil another case of cryptic diversity within Mediterranean Heterobranchia and to increase the knowledge on Doriopsilla genus diversity. View Full-Text
Keywords: Heterobranchia; Nudibranchia; phylogeny; evolution; species identification; species complex Heterobranchia; Nudibranchia; phylogeny; evolution; species identification; species complex
►▼ Show Figures 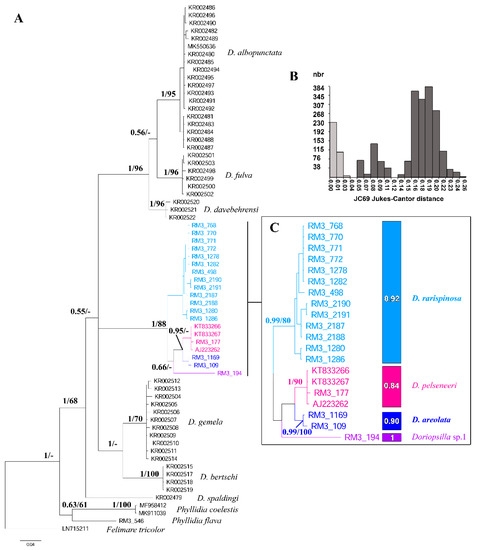