Eastern Box Turtles (Terrapene carolina) are diet generalists and as such are predicted to have diverse diets in which familiar, low-quality foods are eaten consistently at low levels, and high-quality foods are rare but eaten whenever available. Previous work showed that they feed opportunistically on seasonally available plants (shoots, leaves, flowers, and fruit), invertebrates, mushrooms, and occasionally carrion. We used fecal samples to test optimal foraging predictions relevant to diet generalists and also whether the Eastern Box Turtle diets varied seasonally in a northeastern U.S. pine-oak habitat. We found that in-depth prey species consumption patterns of six different individuals were similar to those of the sampled population overall. Leaf and stem material was consumed by 100% of the turtles in all months despite being lower-quality than other prey available. Invertebrates were consumed by at least 80% of turtles in every study period; Coleopterans were found more commonly than other invertebrates. Snails were not eaten by more than 20% of the turtles in any study period, and mushroom consumption varied from 31–75% of samples in different study periods. Monthly diet overlap was measured using both Pianka’s Index of Overlap (PIO) and the Morisita–Horn Index (MH). The PIO method indicated that the prey consumption patterns were broadly similar from June–October, while the M–H method showed that only the July vs. August comparison was highly similar. The turtle diets changed only slightly between seasons, and they conform to predictions of diet generalist models usually applied to mammals.
Keywords: diet; foraging; model; optimal; prey; seasonality; Terrapene carolina diet; foraging; model; optimal; prey; seasonality; Terrapene carolina

Eastern Box Turtles (Terrapene carolina) are terrestrial turtles that inhabit mesic woodlands in much of the eastern United States [1]. We studied Eastern Box Turtles at Brookhaven National Laboratory (BNL), near the geographic center of Long Island, (40.883° N, −72.870° W, datum = WGS84), New York. The BNL includes 2131 ha of forested habitat within the Long Island Pine Barrens (LIPB) region. The LIPB is intermediate between a humid subtropical climate and a humid continental climate [35], and is composed of pine-oak forests, containing Pitch Pine (Pinus rigida) and White Oak (Quercus alba), Scarlet Oak (Q. rubra), and Black Oak (Q. velutina). Common LIPB ground cover species that are also regular Eastern Box Turtle prey included Black Huckleberry (Gaylussacia baccata) and Lowbush Blueberry (Vaccinium angustifolium). Ground cover is sparse in some areas, while common species include Bracken Fern (Pteridium aquilinum), Wintergreen (Gaultheria procumbens), and Pennsylvania Sedge (Carex pensylvanica) [36]. Wildfires, once common, have been less common over the past 70 years due to fire suppression [37], but currently, this site is mostly fire-maintained.
All procedures were pre-approved by Hofstra University’s Animal Care and Use Committee (April 2014, Protocol 13/14–10), and Brookhaven National Laboratory’s Animal Care and Use Committee, and the New York State Department of Environmental Conservation LCP #894.
We collected multiple fecal samples from 26 adult female Eastern Box Turtles that were radio-tracked as part of a long-term movement study. We used only adult females to eliminate the possibility of between-sex differences and data were not available from enough males for meaningful between-sex analyses. The turtles were weighed, measured (straight line carapace), and individually notched before transmitters were attached to their carapaces. We located up to 20 of these turtles in the field once per month in June, July, August, and October 2014, and brought them to the laboratory to soak individually overnight in 5 cm of tap water to facilitate defecation. After 24 h, we collected the resulting fecal samples, and the turtles were released where previously located.
Fecal samples were sieved through a 0.1 mm sieve and stored at −20 °C until prey were identified and categorized. Seeds, other plant materials, and hard-bodied invertebrates were separated from other materials and examined using a dissecting microscope. Seeds were identified to genus, using guides [38,39,40,41] and museum specimens for comparison. Invertebrates were identified to Order when possible, using exoskeleton, wings, or other identifiable structures.
We compiled presence/absence data for each sample, during the four sampling periods, for each of the diet categories. Percent frequency of occurrence (PFO) was calculated for each diet category, PFO being the number of samples within a sampling period containing a specific diet item belonging in that category, divided by the number of samples. Thus, PFO provides a measure of variability in prey consumption in each of the four sampling periods.
We used two methods for measuring dietary overlap between the four sampling periods. First, we used Pianka’s Index of Overlap (PIO) to compare the proportion of each resource (prey species/category) utilized during each sampling period and to calculate a single measure of diet overlap for each pairwise comparison [42,43,44,45]. One benefit of this analysis is that it can be performed with PFO, a measure that does not include volumes or numbers of prey items. The PIO equals 1.0 when there is identical resource use (100% diet overlap), and 0.0 when there is no diet overlap. We compared the observed Pianka’s O values between sampling periods with a null model generated by randomized observed data within sampling periods, using the RA3 randomization algorithm bootstrapped 100,000 times using the EcosimR [46] package of the R open-source software environment (version 3.4.1; [47]) within the RStudio (version 1.0.153; [48]).
O values generated by these null models were used to determine whether the overlaps calculated between sampling periods were significantly different from random chance by measuring how much the likelihoods of the observed O values differed from the average simulated O value in the null model. By generating frequency distributions, the probability that the observed overlap occurred could be compared with the 100,000 possible randomized distributions [49]. This test is particularly sensitive to differences in rare prey item frequencies [50].
We similarly used the Morisita–Horn Index (M–H) to also measure the degree of overlap [45,51,52,53] between diets in different sampling periods, using the ‘mh’ function in the R package ‘divo’ of the R open-source software environment (version 3.4.1; [47] within the RStudio (version 1.0.153; [48]). The M–H test was chosen because its results are robust even with small sizes and despite the sensitivity to abundant species [54].
We also performed a Kruskal–Wallis test to compare the number of prey species found among the fecal samples from sampling period. This was done by summing the number of distinct prey items (= richness) found in each fecal sample, and comparing the samples of richness values among the sampling period.

We collected 62 fecal samples from Eastern Box Turtles during 2014, on 15 June, 15 July, 16 August, and 16 October. No individuals were sampled more than once in any 30-day period. Invertebrates were combined into a single prey category, because many fecal samples contained portions of digested and unidentifiable invertebrate species. Some Coleoptera and larval Lepidoptera could be identified using the elytra of beetles and the bristles of caterpillars. Plant material was also combined into seven categories (Figure 1), as much of this material was degraded by digestion. Monocots (grass) were separated from dicot plant material based on leaf shape and venation patterns.
Six individual Eastern Box Turtles were sampled during all of the sampling months, and their diet categories consumed appeared to vary somewhat between individuals (Figure 1). Plant material (monocot and dicot) was regularly consumed by all individuals, and the fecal samples from three individuals contained vertebrate material during at least one of the sampling periods (Figure 1).
Plant material (monocot or dicot) was found in 100% of the fecal samples, while dicot plant material alone was the next most frequent of all prey items (Table 1). Dicot leaves and stems were found in a high percentage of fecal samples in June, July, August, and October (86.67%, 100%, 100%, and 100%, respectively, 96.77% overall). Seeds were relatively abundant in samples collected in July, with the highest species diversity of seeds found in samples collected in August (Table 1). Seeds from the Vaccinium spp. were found in fecal samples during all months sampled, although these fruits typically ripen in July. Vertebrate prey remains (bone, hair, or feathers) were found in many more of the fecal samples in June (40% of samples) than in October (6%) (Table 1). Two out of nine fecal samples containing hair also contained bone, while one of the two samples containing feathers also contained bone.
The analysis of Eastern Box Turtle diet overlap using Pianka’s O indicated that all pairwise comparisons were more similar than expected by random chance (Table 2). June and July (O = 0.87, p < 0.01), June and August (O = 0.81, p = 0.02), June and October (O = 0.83, p = 0.01), July and August (O = 0.89, p < 0.01), July and October (O = 0.76, p = 0.02), and August and October (O = 0.99, p < 0.01) had O values higher than would have been expected based on comparison with the null models (Table 2).
Our analysis of Eastern Box Turtle diet overlap using the Morisita–Horn Index indicated that June and August (ʎ = 0.79, 95% CI = 0.77–0.79) was the only pairwise comparison that was more similar than expected by random chance. The comparison between July and August resulted in an overlap that was nearly significant with an overlap of 0.84, and an upper 95% Confidence Interval of 0.80. The comparisons between June vs. July, June vs. October, July vs. October, and August vs. October did not yield any significant patterns (either more similar or more different than random) (Table 2).
There was a significant difference in the number of prey items found in fecal samples collected during different months (Table 3). The Kruskal–Wallace test showed that the number of prey items in a fecal sample was significantly affected by the month sampled (H = 21.03, d.f. = 3, p < 0.0001). Analyses using Conover post hoc tests for significance indicated that the average number of diet items per individual was significantly lower in June than in August (p = 0.0153), October vs. July (p = 0.0003), and October vs. August (p < 0.0001). All other comparisons found no significant differences (June vs. July p = 0.0601, June vs. October p = 0.1590, July vs. August p = 0.5527).

This research was supported by a Donald Axinn Fellowship in Ecology and Conservation awarded to M.P.F., and a Hofstra University Faculty Research and Development Grant awarded to R.L.B.

We are grateful to Lisa Filippi, Eric Rulison, Robert Seagull, and Seth Wollney for their assistance with prey species identification, and Michael Roswell, Kent Hatch, and Steven Raciti for assistance with the analysis and preparation of the manuscript. 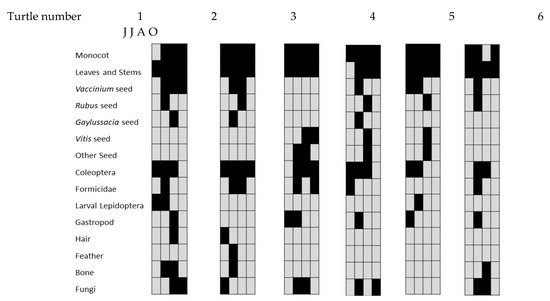