How Does Circadian Rhythm Shape Host-Parasite Associations? A Comparative Study on Infection Patterns in Diurnal and Nocturnal Raptors
Previous Article in Journal

Black Coral Distribution in the Italian Seas: A Review

Inferring phylogeographic patterns of macroalgal species is essential for understanding the population structure and for the conservation of macroalgal species. In this study, the phylogeographic patterns of two co-distributed macroalgal species along the coast of Korea and Japan, Pachymeniopsis lanceolata and Pachymeniopsis elliptica, were analyzed. Pachymeniopsis lanceolata (215 specimens from 36 sites) and P. elliptica (138 specimens from 24 sites), using the plastid rbcL gene, are characterized by fifteen and six haplotypes, respectively. Mitochondrial COI-5P gene sequences revealed a low variation for both species. An analysis of molecular variance (AMOVA), pairwise FST comparisons, and haplotype networks based on the rbcL data suggest a weak genetic differentiation of both species. The shared haplotypes (P. lanceolata: LR01; P. elliptica: ER01) found in the entire sampling range indicate that these two Pachymeniopsis species can disperse over long distances along the coast of Korea and Japan. Despite the similar phylogeographic pattern, our results suggest that P. lanceolata has a higher genetic diversity, with a wider distribution along the Korean Peninsula than P. elliptica. Moreover, it is adapted to low sea surface temperatures and survived in more of the available habitats during periods of climatic change, whereas P. elliptica is less adaptable and more susceptible to environmental disturbance. This phylogeographic study provides a rationale for the conservation of the wild Pachymeniopsis population. View Full-Text
Keywords: genetic diversity; haplotype network; Pachymeniopsis; phylogeography; macroalgae; Northwest Pacific genetic diversity; haplotype network; Pachymeniopsis; phylogeography; macroalgae; Northwest Pacific
►▼ Show Figures 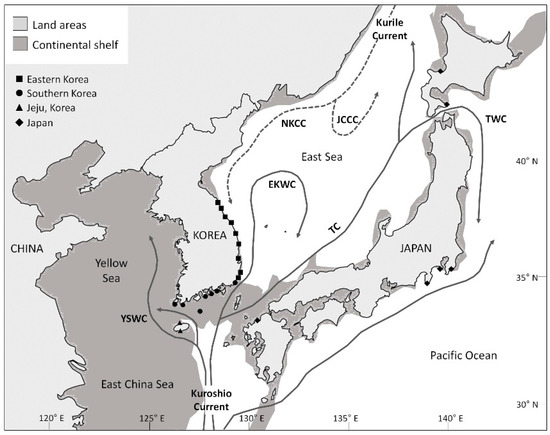