How Do Young Community and Citizen Science Volunteers Support Scientific Research on Biodiversity? The Case of iNaturalist
Previous Article in Journal

Codonopsis tangshen (C. tangshen), an important medicinal plant, is highly valued in traditional Chinese medicine. It functions in strengthening organic immunity, dilating blood vessels, helping depressurization, improving microcirculation, and enhancing hematopoiesis [1]. This plant is applicable for treating anorexia, spleen deficiency, hyperirritability, palpitation, and lassitude ailments [2]. According to phytochemical analysis, C. tangshen contains lobetyolin, sterol, polysaccharides, phenylpropanoids, and saponin, besides other chemical compounds [3]. In China, C. tangshen could be a low-cost succedaneum for Panax ginseng, and dry roots of C. tangshen have been widely used as a tonic [4]. However, due to increasing disease pressure, continuous cropping of C. tangshen in the same plot of land leads to a significant decline in the yield and quality of the tubers also known as soil sickness, or continuous cropping obstacle problem [5]. Therefore, the factors leading to problems associated with continuous cropping of C. tangshen have become a research priority in China.
Many factors, such as the imbalance of soil nutrients, build-up of pests in the soil, disorder in physico-chemical soil properties, and shifts in microbial community, have been reported to cause the decline in crop yield and quality in continuous cropping regime [6]; autotoxicity of root exudates is considered as one of the main causes [7]. It is not only observed in consecutively cropped C. tangshen, but also in many other crops, and horticultural and medicinal plants. Terpenoids, phenolics, alkaloids, cyanogenicglycosides, and steroids are reported to be closely related to autotoxicity [8]. Previous studies have frequently used filter paper bioassays enriched with a single chemical to assess the allelopathic and ecological effects of root exudates in soil; however, they were considered inadequate and controversial as they excluded the effects of microbial communities and soil chemical properties [9]. In addition, many other studies showed that the autotoxicity of root exudates could shape the rhizosphere microbiology by attracting or deterring specific microbial species [10,11]. Therefore, the shifts in rhizosphere microbial community, under continuous cropping, have recently attracted considerable attention [12].
As is well-known, function of soil ecosystem is mainly governed by rhizosphere microbial and bulk microbial dynamics. Microbial composition and diversity affect humus formation and degradation, soil structure and biological interactions and geochemical cycles [7,13]. Root-related microbial communities influence many biochemical processes in the soil, thereby contributing to plant fitness. Autotoxicity of root exudates, and microbes affected by the rhizosphere secretions are harmful to plant health [14,15]. In addition, many studies reported that the continuous cropping problems of plants resulted from shifts in the soil microbial community induced by root exudates rather than direct allelopathic autotoxicity [16,17,18]. Increasing studies have shown that root exudates could select microorganisms in the rhizosphere, and that these plant-associated microorganisms could then influence plant growth and health [10]. Wu et al. found that consecutive monoculture of Pseudostellaria heterophylla can alter the fungal community in the soil, leading to an increase in pathogenic fungi [16]. Fusarium oxysporum, an important plant disease pathogen, increased with the increasing years of continuous cropping of Pseudostellaria heterophylla [5]. However, responses of the rhizosphere bacterial community (and their functional significance) to continuous cropping of C. tangshen have not yet been fully elucidated.
Next-generation sequencing technology generates a large number of DNA reads, as in 454 pyrosequencing, and has proven to be a suitable method for accurate microbial community analysis. Here, 454 pyrosequencing of the 16S rRNA gene was employed to gain a deeper insight into the biodiversity of bacterial communities [19]. Therefore, this study was conducted to evaluate how the abundance and composition of soil bacterial community change with continuous cropping using 454 pyrosequencing. Moreover, we aimed to explore whether soil properties had any effect on the bacterial community structure.

C. tangshen Oliv. cultivar ‘Banqiao’ (main varieties in the main production region) was used as the test material. The experiment was conducted at Enshi City, Hubei Province (30°26′ N, 109°23′ E), which has a humid subtropical climate, annual mean temperature of 16.2 °C, and annual mean precipitation of 1600 mm. The experiment included two regimes, main cropping (FLZ) and continuous cropping (LZ) of C. tangshen. For LZ regime, a field previously cultivated with maize for 7 years, and followed by 3 years of C. tangshen was selected, with the adjacent field previously cultivated with maize for 10 years being used as a control (FLZ). C. tangshen Oliv. was planted on 26 March 2014, and harvested by 19 September 2016. The rhizosphere soil samples of C. tangshen Oliv. at a depth of 0–30 cm were collected from both LZ and FLZ regimes on 4 May (named LZ1 and FLZ1), 14 July (named LZ2 and FLZ2), and 19 September (named LZ3 and FLZ3), 2016. Three plots (1 × 1 m) are set up for each treatment, and 20 C. tangshen Oliv. plants are collected by the five-point sampling method in each plot, and the rhizosphere soils of 20 C. tangshen Oliv. plants are mixed into one replicate (Supplementary Figure S1). The rhizosphere soils of C. tangshen Oliv. were collected by shaking the roots and were separated into two parts. In detail, use a shovel to dig up the roots of C. tangshen Oliv. and remove large pieces of surface soil. Gently shake the root system three times, the fallen soil is non-rhizosphere soil, and the soil still sticking to the roots is rhizosphere soil. The rhizosphere soils were collected with a brush in a sterile self-sealing plastic bag and homogenized by being passed through a 2 mm sieve. One part was brought back to the laboratory within 10 h and stored at −80 °C until further processing for the experiments. The other part was air-dried at room temperature for two weeks for the determination of the physical and chemical properties of the soil. All treatments were carried out at the same site, to maintain consistency in soil and climatic conditions; the same fertilization and field management was carried out during the entire trial. Each treatment had three repeated plots, and the study area was completely random.

Harvesting was performed in late September 2016. Plants from all plots were collected; fresh weight of each root was measured after each collection. The fresh roots were oven-dried at 45 °C for 96 h, and then constant weight, before measuring the lobetyolin content. Lobetyolin content was determined by an HPLC method [20].

Based on the unique barcode, the sequence reads were assigned to each sample and the low quality sequence were removed. Paired-end reads were merged using FLASH (V1.2.7) [23]. After quality filtering and chimera removal, the high-quality clean tags were used to perform OTU cluster and species annotation by UPARSE software (UPARSE v7.0.1001). Sequences with ≥97% similarity were assigned to the same OTU. Species annotation was carried out using the UNITE database (http://www.arb-silva.de/ (accessed on 1 January 2021)) [22], based on Blast algorithm, calculated by QIIME software (Version 1.7.0).

The alpha diversity, performed based on OTU normalized data, was applied to analyze the complexity of species diversity in a sample using five indices, namely, observed species, diversity indices (Shannon’s, Simpson’s) and community richness indices (chao1, ACE). Beta diversity analysis was used to evaluate differences in species complexity between samples. Correlations between the OTU data and soil chemical properties were determined by redundancy analysis (RDA), which was carried out via the vegan package of R.
One-way analysis of variance followed by Tukey’s test (p < 0.05) was used for multiple comparisons using SPSS 20.0. To assess the relative contribution (%) of each microbial taxon to the dissimilarity across samples, similarity percentage analysis (SIMPER) was performed with the PRIMER V5 software package (PRIMER-E Ltd., Plymouth, UK) [23].

The results of principal coordinate analysis (PCoA) and hierarchical cluster analysis (HCA) showed that there were significant differences in bacterial community structure between different treatments, and similar patterns for similar treatments (Figure 3). PCoA analysis revealed a separation between the soil samples from continuous cropping and main cropping by the first dimension, which represented about 68.94% of the total variance (Figure 3A). Simultaneously, HCA was applied, and it was convenient to find that all samples grouped into two major clusters corresponding to the two different regimes (continuous cropping and main cropping) (Figure 3B). Three subgroups corresponding to sampling time could be distinctly identified in the two major clusters.
A heat map analysis of the top 50 most abundant genera in six different treatments was performed at the genus level, (Figure 4). The color gradient reflects the high and low abundances of bacterial community structure across the samples. It showed that main cropping soil formed different communities than continuous cropping soil, regardless of the sampling time.

Data is contained within the article and supplementary material. 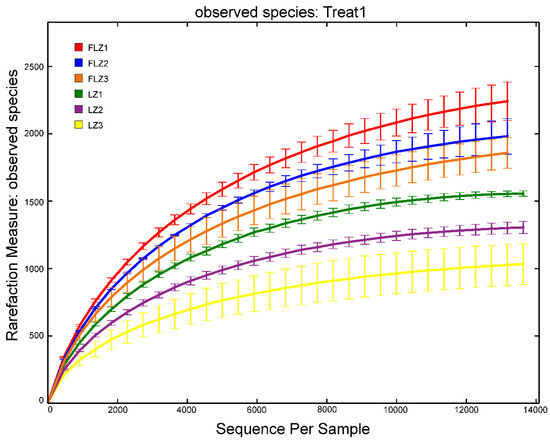 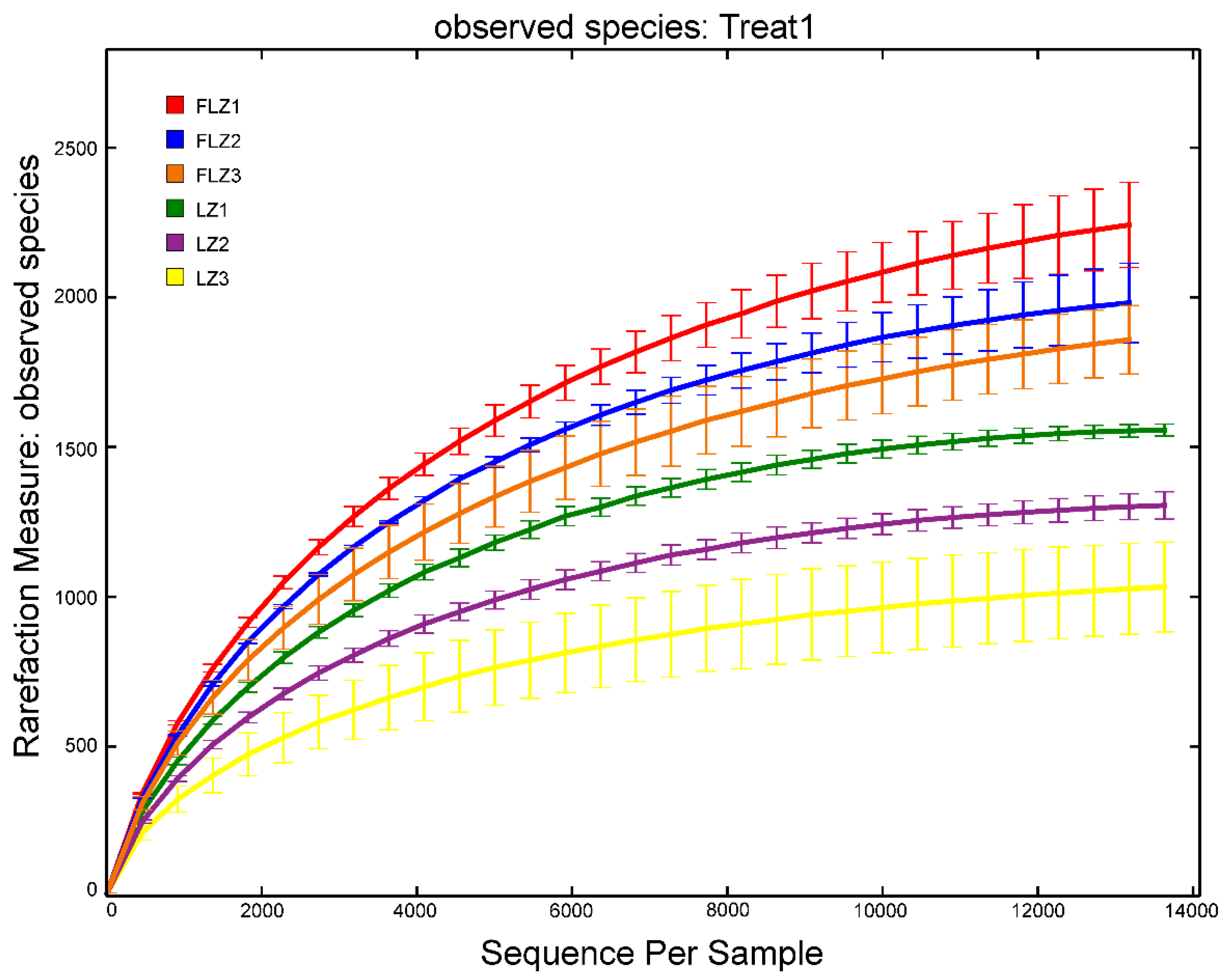 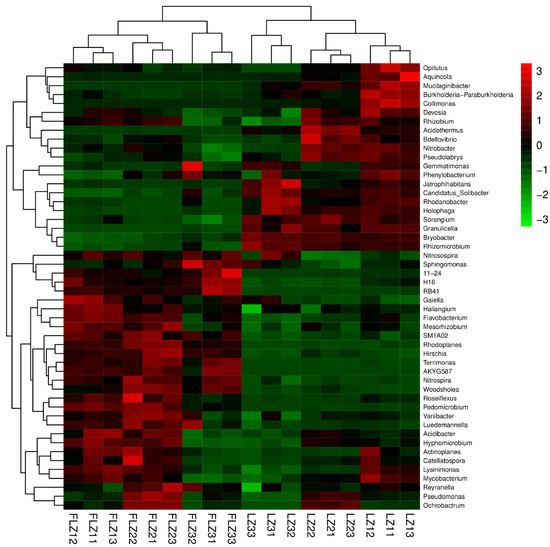 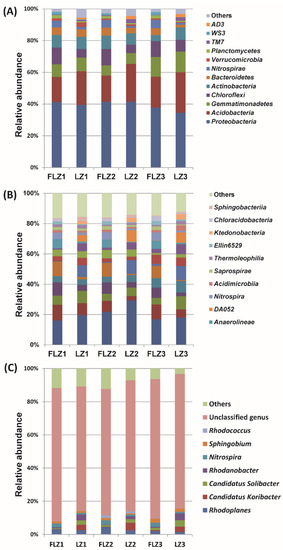 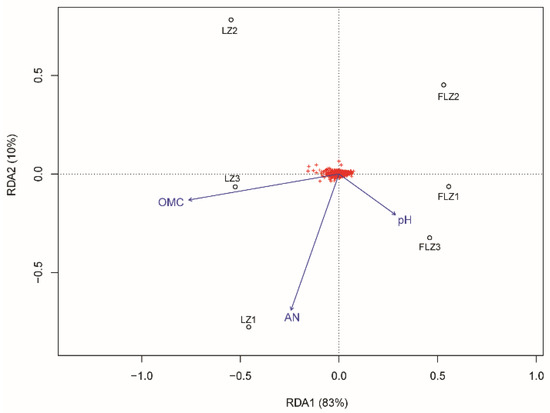 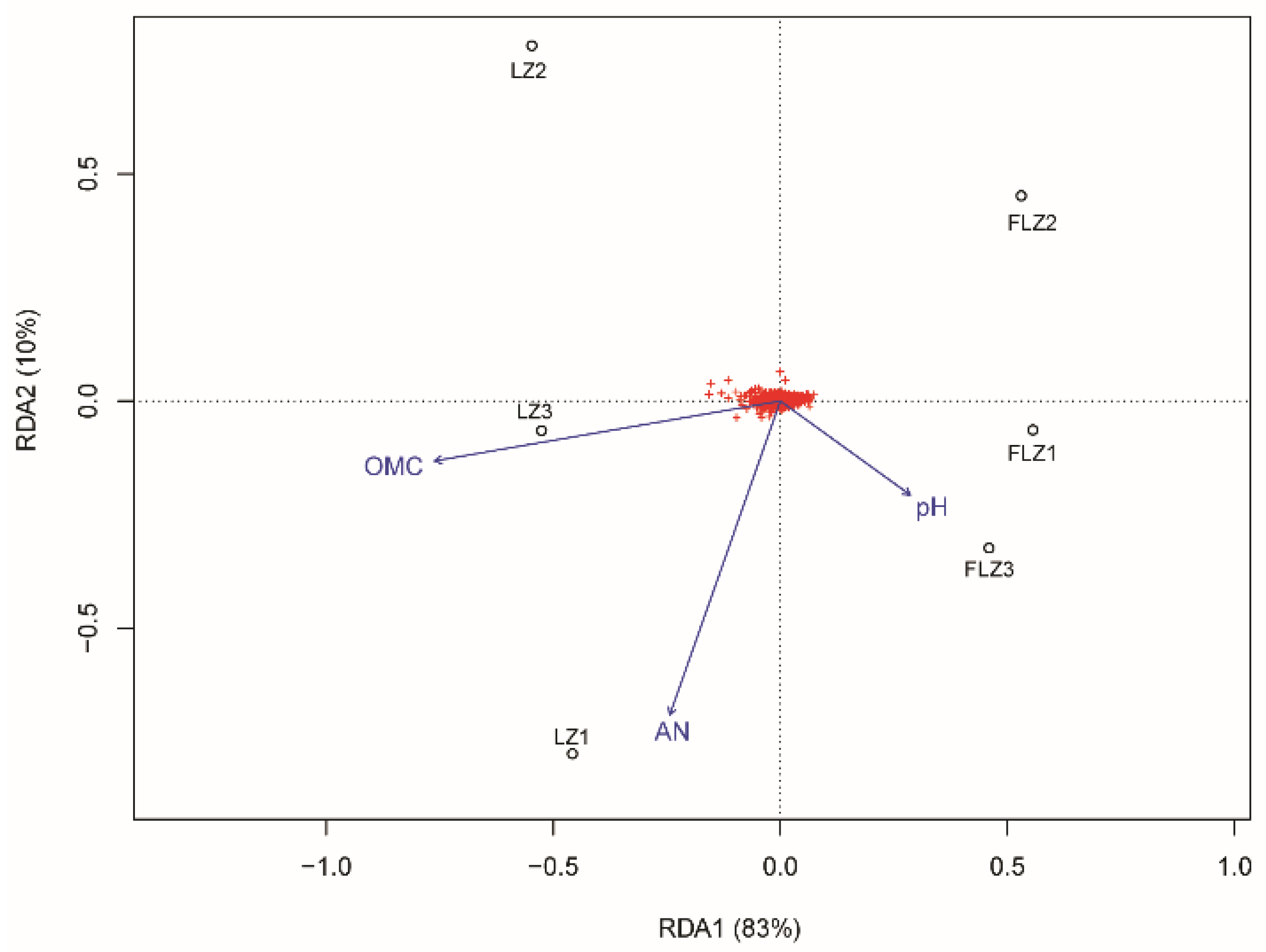