Reappraisal on the Phylogenetic Relationships of the Enigmatic Flightless Bird (Brontornis burmeisteri) Moreno and Mercerat, 1891
Previous Article in Journal

Predation and Scavenging in the City: A Review of Spatio-Temporal Trends in Research

A Giant Ostrich from the Lower Pleistocene Nihewan Formation of North China, with a Review of the Fossil Ostriches of China

A large incomplete ostrich femur from the Lower Pleistocene of North China, kept at the Muséum National d’Histoire Naturelle (Paris), is described. It was found by Father Emile Licent in 1925 in the Nihewan Formation (dated at about 1.8 Ma) of Hebei Province. On the basis of the minimum circumference of the shaft, a mass of 300 kg, twice that of a modern ostrich, was obtained. The bone is remarkably robust, more so than the femur of the more recent, Late Pleistocene, Struthio anderssoni from China, and resembles in that regard Pachystruthio Kretzoi, 1954, a genus known from the Lower Pleistocene of Hungary, Georgia and the Crimea, to which the Nihewan specimen is referred, as Pachystruthio indet. This find testifies to the wide geographical distribution of very massive ostriches in the Early Pleistocene of Eurasia. The giant ostrich from Nihewan was contemporaneous with the early hominins who inhabited that region in the Early Pleistocene. View Full-Text
Keywords: ostrich; China; Nihewan; Pleistocene; femur ostrich; China; Nihewan; Pleistocene; femur
►▼ Show Figures 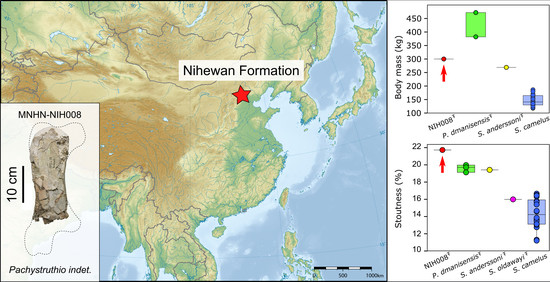