The Role of Carrion in the Landscapes of Fear and Disgust: A Review and Prospects

This review addresses the state of the art of the systematics and the improvements in the biology, ecology and species diversity of the two annelid taxa Parergodrilidae and Orbiniidae, the early branching group of Orbiniida sensu Struck et al., 2015 according to molecular studies. An effort to identify gaps of knowledge is given to understand the distribution, dispersal and the diversity Parergodrilidae and Orbiniidae hold, as well as to give several directions for future research. Parergodrilidae is a taxon of interstitial annelids constituted by the terrestrial Parergodrilus heideri (monotypic genus up to date), reported throughout Europe but also in Korea and North America, and the genus Stygocapitella, which includes eleven species from the upper shore of sandy beaches distributed along Europe and other regions of the world. Orbiniidae contains more than 200 described species spread over 20 valid genera, varying in size from a few millimeters up to 30 cm, distributed globally and living in a wide variety of soft bottoms. Improving the knowledge on these two sister-taxa is crucial for the understanding of the evolution to interstitial forms by progenesis in Annelida. View Full-Text
Keywords: biodiversity; biology; distribution; diversity; ecology; phylogeny; taxonomy biodiversity; biology; distribution; diversity; ecology; phylogeny; taxonomy
►▼ Show Figures 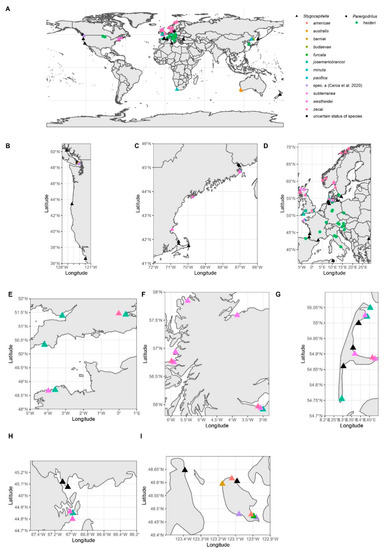