Glacial relicts, especially those with very narrow habitat requirements, are particularly affected by global warming. We considered Papaver occidentale, a glacial relict endemic to the Western Prealps, belonging to the alpine poppy complex (P. alpinum aggr.), as a model taxon to study the actual status and potential future distribution of species restricted to particular microrefugia. For this study, all known localities were visited, each population was georeferenced and the number of individuals was estimated. Species Distribution Modelling (SDM) was used to evaluate the present and future potential distribution range and habitat suitability, taking into account the specificity of its habitat (calcareous screes). According to our study, there are globally 19 natural populations of P. occidentale, and a total of about 30,000 individuals. The taxon is a highly specialized alpine plant growing in the majority of natural sites between 1900 and 2100 m a.s.l. on north-facing screes. Predictions for the end of the 21st century indicate that a suitable area will significantly decrease (0–30% remaining). Under the most severe climatic scenarios (RCP 8.5), the species risks complete extinction. The long-term in situ conservation of P. occidentale, and all other taxa of the P. alpinum complex, is unlikely to be achieved without slowing global climate change. More generally, our fine-scale study shows that local environmental buffering of large-scale climate change in high-mountain flora may be very limited in specialised taxa of patchy environments such as screes. View Full-Text
Keywords: arctic-alpine flora; climate change; extinction risk; microrefugia; narrow endemism; Papaver alpinum aggr.; screes; species distribution modelling arctic-alpine flora; climate change; extinction risk; microrefugia; narrow endemism; Papaver alpinum aggr.; screes; species distribution modelling
►▼ Show Figures 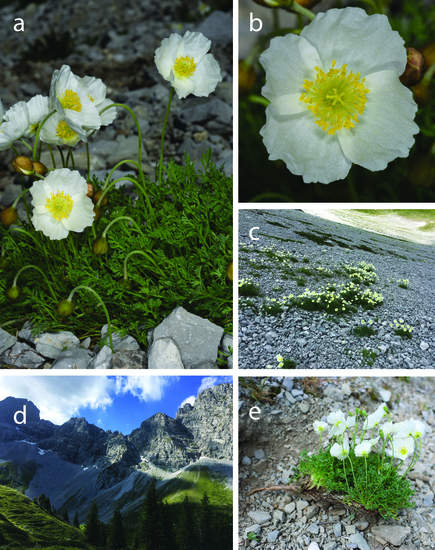