Facilitation or Competition? Effects of Lions on Brown Hyaenas and Leopards

Eukaryotic Communities in Bromeliad Phytotelmata: How Do They Respond to Altitudinal Differences?

Bromeliad phytotelmata are habitats for different organisms and models for ecological studies. Although poorly known, these environments are widely distributed in tropical ecosystems, harboring cosmopolitan and endemic species. Here, we investigated the diversity of the eukaryotic community in bromeliad phytotelmata considering the influence of altitude. We randomly sampled three bromeliad individuals (twice per season over one year) at four altitudinal strata (20 m, 400 m, 910 m, and 915 m) through a mountain range in southern Brazil. Species richness of phytotelmata community was higher at intermediate altitude while community-wide multivariate analyses revealed differences in phytotelmata communities at each height. Winter was the season with highest community richness, but a peak in summer was observed. Diversity partitioning in different spatial components showed that gamma diversity decreased linearly with altitude, whereas alpha diversity peaked at intermediate altitudes, and beta diversity decreased with height. The relative importance of the components of beta diversity showed different patterns according to the altitude: turnover was more important at intermediate and lower levels, while higher altitude communities were more nested. Our results indicate that differences in height affect diversity patterns of bromeliad phytotelmata communities, which were more diverse at lower altitudes in comparison with more homogeneous communities at higher levels.
Keywords: eukaryotic assemblage; metabarcoding; ciliates; bromeliads eukaryotic assemblage; metabarcoding; ciliates; bromeliads

Bromeliads (Bromeliaceae) are one of the most representative groups of plants in the Neotropical region, with a great taxonomic, ecological, and morphological diversity [1]. Brazil is the Neotropical country with the highest degree of diversity and endemism of this family [2]. These plants are key players in enhancing the biological diversity in the neotropics, as their structural complexity provides habitat for terrestrial, semi-aquatic, and aquatic fauna [3]. Their leaves are arranged in rosettes, and in their bases, the accumulation of water and organic matter, promotes an environment for several organisms [4], emphasizing the importance of these plants in the expansion of biological diversity [5]. Bromeliad phytotelmata can accumulate up to 50 L of suspended water per hectare, being important freshwater habitats, and contributing to the nutrient cycling [6,7].
The aquatic community inhabiting bromeliads phytotelmata are very diverse, from bacteria and small protozoa, microcrustaceans, and oligochaetes, to insect larvae and tadpoles of anurans [8,9,10,11]. The phytotelmata colonization process seems to be complex, involving a series of interconnected events, such as active and passive dispersion, arrival, and the process of establishment of the organism [12]. Frank and Lounibos [13] compared this process of colonization with islands, dividing the organisms into phytotelm-specialists (highly selective colonization) and non-specialists (random colonization). The phytotelm communities are exposed to stressful environmental conditions, such as nutrient restriction and water deficit during drought periods. These factors lead to the development of survival mechanisms for long-term community maintenance. The environment formed by the bromeliad leaves can be complex and end up providing a variety of compartments and ecological gradients [14]. This microenvironment not only benefits the community of aquatic organisms and bromeliad, but also provides shelter, protection, and sources of water and food for birds and mammals. In this way, phytotelmata in bromeliads expands the availability of resources and habitats in the ecosystems they are inserted [15]. The majority of studies on aquatic invertebrates in bromeliads have focused on cataloguing species not previously known in phytotelmata [1]. However, some ecological studies have contributed to the understanding of this habitat, e.g., [16,17,18].
Mountain ranges provide interesting environments and natural experiments for studying how the diversity of organisms varies according to altitude [19]. Although the inverse relationship between altitude and species diversity has been accepted as a general pattern for some time, e.g., [20], there is also evidence that diversity can be higher at intermediate elevation levels. The decreasing area and isolation of mountaintops, as well as the low rates of colonization and the high rates of extinction, may be responsible for the decrease in diversity at higher elevations, and the consequent diversity peak at intermediate elevations [21]. In tropical humid mountains, species richness generally decreases with increasing altitude, with the main factors involving: habitat reduction, atmospheric pressure, air temperature, and increased solar radiation [22,23,24]. Phytotelmata have been models for taxonomic and ecological studies due to the high diversity found in these small ecosystems, and because the abundance of plant-held water in nature [3]. Although these patterns are noticeable for many groups, few studies investigate altitudinal differences in bromeliad phytotelmata communities [1,14]. In these studies, there was a tendency of decreasing abundance with increasing altitude, with a peak of specific richness observed at intermediate levels. Rahbek [25] has suggested this pattern of a peak of species richness at intermediate altitudes, where he analyzed that not all species presents a monotonic decline with altitude.
Studies investigating altitudinal differences in phytotelm communities generally use species richness and abundance analysis to verify patterns and significant differences. Few studies have explored the different components of spatial diversity in phytotelm communities, and even fewer explored their response to altitudinal gradients. Jocque and Field [1] found correlations between the turnover component of beta diversity with altitude, meaning that elevational gradients increase the substitution of species between communities. Other studies, like Richardson et al. [26], verified the influence of post-hurricane disturbances for two decades on phytotelmata communities, resulting in decline of alpha and gamma diversities due to the loss of bromeliad individuals, as well as an increase in rare species in the community composition. Busse et al. [27] used beta diversity to verify changes in community structure over a canopy gradient, and nestedness values demonstrated that communities in phytotelmata more exposed to sunlight were subsets of a more diverse community present in forested areas.
The aim of this study was to investigate how phytotelmata community diversity responds to an elevational range in southern Brazil, using ciliates, arthropods, and rotifers as community descriptors. We hypothesized that (i) different altitudes would present discrete community compositions; (ii) community diversity for all spatial levels would decrease as altitude increases; and (iii) the turnover component of beta diversity (i.e., substitution of species between communities) would increase with altitude.

A total of 45 morphospecies distributed among six taxonomic groups were found at different sampled altitudes. The most representative phyla were: Ciliophora, Arthropod, Rotifera, Annelida, Platyhelminthes, and Nematoda. The list of morphospecies found in the tanks of Vriesea spp. at different altitudes is shown in Table S1, in Supplementary Material. A total of 35 morphospecies were found in phytotelmata at intermediate altitude, followed by 32 at lower altitude. At higher altitudes (910 m and 915 m), 28, and 30 morphospecies were observed, respectively. Ciliophora was the phylum with the highest number of morphospecies (24), where the majority were hymenostome ciliates (Lambornella trichoglossa, Tetrahymena sp. and Glaucoma sp.), followed by Euplotes sp., and Halteria grandinella. Peritrich ciliates (Rhabdostyla, Vorticella, and Lagenophrys) were also present in the samples, attached to other invertebrates and to organic matter. Rotifer morphospecies found in phytotelmata communities belong to Philodinidae family (bdelloids), with different body shapes and swimming modes. Crustaceans, insects, and hydracharinids composed the Arthropoda community. Harpacticoid copepods (Atheyella fuhrmani) and the ostracod genus Elphidium were present at all altitudes sampled. Insects were characterized by mosquito and beetle larvae, belonging to Chironomidae, Culicidae, Thaumaleidae, Ceratopogonidae and Psychodidae (Diptera families), and Scirtidae (Coleoptera). The genus Dero and an unidentified group represented Oligochaeta morphospecies (2). Two morphospecies of flatworms were found in all samples. Nematodes, although very abundant in quantitative samples, were rarely observed in live samples, probably due to damage resulting from sampling.
Overall community species richness was higher at 400 m elevation. However, variation of richness within each of the three most important groups was high and did not follow a common pattern. We found a seasonal variation in species richness considering mean values for each season, with highest values found in autumn and winter samples. Seasonal variation within each altitudinal stratum was high for most altitudes and organisms (Figure 2, Table 2).
The Constrained Correspondence Analysis revealed different community compositions for the lower, intermediate, and higher altitudes. Plots from the higher altitudes (910–915 m) were mostly overlapped (Figure 3). The ordination pattern was corroborated by a multivariate analysis of variance, which resulted in compositions of different communities considering the altitude factor (MANOVA; R2 = 0.2454 m F = 4.7714, p = 0.001). Pairwise comparisons between altitudes resulted in significant differences in all pairs (p < 0.01), with the exception of 910–915 m (p = 0.252). In addition, the analysis of indicator species resulted in at least one indicator per altitude (Table 3; also plotted in Figure 3).
The diversity profiles calculated with Hill numbers revealed different patterns for different spatial components of diversity. Considering the gamma level (altitude), diversity decreased as altitude increased (Figure 4A). However, this pattern was not recovered considering the alpha (cistern) level, which showed the diversity peak at intermediate altitudes, with overlapping profiles for the remaining altitudes (Figure 4B). Beta diversity, similarly to the pattern shown for gamma, decreased as altitude increased. In addition, the contribution of the different components of beta diversity varied according to the altitude level: turnover was more important in lower and intermediate altitudes, whereas nestedness was more important in higher altitudes (Table 4).

Our results bring novel empirical evidence that phytotelmata community structure and composition respond to altitudinal gradients. Interpreting diversity responses to altitudinal differences seems to be complex. Considering bromeliad phytotelmata as ecosystems, the altitudinal gradient can affect differently each studied group. In a broader view, our analysis demonstrated that altitude-increasing act as species filter, where foothills and lower levels present more species substitution and higher diversity, while mountaintops harbor more homogeneous and nested communities. Although response patterns to altitude variations have been unknown for many organisms and ecosystems, we bring evidence to the bulk of this theory using bromeliad phytotelmata communities as descriptors, a system that is as ubiquitous in tropical systems as it is poorly studied. Further studies on the responses of these systems to altitudinal and other spatial gradients should include other dimensions of biodiversity, such as functional and phylogenetic approaches, as well as potential abiotic drivers, to access in-depth processes related to the assembly of these communities.

The following are available online at https://www.mdpi.com/1424-2818/12/9/326/s1, Table S1: List of morphospecies found in the phytotelmata of Vriesea gigantean, Vriesea incurvata, Vriesea platynema, and Vriesea friburgensis during the study period.

This research received no external fund.

We would like to thank RPPN Pró-Mata/PUCRS and Daniel (Águas do Garapiá) for allowing access to their proprieties for our research. E.M. was supported by a fellowship granted by CNPq (Conselho Nacional de Desenvolvimento Cientifico e Tecnologico). 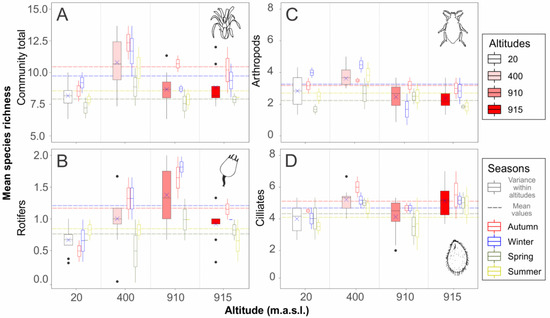 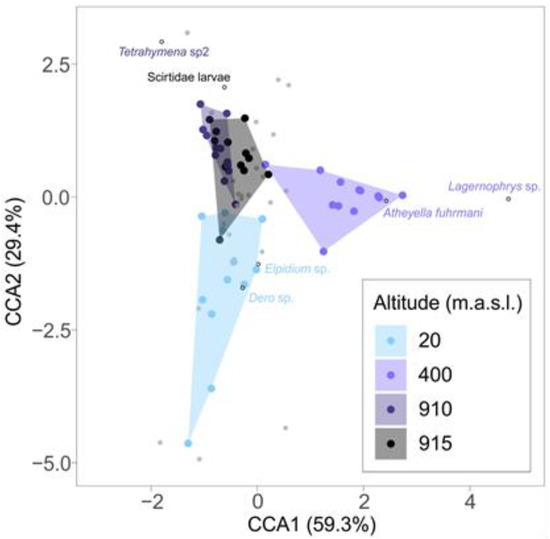