The Extraordinary Importance of Coral-Associated Fauna
Previous Article in Journal

Zoantharia (Cnidaria: Hexacorallia) of the Dutch Caribbean and One New Species of Parazoanthus

Widespread Occurrence of a Rarely Known Association between the Hydrocorals Stylaster roseus and Millepora alcicornis at Bonaire, Southern Caribbean

:
Among symbiotic associations, cases of pseudo-auto-epizoism, in which a species uses a resembling but not directly related species as substrate, are poorly documented in coral reef ecosystems. In the present study, we assessed the distribution of an association between the hydrocorals Stylaster roseus and Millepora alcicornis on about 50% of coral reef sites studied in Bonaire, southern Caribbean. Although previously thought to be uncommon, associations between the lace coral S. roseus and the fire coral M. alcicornis were observed at both the windward and leeward sides of Bonaire, mainly between 15 and 25 m depth, reaching a maximum occupation of 47 S. roseus colonies on a single M. alcicornis colony. Both species’ tissues did not show any signs of injuries, while an in-depth inspection of the contact points of their skeletons revealed that both partners can partially overgrow each other. How it is possible that S. roseus is able to settle on the stinging tissue of Millepora as well as how, by contrast, the latter may facilitate the lace coral by offering a certain degree of protection are questions that deserve further investigations.
Keywords:
Caribbean Netherlands; fire corals; Hydrozoa; pseudo-auto-epizoism; stony corals; substrate; symbiosis 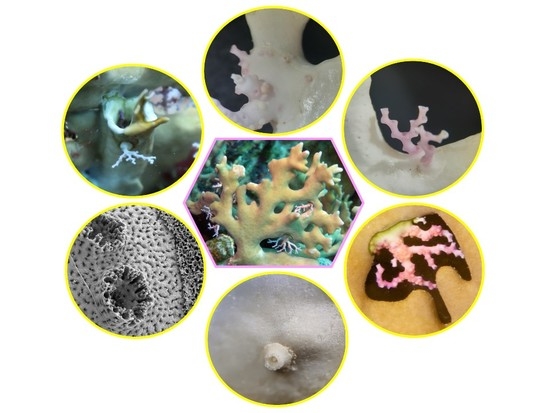 As one of the most species-rich marine ecosystems, coral reefs are renowned for their plethora of different interspecific associations [1]. Reef-building corals serve as home for diverse assemblages of macro- and micro-organisms from all kingdoms of life [2], which rely on them for food, shelter and substrate [3,4,5].
To date, reef-building corals belonging to the order Scleractinia account for the majority of host species studied [3], although other hosts of other benthic groups exist, such us anthozoans, bryozoans, sponges, ascidians and hydrocorals.
Regarding hydrocorals (Class Hydrozoa), the genus Millepora Linnaeus, 1758 (Suborder Capitata) occurs as a circumtropical component of shallow-water coral reefs [6,7,8,9,10,11]. Milleporids are found in depths of less than 1 m to about 40 m and provide substratum for sedentary organisms and food or shelter for mobile ones [12,13,14,15,16]. The three-dimensional structural complexity of the colonies generated by in particular branching Millepora species harbors a great diversity of organisms that includes crustaceans, worms, fishes and other organisms that live in close association [12,13,14].
Similar to Millepora, hydrocorals belonging to the family Stylasteridae (Suborder Filifera), commonly known as “lace corals”, are colonial hydroids characterized by a calcium carbonate skeleton, with 90% of the species occurring at depths over 50 m [17]. Their colonies are generally erect and branching with only the Pacific genus Stylantheca Fisher, 1931 having an encrusting morphology [18]. Most lace corals, including those of the genus Stylaster Gray, 1831, are known to form strict relationships with other invertebrates [18,19]. Stylasterids are host of a number of commensals such as polychaetes [20,21,22], nemerteans, pycnogonids, cirripids, barnacles, and bryozoans [23,24]. In addition to these, six species of gall living siphonostomatoid copepods of the family Asterocheridae [25,26] and tiny ovulid gastropods of the genus Pedicularia Swainson, 1840 are known to be obligate symbionts on various stylasterid species [27,28].
Among interspecific relationships involving hydrozoans, a minority includes a hydrozoan-hydrozoan association that has been classified as auto-epizoism, even though the two partners do not belong to the same species [29,30]. Indeed, several hydroids are known to live epizootically on other hydroids, usually using the other as a solid substratum, e.g., members of the genera Hebella Allman, 1888 and Anthohebella Boero, Bouillon & Kubota 1997 can be observed on the perisarc of other hydroid species [31,32].
Currently no information is present about a possible association between Stylaster and Millepora, although two earlier observations have been reported from the southern and eastern Caribbean [33,34]. Here we investigated the distribution and abundance of the association between Stylaster roseus (Pallas, 1766) and Millepora alcicornis Linnaeus, 1758 found during a biodiversity expedition conducted at Bonaire, in the Dutch Caribbean. In addition, an in-depth morphological analysis of the skeleton interactions between both partners is provided.

The study was conducted in the waters of Bonaire from October to November 2019. We explored 34 localities, chosen randomly among accessible sites (Figure 1; Table S1). The presence of the Stylaster-Millepora association was recorded by applying the roving diving technique with scuba, in which a 1-h dive served as the sampling unit, by starting at the maximum depth at each dive locality (15–35 m) and moving to shallower water from there [35]. Even though the information collected from this timed dive method does not result in quantitative data per site, it is particularly useful when the goal of the study is to compare biodiversity among site via finding as many species as possible, or when looking for small and/or cryptic species and symbiotic associations [36]. Moreover, to preliminarily assess the abundance and spatial distribution of this association, the total number of Stylaster-Millepora associations and their depth ranges were recorded for each site. In addition, the total numbers of colonies of S. roseus found to grow on each M. alcicornis colony were noted. For documentation purposes underwater photographs of the Stylaster-Millepora association were taken using a Canon GX7 Mark II camera in a Fantasea GX7 II underwater housing and a Nikon D7100 in a Hugyfot housing. A branch fragment of about 10 cm in length of M. alcicornis colonized by S. roseus was collected for further analyses. Microphotographs (×32) of stylasterids growing on the coral skeletons of M. alcicornis were taken using a Leica EZ4 D stereo microscope equipped with a Canon GX7 Mark II camera. Several parts of the fragment were observed using the Zeiss Gemini SEM500 scanning electron microscope operating at beam energies of 5 kV (ZEISS, Oberkochen, Germany) in order to characterize the skeletal interface/interactions of the association.

The fieldwork in Bonaire was supported by a grant from the WWF-Netherlands Biodiversity Fund to BWH.

S.M., J.D.R., V.N.I., and J.E.G.-H. are grateful to Naturalis Biodiversity Center for supporting fieldwork in Bonaire (2019). We are grateful to STINAPA and DCNA at Bonaire for assistance in the submission of the research proposal and the research permit. S.M. would like to express his sincere gratitude to Morena Nava for the precious support provided. 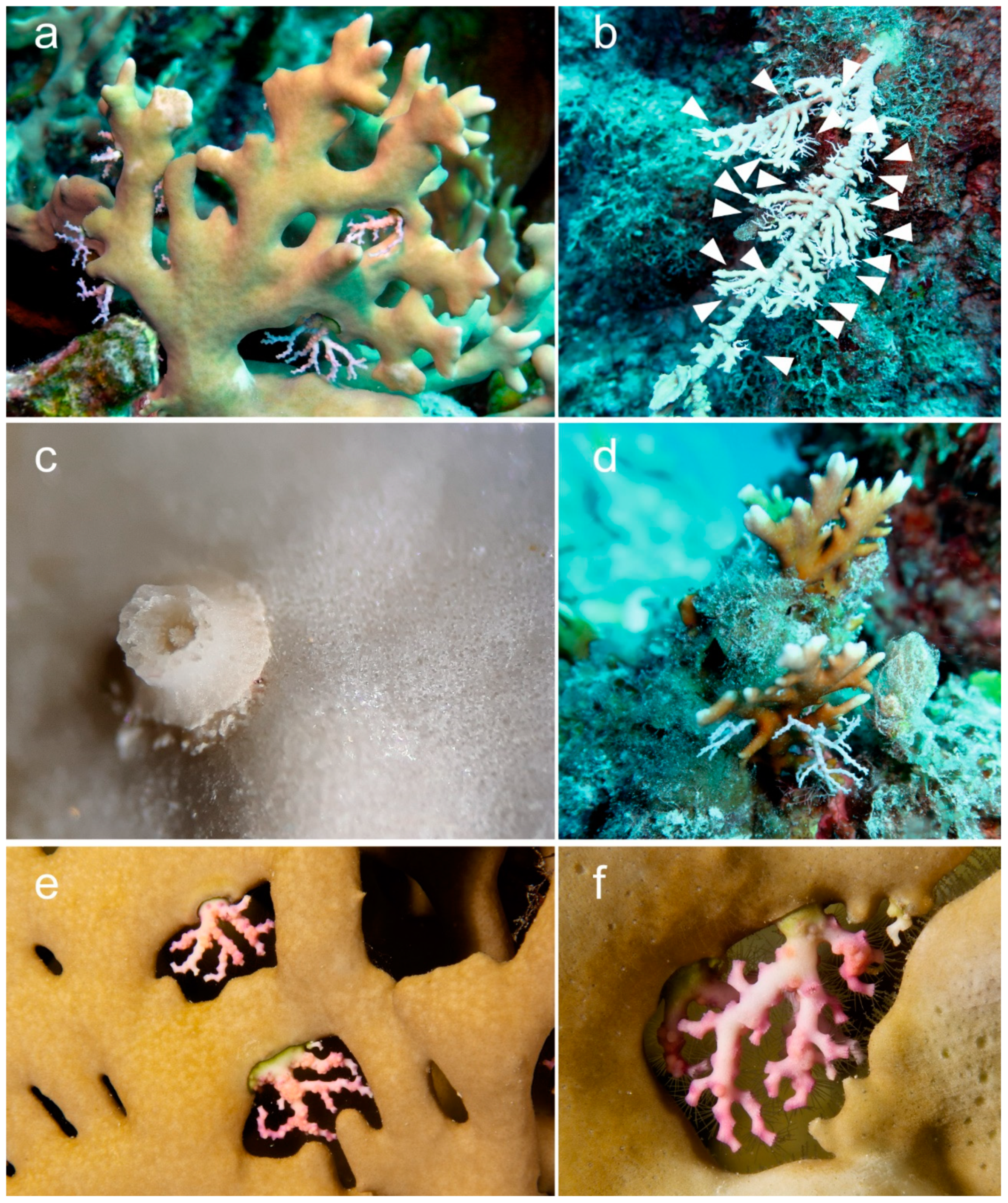