Ichthyological Differentiation and Homogenization in the Pánuco Basin, Mexico

Species introductions and extirpations are key aspects of aquatic ecosystem change that need to be examined at large geographic and temporal scales. The Pánuco Basin (Eastern Mexico) has high ichthyological diversity and ecological heterogeneity. However, freshwater fish (FWF) introductions and extirpations since the mid-1900s have modified species range and distribution. We examine changes in FWF species composition in and among four sub-basins of the Pánuco by comparing fish collection records pre-1980 to 2018. Currently, the FWF of the Pánuco includes 95 species. Fishes in the Poeciliidae, Cyprinidae, and Cichlidae, respectively, comprised most records over time. Significant differences in species composition were found between the first (pre-1980) and last (2011–2018) study periods, but not for periods in-between. Eight independent species groups were key for explaining changes in Pánuco river ichthyofauna; one group was dominated by invasive species, and saw increases in the number of records across study periods (faunal homogenization). Another group was formed by species with conservation concern with a declining number of records over time. Thirteen (2 native and 11 non-native) species were responsible for temporal turnover. These results strongly suggest high rates of differentiation over time (via native species loss) following widespread non-native species introductions. View Full-Text
Keywords: biogeography; community composition; differentiation; freshwater fishes; homogenization; Pánuco basin; watershed biogeography; community composition; differentiation; freshwater fishes; homogenization; Pánuco basin; watershed
►▼ Show Figures 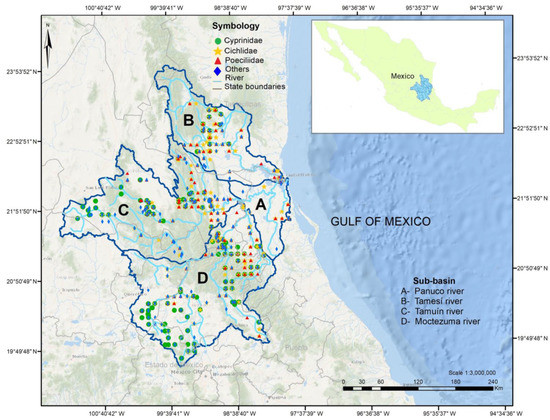