The Evolution and Biogeography of Wolbachia in Ants (Hymenoptera: Formicidae)

The biotas of the Galápagos Islands are one of the best studied island systems and have provided a broad model for insular species’ origins and evolution. Nevertheless, some locally endemic taxa, such as the Galápagos Rail Laterallus spilonota, remain poorly characterized. Owing to its elusive behavior, cryptic plumage, and restricted distribution, the Galápagos Rail is one of the least studied endemic vertebrates of the Galapagos Islands. To date, there is no genetic data for this species, leaving its origins, relationships to other taxa, and levels of genetic diversity uncharacterized. This lack of information is critical given the adverse fate of island rail species around the world in the recent past. Here, we examine the genetics of Galápagos Rails using a combination of mitogenome de novo assembly with multilocus nuclear and mitochondrial sequencing from both modern and historical samples. We show that the Galápagos Rail is part of the “American black rail clade”, sister to the Black Rail L. jamaicensis, with a colonization of Galápagos dated to 1.2 million years ago. A separate analysis of one nuclear and two mitochondrial markers in the larger population samples demonstrates a shallow population structure across the islands, possibly due to elevated island connectivity. Additionally, birds from the island Pinta possessed the lowest levels of genetic diversity, possibly reflecting past population bottlenecks associated with overgrazing of their habitat by invasive goats. The modern and historical data presented here highlight the low genetic diversity in this endemic rail species and provide useful information to guide conservation efforts. View Full-Text
Keywords: ancient DNA; genetic diversity; island colonization; Laterallus spilonota; Rallidae; phylogenetics ancient DNA; genetic diversity; island colonization; Laterallus spilonota; Rallidae; phylogenetics
►▼ Show Figures 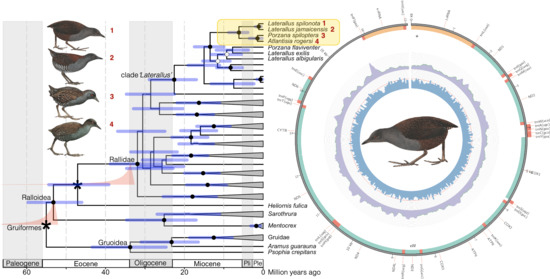