What is the Long-Term Effect of Bamboo Dominance on Adult Trees in the Araucaria Forest? A Comparative Analysis between Two Successional Stages in Southern Brazil
Next Article in Special Issue

Potential Invasion Risk of Pet Traded Lizards, Snakes, Crocodiles, and Tuatara in the EU on the Basis of a Risk Assessment Model (RAM) and Aquatic Species Invasiveness Screening Kit (AS-ISK)

Invasive species are considered to be among the major causes of biodiversity loss [1,2,3], and therefore conservation agencies around the world devote significant attention to this issue [4]. Time, money, and considerable effort are spent each year in the eradication, control and mitigation of non-native species [5]. However, despite the increasing interest of ecologists and conservation biologists in invasions [6], there is no sign that the introduction rate of non-indigenous species is slowing down [7].
In general, vertebrates are introduced more intentionally compared to other organisms [8]. The spread of non-native vertebrates took place in several historically specific waves and different taxonomic groups were at the peak of occupying new territories at different times. Fish, birds and mammals were introduced into new countries mainly in the 19th century and in the second half of the 20th century. On the other hand, the peak of reptile introductions was at the turn of the 20th and 21st centuries [9,10,11]—although many recent cases may have been overlooked. These differences have been caused by specificity of vectors and reasons for introductions. While fish, birds, and mammals were mostly introduced intentionally for the benefit, usually economic, of people [10], the main reason for reptile introductions is the pet trade (which makes up for about 45% of introductions), which can lead to their subsequent release or escape [12].
Increasing urbanization creates a desire for contact with nature for people living in towns and cities, and keeping pets is one way of fulfilling this need [13]. The popularity of reptiles as pets has been growing steadily since the second half of the 20th century [14,15]. Unfortunately, reptiles can have enormous negative ecological impacts, e.g., invasion of the brown tree snake (Boiga irregularis) on Guam island caused the extinction of 77% of the island’s native birds and 75% of its native lizards [16]. Also, other direct impacts on humans (e.g., (venomous) snakes or power outages caused by these snakes) cost a total of around $12 million per year [5]. One of the well-studied reptile invasions through the pet trade pathway in Europe is the case of the pond slider (Trachemys scripta). From 1989 to 1997, 52 million individual pond sliders were exported from the USA to Europe [17]. Because of the massive number of imports, they were sold very cheaply in pet shops. However, the growth of the turtle was associated with the loss of its attractive coloration and an increase in aggression, which often led unexperienced breeders to release them in the wild, where they would compete with native species of freshwater turtles for prey and places for basking [18,19]. Also, as a predator they can contribute to a local decline of native invertebrates, fish, or amphibians [20]. It is not surprising, therefore, that the import of T. s. elegans was banned by the EU’s Commission Regulation (EC) No 338/97 in 1997 (Official Journal of the European Union, 1997). Regardless of these two examples, reptiles have been widely overlooked in systematic invasion studies [21,22], and their establishment potential and invasion dynamics remain poorly understood [23].
The Czech Republic is the EU hub for the import and export of ornamental animals [24,25], and it is situated between three seas (Black, Baltic and North), which represents significant potential opportunity for the spreading of non-native species into other parts of Europe [26]. In previous articles, we evaluated invasion potential in the European Union for ornamental amphibians [27] and freshwater turtles [28] based on import data and offers from wholesalers from the Czech Republic. In this article, we complete an overview of ornamental herpetofauna by evaluating establishment potential and the impact on native ecosystems for the rest of the reptile taxonomical groups – lizards, snakes, crocodiles, and tuatara.

According to laws and regulations in force in the Czech Republic, the import of live animals and their products is registered by the Customs Administration of the Czech Republic. Therefore, to identify species of reptiles that are being offered in EU countries, we took species listed in materials of the Customs Administration and, additionally, surveyed the online price lists of five leading Czech wholesalers of ornamental animals and domestic producers of these animals to complete the list of potentially invasive reptiles. Furthermore, additional discussions were conducted with wholesalers and producers, who helped us clarify certain queries or provided supplementary information concerning the reptile trade, especially availability on the market. The survey was performed during the year 2016.
Altogether, 381 species from 20 families (Appendix Table A1) were identified as being on the pet market in the EU. In accordance with Nentwig et al. [29] we restricted our study to species with a native distribution entirely outside the European continent, mainly from different zoogeographical regions.
To stay consistent with previous studies about ectothermic tetrapods, we chose all states of the EU as the target region, while overseas departments and regions of France and Great Britain were not included in our study as parts of the EU [27,28].
We used two hierarchical models for determining the establishment and invasion risk: the Risk Assessment Model (RAM) for exotic amphibians and reptiles developed by the Australian Bureau of Rural Sciences [21,30] and the Aquatic Species Invasiveness Screening Kit v2.0 (AS-ISK) developed by Center for Environment Fisheries and Aquaculture Science (CEFAS) [31].
The species identified as being widely traded were firstly assessed by RAM, which tested the probability of their establishment, i.e., the formation of a self-sustaining population in a new environment [32], and then all species were evaluated for their invasion potential, i.e., their spread in the new environment simultaneously producing significant changes in the composition, structure, or processes of the ecosystem [32], in the EU by AS-ISK. We decided to use this approach mainly due to the fact that RAM is a model developed specifically for the determination of establishment only, while a major part of independently scored questions in AS-ISK deals with the potential impacts of an evaluated species rather than its ability to be introduced or established.
RAM is based on four parameters: (i) climatic similarity between the source (native distribution of species) and target regions (termed climate match risk score), (ii) species’ abilities to establish populations elsewhere (termed prop.species value), (iii) establishment success of species from the particular family (termed family random effect), and (iv) jurisdiction score, which accounts for expected variability in the establishment success rate due to the effect of a particular jurisdiction (country, state or province) and for all evaluated species is constant.
Climate match risk scores were computed using the program Climatch v1.0 (Bureau of Rural Sciences, 2008) with a Euclidean algorithm and 16 temperature and rainfall variables. This is based on comparison of data from climatic stations in the native range and data from climatic stations in the target region (EU in our case). Values of prop.species scores were computed originally for this study using the Kraus database [12]. When values for calculating prop.species or prop.genus were insufficient, we did not compute a prop.family value [22], but instead used approximation according to phylogenetically related genera i.e., the closest branches on an up-to-date phylogenetic trees. Family random effects were taken from Bomford [30]. If the value of family random effect was not listed, we substituted both potential extremes into the formula (−1.3 and 1.69), and then the range of values for risk score is presented. The risk score in RAM can reach values of 0–1, where establishment risk ranks are: low ≤ 0.16, moderate 0.17–0.39, serious 0.40–0.85 and extreme ≥ 0.86.
Not all traded species could be evaluated by the described procedure. The main problem was the impossibility of finding a map of occurrence or species living in such a small area which does not contain any climate station. Such species were therefore excluded from our analysis.
AS-ISK is an electronic toolkit which consists of 55 questions [31]. Some of the questions deal with biogeographical similarity, including the climate tolerance of the evaluated species, and some of the questions examine undesirable attributes, such as whether the species is poisonous or if it is a pathogen vector. However, most questions concern the species’ biological and ecological characteristics that can facilitate a potential invasion. There are also six questions related to climate change. For evaluating the invasion potential of ornamental reptiles, we used the sum of the scores from the questions dealing with biological and ecological features (this includes undesirable (or persistence) traits, resource exploitation, reproduction, dispersal mechanisms, and tolerance attributes). Because of the character of the questions in the AS-ISK software, we can argue that the AS-ISK invasion score from this part of the program expresses the species’ potential abilities to spread in a new environment and to alter the environment either directly or indirectly.
AS-ISK was originally developed for aquatic species. Thus, some questions (23., 44., 45. and 48.) concern characteristics related to life in a water environment. To stay consistent in our evaluation, which covers terrestrial species of reptiles, we used the term “Not applicable” as the answer for these questions across all evaluated species. The categorization (low, medium, or high invasion risk) of final numerical scores is not possible, because we did not use the AS-ISK overall score (i.e., BRA and BRA+CCA scores).
Each author of the article evaluated selected families by using both tools (RAM and AS-ISK). Before the start of the evaluation process, the authors attended three meetings for the unification of procedures and for clarifying specific issues. We searched for publications about the distribution and biology of assessed species, using their scientific names (and if necessary, their older synonyms) as search terms. Furthermore, relevant information provided on websites (www.iucn.org, https://nas.er.usgs.gov, www.animaldiversity.org), as well as literature cited therein, were used to compile published information available on selected species.

The basics (a distribution map, or the presence of a climatic station in the area of distribution) for a climate match of the 381 evaluated species was not found or did not exist for 73 of the species (19.2%). This portion was significantly different among families (contingency tables: χ² = 42.83, P < 0.0001), with varanidae (58%), gekkonidae (68%), and agamidae (72%) being the families with the lowest number of distribution records available, or with the absence of a climatic station in their limited range of occurrence.
Only 4 species (1.30% of those with available distribution maps or climatic stations) reached the RAM extreme risk rank (Table 1). The most numerous were species with a serious RAM risk rank—111 (36.04%)—followed by 106 species with a low RAM risk rank (34.41%) and 87 species with a moderate RAM risk rank (28.25%). We took the mean value of RAM scores if species had this value noted as a range.
Values of AS-ISK were not evenly distributed (Kolmogorov-Smirnov test: D = 0.09, P < 0.05), with the greatest portion of species scores from six to nine (Figure 1). However, values of AS-ISK 13 and more were rare and reached by only fifteen species – these can be identified as having the greatest potential to harm native species in the EU (Table 2).

O.K. is authors of original idea. Made conceptualization, supervision and data curation. Also wrote draft of manuscript, creates methodology and visualization of results in form of tables and figures, works with literature resources. Other authors works on data analysis of assigned families in software RAM and AS-ISK and provides review of final version of manuscript draft.

We thank Mary Bomford for her dedication to the question of risk assessment. The English was corrected by Jaroslav Janošek (correcta.cz). 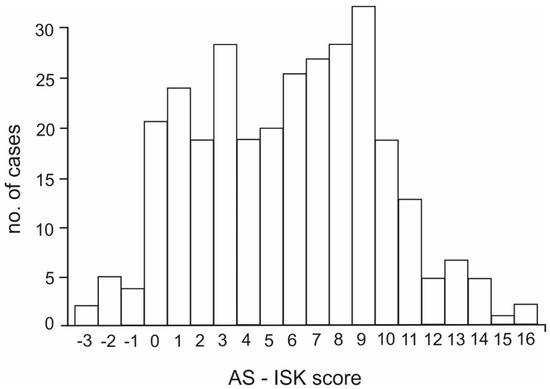 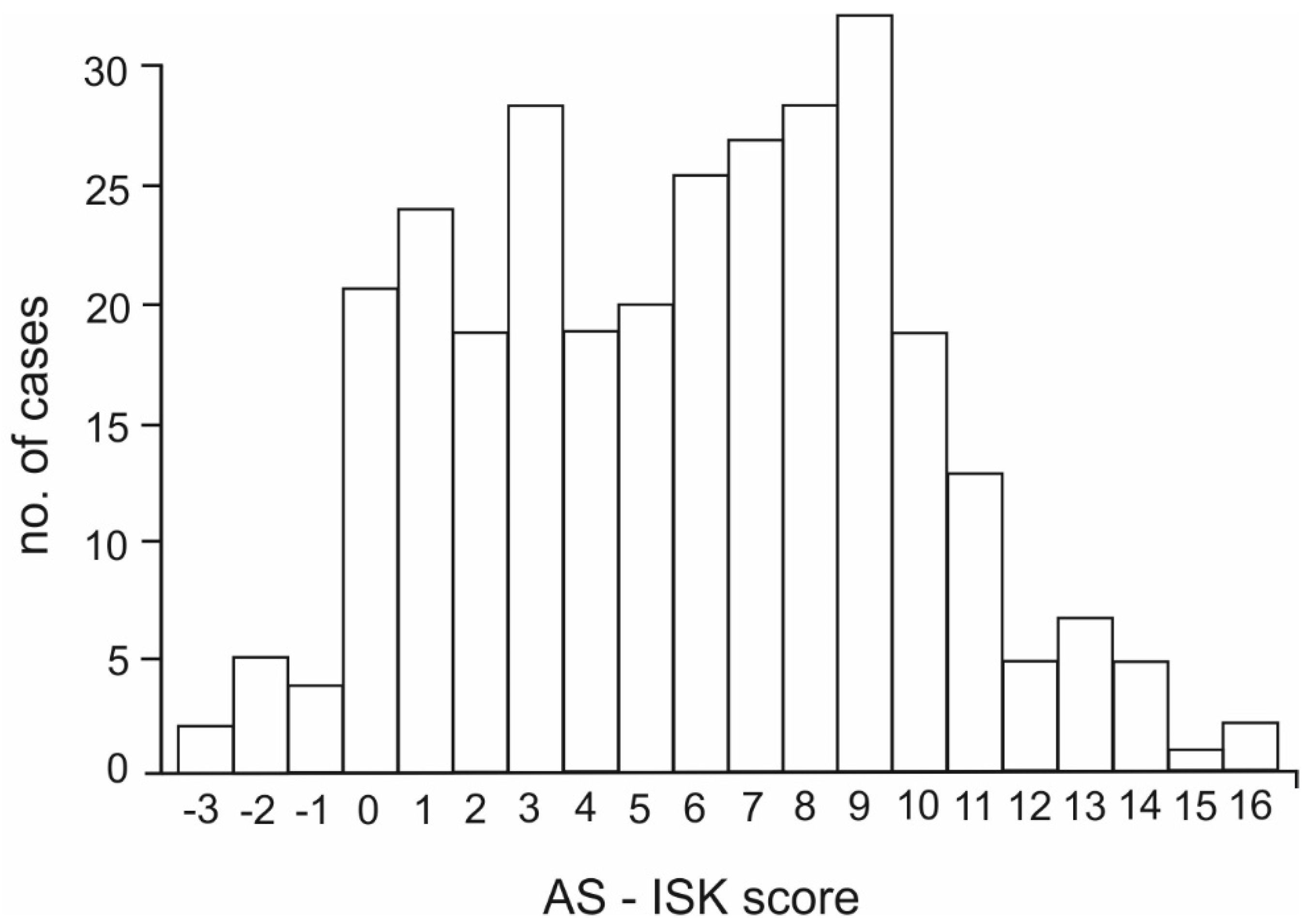