Potential Invasion Risk of Pet Traded Lizards, Snakes, Crocodiles, and Tuatara in the EU on the Basis of a Risk Assessment Model (RAM) and Aquatic Species Invasiveness Screening Kit (AS-ISK)
Next Article in Special Issue

Chiseling Away at the Dogma of Dietary Specialization in Dipodomys Microps

Stable Isotope Analyses of Multiple Tissues of Great Shearwaters (Ardenna Gravis) Reveals Long-Term Dietary Stability, Short-Term Changes in Diet, and Can be Used as a Tool to Monitor Food Webs

The great shearwater (Ardenna gravis) is a common pelagic bird with a distribution that spans almost the entire Atlantic basin, which in conjunction with its relatively high abundance, makes great shearwaters an effective bio indicator. We compared δ13C and δ15N values from the feathers, red blood cells (RBCs), and plasma of great shearwaters collected in 2014 and 2015 from the waters off Massachusetts and Cape Cod. The δ13C and δ15N values of RBCs were quite constant between sampling periods and years, suggesting a generally stable food web over that time period. However, the δ13C of plasma indicates a small seasonal change in diet between July and September for both years, with plasma δ15N values suggesting a slight increase in trophic level late in summer. Comparison of the δ15N of RBCs and plasma indicates that great shearwaters experienced a diet shift during the first few weeks of summer 2014, but not in 2015. Comparisons with other studies suggest that these shearwaters feed at a lower trophic level than great shearwaters sampled in the Bay of Fundy and that there is a decrease in δ13C with increasing latitude, which could indicate a more pelagic diet in northern waters. Stable isotope analysis of the sixth primary feathers provided evidence that these feathers are molted in the Northern Hemisphere and that the diet of great shearwaters shortly after arrival was different in 2014 and 2015. This study demonstrates that within species comparisons of tissue isotopic signatures over time and comparisons of isotopic signatures of tissues with different turnover rates, can detect changes in diet and be used as a tool to monitor for changes in marine food webs over time and space. The relevant signals remain informative even in the absence of species-specific data on tissue-diet discrimination factors, tissue turnover rates, or knowledge of dietary components and their stable isotopic signatures, suggesting dietary changes indicative of a corresponding change in the food web. View Full-Text
Keywords: feather; plasma; red blood cells; isotopic clock; tissue comparison; half-life; isoscape feather; plasma; red blood cells; isotopic clock; tissue comparison; half-life; isoscape
►▼ Show Figures 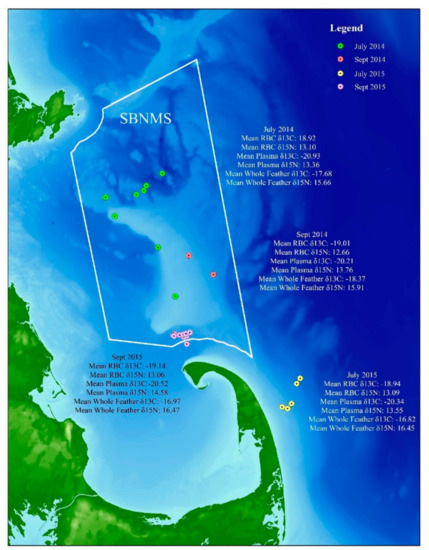