Do Local Environmental Factors and Lunar Cycle Influence Timing and Synchrony of Oviposition of a Turtle with Strict Nocturnal Nesting?

Timing of nesting affects fitness of oviparous animals living in seasonal environments, and females may cue on environmental factors for their nesting behavior, but these relationships are understudied in tropical turtles. Here, the timing and synchrony of egg-laying relative to environmental factors were examined in the South American freshwater turtle Podocnemis unifilis on 11 nesting beaches during three nesting seasons. Daily measurements included number of nests laid, rainfall, river level, air temperature, and the phase of the lunar cycle (full moon, last quarter, new moon and first quarter). Results confirmed that P. unifilis nested at night and revealed that females in our population nest in groups from 2 to 17 females at a time. Nesting was not correlated with rainfall, but a significant relationship was found with river level, such that nesting started at the onset of the dry season when river levels dropped and nesting grounds emerged. Importantly, we found that (1) nesting events concentrated on days with intermediate daily maximum air temperature (although maxima changed annually), and that (2) larger groups of females nested around full moon, suggesting the reliance on visual cues to initiate nesting activities (consistent with social facilitation behavior). Altogether, the timing of nesting in P. unifilis may be shaped by a combination of environmental factors, moon phase and social facilitation, where visual cues play an important role. View Full-Text
Keywords: Podocnemis unifilis; weather conditions; moon phase; reproductive timing; social facilitation Podocnemis unifilis; weather conditions; moon phase; reproductive timing; social facilitation
►▼ Show Figures 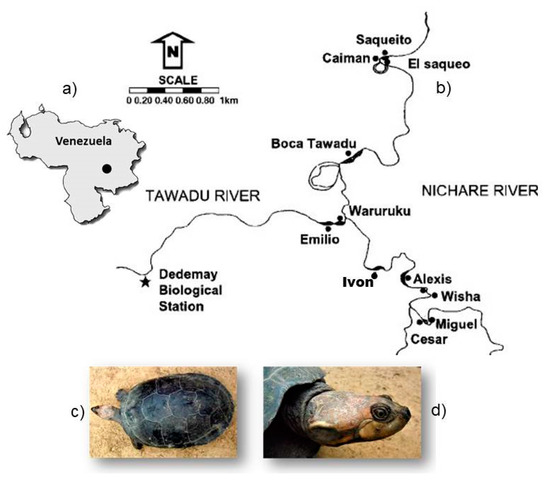