(1) Background: Neotropical montane forests represent one of the most diverse world ecosystems; however, they are also among the most threatened ones mostly due to deforestation. Our main goal is to classify and clarify the forest types based on the changes in basal area (BA), tree density, and species composition of montane forests in Southern Ecuador, and to determine the influence of critical environmental and geomorphological factors. (2) Methods: One hundred thirty-two temporary plots of 400 m2 were installed in homogeneous and well-conserved forest stands. We identified and measured all trees >10 cm diameter breast height (DBH). We modeled species diversity (Fisher’s alpha) change in relation to climatic, altitudinal, and geomorphological gradients using GLM and Kruskall-Wallis analyses. The change in composition was determined using cluster analyses (BIOENV analysis followed by a LINKTREE procedure). Non-metric multidimensional scaling (NMDS) was used to analyze changes across climatic and geomorphological gradients. Finally, we used a SIMPER analysis to identify the species that contributed most to the floristic dissimilarity among the identified altitudinal forests types. (3) Results: The floristic groups were determined by altitude, temperature, and isothermality, but also some geomorphological variables and lithology were used. Plots located in low hills have higher alpha diversity compared to the high hills and dissected mountains. (4) Conclusions: Altitude is the most important factor responsible for the division of structural and floristic groups. In addition, those plots located on the whitish tuff have higher alpha value diversity compared with plots in andesitic tuffs. Precipitation on the wettest quarter (>839 mm) and isothermality (>90.5) are the most relevant climatic factors driving the floristic classification. View Full-Text
Keywords: Alpha diversity; beta diversity; diversity patterns; altitudinal gradients; geomorphology; Ecuador; mountain forests Alpha diversity; beta diversity; diversity patterns; altitudinal gradients; geomorphology; Ecuador; mountain forests
►▼ Show Figures 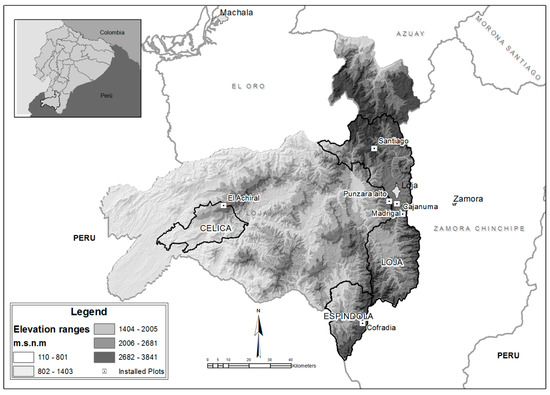