Influence of Landscape Factors on Amphibian Roadkills at the National Level

Roads exert multiple effects on wildlife, from animal mortality, habitat and population fragmentation, to modification of animal reproductive behaviour. Amphibians are the most frequently road-killed animal group. Many studies have attempted to analyse the factors driving amphibian casualties on roads, but these factors are limited to the roads themselves (e.g., traffic, type of roads, roads crossing water bodies) or to structures along them (e.g., ditches, walls). Sometimes, roadkills are related to land use along the roads. We analysed the influence of landscape factors on roadkill hotspots at the national level (Slovenia). Specifically, we aimed at: (1) identifying hotspots of roadkills, (2) analysing whether records of amphibian presence on roads are related to the distribution of water bodies and (3) analysing which factors (proximity to water bodies or human factors) explain the distribution of hotspots. Hotspots were identified by Malo’s method. Roadkills were modelled with Maxent for the first time in Slovenia. The relationships between amphibian presence and hotspots with factors were analysed with GLM. A total of 237 road sections were identified as hotspots, corresponding to 8% of road sections and containing 90% of road-killed individuals. Proximity to forests, meadows and agricultural land were the most important variables in Maxent models. The number of roadkills depended on the proximity to agricultural land, forests, water bodies and wetland areas, while the number of hotspots additionally depended on the proximity to urban settlements. View Full-Text
Keywords: amphibian conservation; Slovenia; road mortality; hotspots amphibian conservation; Slovenia; road mortality; hotspots
►▼ Show Figures 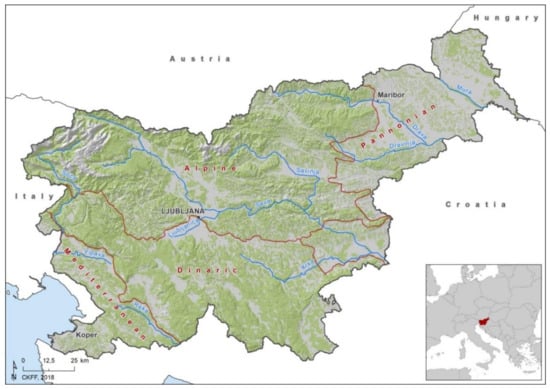