There is increasing evidence of poleward migration of a broad range of taxa under the influence of a warming ocean. However, patchy research effort, the lack of pre-existing baseline data, and taxonomic uncertainty for some taxa means that unambiguous interpretation of observations is often difficult. Here, we propose that heterobranch sea slugs provide a useful target group for monitoring shifts in distribution. As many sea slugs are highly colourful, popular with underwater photographers and rock-pool ramblers, and found in accessible habitats, they provide an ideal target for citizen scientist programs, such as the Sea Slug Census. This maximises our ability to rapidly gain usable diversity and distributional data. Here, we review records of recent range extensions by tropical species into the subtropical and temperate waters of eastern Australia and document, for the first time in Australian waters, observations of three tropical species of sea slug as well as range extensions for a further six to various locations in the Tasman Sea. View Full-Text
Keywords: range extension; climate change; heterobranch; citizen science; Sea Slug Census; biodiversity range extension; climate change; heterobranch; citizen science; Sea Slug Census; biodiversity
►▼ Show Figures 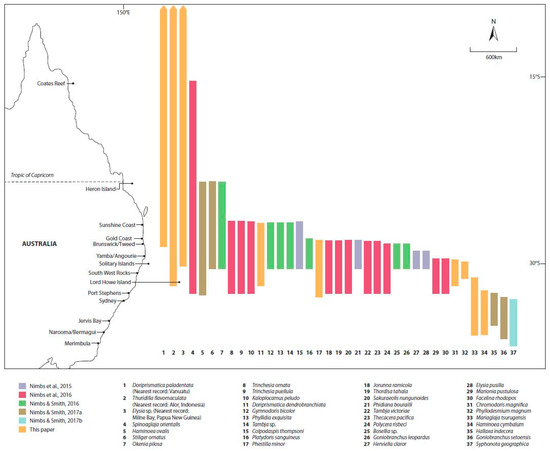