Urban Re-Greening: A Case Study in Multi-Trophic Biodiversity and Ecosystem Functioning in a Post-Industrial Landscape
Previous Article in Journal

The multitrophic interactions in the rhizosphere impose significant impacts on microbial community structure and function, affecting nutrient mineralisation and consequently plant performance. However, particularly for long-lived plants such as forest trees, the mechanisms by which trophic structure of the micro-food web governs rhizosphere microorganisms are still poorly understood. This study addresses the role of nematodes, as a major component of the soil micro-food web, in influencing the microbial abundance and community structure as well as tree growth. In a greenhouse experiment with Pedunculate Oak seedlings were grown in soil, where the nematode trophic structure was manipulated by altering the proportion of functional groups (i.e., bacterial, fungal, and plant feeders) in a full factorial design. The influence on the rhizosphere microbial community, the ectomycorrhizal symbiont Piloderma croceum, and oak growth, was assessed. Soil phospholipid fatty acids were employed to determine changes in the microbial communities. Increased density of singular nematode functional groups showed minor impact by increasing the biomass of single microbial groups (e.g., plant feeders that of Gram-negative bacteria), except fungal feeders, which resulted in a decline of all microorganisms in the soil. In contrast, inoculation of two or three nematode groups promoted microbial biomass and altered the community structure in favour of bacteria, thereby counteracting negative impact of single groups. These findings highlight that the collective action of trophic groups in the soil micro-food web can result in microbial community changes promoting the fitness of the tree, thereby alleviating the negative effects of individual functional groups. View Full-Text
Keywords: soil micro-food web; nematodes; trophic structure; microorganisms soil micro-food web; nematodes; trophic structure; microorganisms
►▼ Show Figures 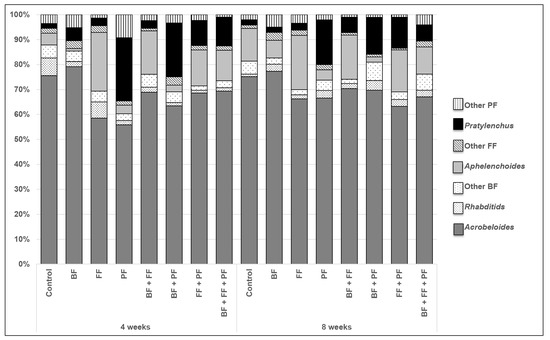