Diethyl pyrrole-2,5-dicarboxylate 1 was first described in 1886 [1], and has since been prepared by a variety of methods [2,3]. It has found uses in medicinal chemistry as a precursor in the synthesis of pyrrolo[1,2-b]pyridazines for the treatment of proliferative disorders [4] and as potential Janus kinase inhibitors [5] as well as in the photochemical synthesis of tricyclic aziridines [6]. Despite its long history, the compound is seldom mentioned in the literature and was not characterised spectroscopically until 2009 [3]. We recently obtained pyrrole diester 1 by an unexpected and novel route and report here the determination of its molecular and crystal structure by X-ray diffraction. The structure was compared with those previously reported for similar pyrrole esters.

Our intention was to try and form the parent heterocycle 1,4-thiazine whose synthesis was claimed in 1948 [7], but has never been repeated. Starting from ethyl bromopyruvate 2 and cysteine ethyl ester hydrochloride 3, the diethyl dihydrothiazinedicarboxylate 4 was prepared [8] (Scheme 1). This could be effectively dehydrogenated to give compound 6 either by oxidation with m-chloroperbenzoic acid to the sulfoxide 5, followed by spontaneous thermal dehydration [8] or directly using DDQ (2,3-dichloro-5,6-dicyano-1,4-benzoquinone) as described in the literature [8]. We then attempted to hydrolyse the ester groups of 6 to get the corresponding diacid for subsequent decarboxylation, but when a solution of the diester in ether was stirred with NaOH in ethanol at RT for 17 h, it gave upon evaporation and chromatographic purification a moderate yield of a compound that proved to be pyrrole diester 1 (41%), showing excellent agreement with the spectroscopic data in the literature [3]. Since it has not been reported before, we include here the UV–Visible spectrum of 1 (see Experimental Section and Supplementary Materials).
It seems likely that the reaction involves the loss of elemental sulfur, most likely from an anionic form of thiazine diester 6 as shown in Scheme 2. Although extrusion of sulfur from various ring-fused thiazine systems to give the corresponding pyrroles is known to occur thermally [9,10,11], the corresponding reaction of monocyclic thiazines is rather rare [12], and the only similar examples we are aware of are a series of the isomeric 1,4-thiazine-2,6-diesters 7, which are reported to give the pyrrole diesters 8 upon treatment with triethylamine [13,14].
In light of the unexpected reaction involved in going from 6 to 1, we took the opportunity to confirm the product structure unambiguously through X-ray diffraction. The resulting molecular structure (Figure 1) shows bond lengths and angles within the expected range, but a slight inequivalence in the dimensions around the two ester carbonyls (Table 1 and Table 2), which reflects the fact that one is involved in hydrogen bonding and the other is not.
This was clearer when we examined the unit cell and saw that the crystal structure consisted of pairs of hydrogen bonded molecules. When these are viewed along the b axis, they appear to be all coplanar, but this is misleading as the view along the a axis makes clear (Figure 2). The hydrogen bonding parameters (Table 3) are in agreement with the expectation for a strong NH to C=O interaction.
A survey of the relatively small number of other crystallographically characterised 2-acylpyrroles in the Cambridge Structural Database (CSD) showed that such dimers are in fact the commonest structural motif with the alternative linear arrangement being much less common (Figure 3).
A study by Senge and Smith in 2005 [15] showed that the series of six 2-acyl-3,5-dimethylpyrroles 9–14 all adopted such hydrogen bonded dimer structures, except for compound 13 where chains formed by hydrogen bonding of NH to the 4-acetyl-C=O. In another study of the three 3-methoxy-4-methylpyrrole esters 15–17, 15 and 16 were also found to form hydrogen bonded dimers whereas the 5-unsubstituted compound 17 instead exhibited the chain structure [16]. Interestingly, the formyl group in 16, which could also have been involved in hydrogen bonding, was oriented away from NH, presumably for steric reasons. For the 3-hydroxy compound 18, the ester carbonyl was oriented away from NH as it was intramolecularly hydrogen bonded to the OH, and NH, then formed chains by hydrogen bonding intermolecularly to the OH as shown [16].
In summary, we obtained diethyl pyrrole-2,5-dicarboxylate in moderate yield by a new and unexpected heterocyclic transformation, and found that its crystal structure featured hydrogen bonded dimers similar to the structure adopted by most crystallographically characterised 2-acylpyrroles. Work to determine the scope and applications of this new pyrrole synthesis is currently in progress.

Melting points were recorded on a Reichert hot-stage microscope (Reichert, Vienna, Austria) and are uncorrected. IR spectra were recorded on a Perkin-Elmer 1420 instrument (Perkin-Elmer, Waltham, MA, USA). NMR spectra were obtained for protons at 400 MHz and for carbon at 100 MHz using a Bruker AV400 instrument (Bruker, Billerica, MA, USA). Spectra were run at 25 °C on solutions in CDCl3 with internal Me4Si as the reference. Chemical shifts are reported in ppm to high frequency of the reference and coupling constants J are in Hz.

The following is available online, Figure S1: UV–Visible spectrum of 1 in MeCN.

C.B. and L.J.R.M. prepared the compound; A.M.Z.S. collected the X-ray data and solved the structure; R.A.A. designed the experiments, analysed the data, and wrote the paper. All authors have read and agreed to the published version of the manuscript. 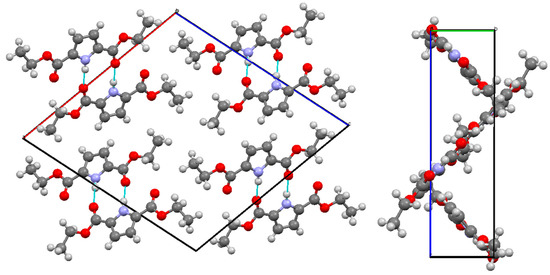 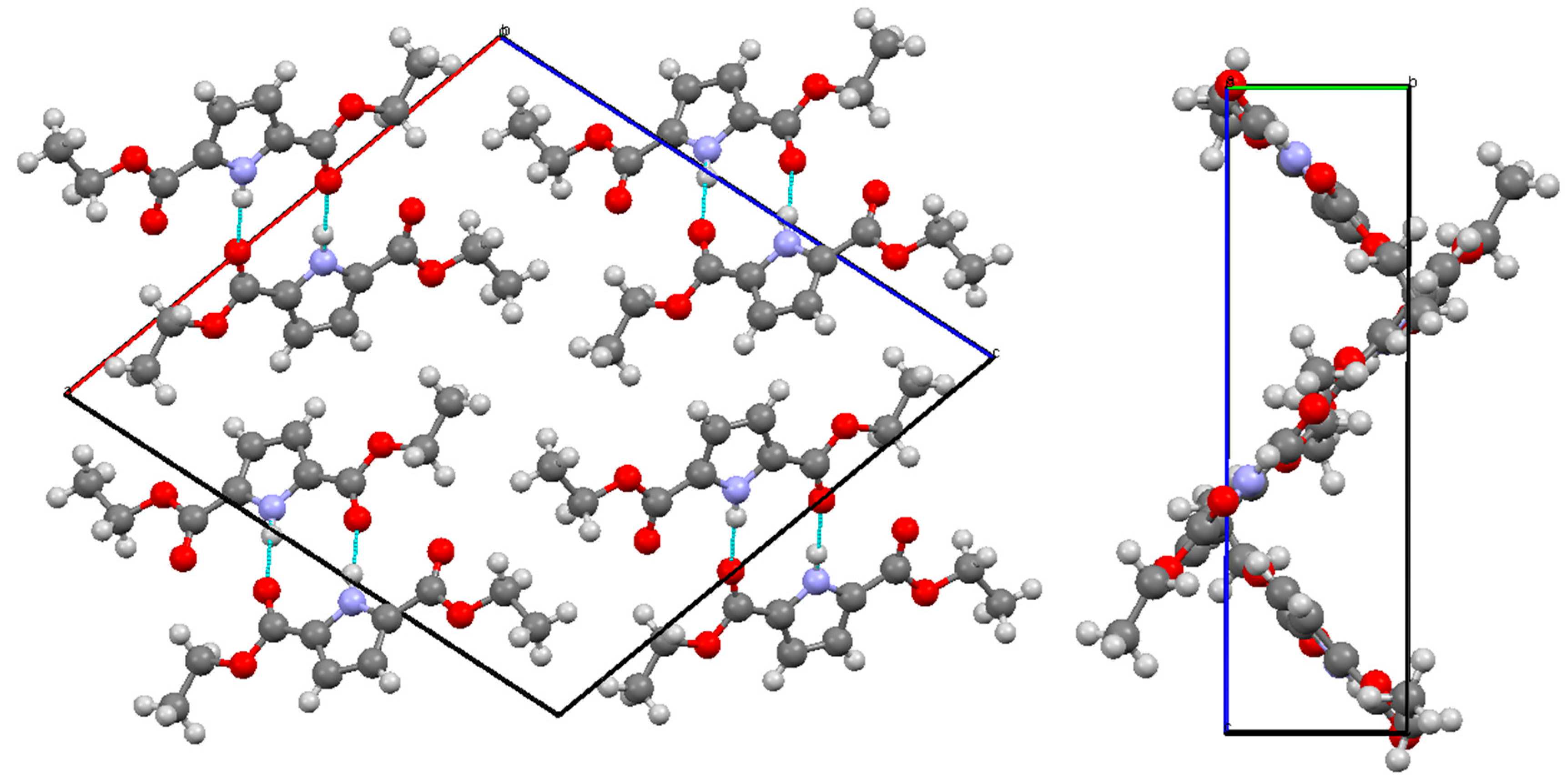 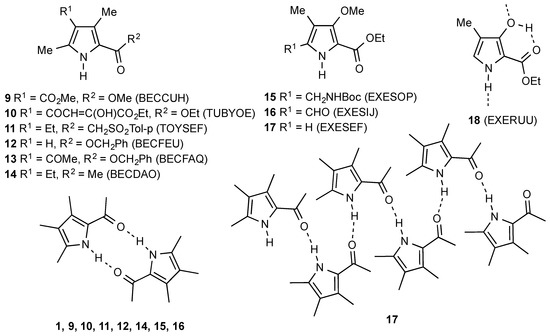 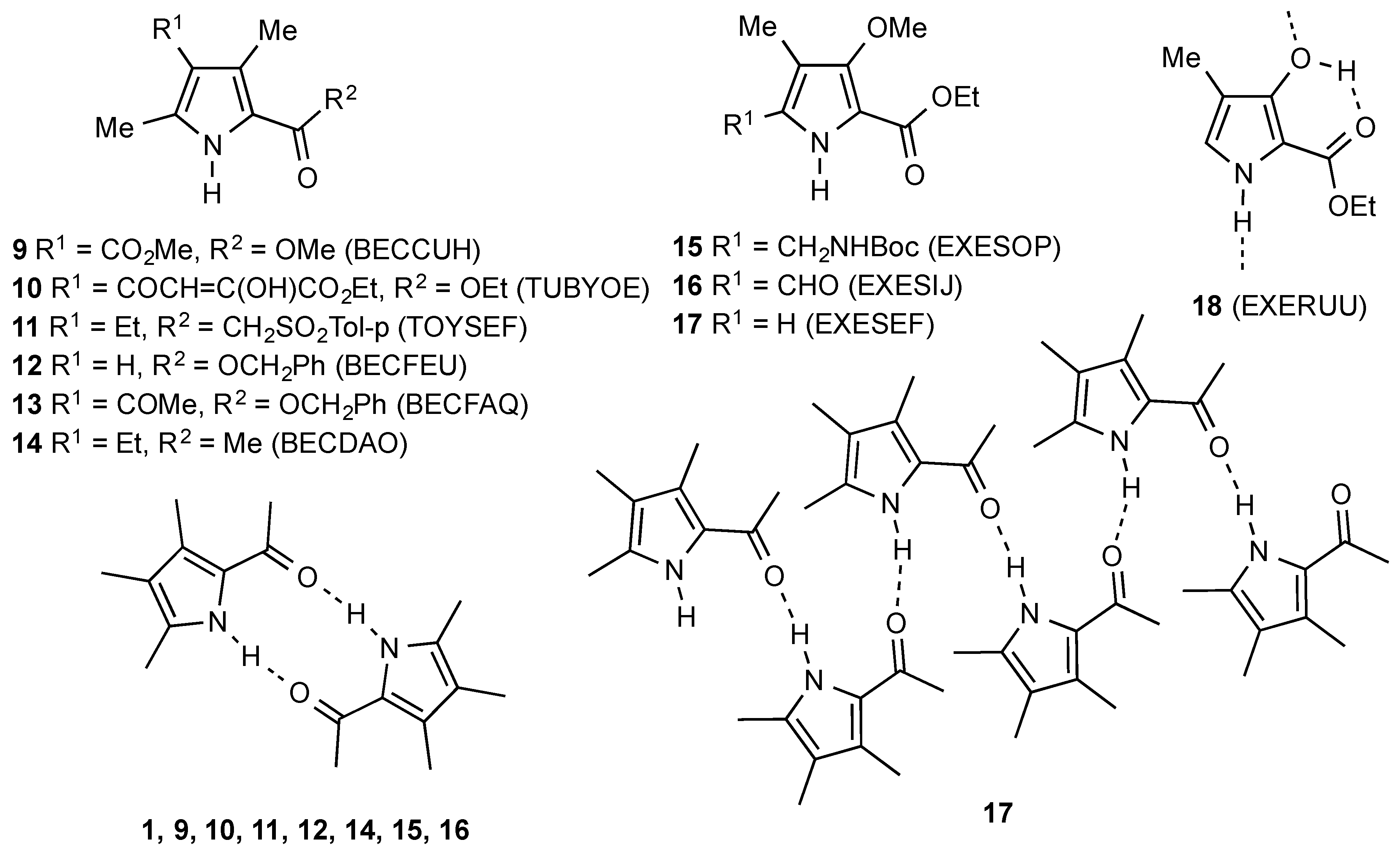 Table 3. Hydrogen bonding parameters for 1 (Å, °).
Table 3. Hydrogen bonding parameters for 1 (Å, °).
© 2020 by the authors. Licensee MDPI, Basel, Switzerland. This article is an open access article distributed under the terms and conditions of the Creative Commons Attribution (CC BY) license (http://creativecommons.org/licenses/by/4.0/).
We use cookies on our website to ensure you get the best experience. Read more about our cookies here.
Accept
We have just recently launched a new version of our website. Help us to further improve by taking part in this short 5 minute survey here. here.
Never show this again