(2Sp,4R,8Sp)-4-Methyl-1-phenyl-diferroceno-5-Z-ethylene-1-phosphinoxide
Next Article in Special Issue

Unexpected Formation of Oxetanes during the Synthesis of Dodeco-6,7-diuloses
Previous Article in Journal

N′-acetyl and N′-benzoyl hydrazide derivatives containing a heterocycle nucleus have shown antimicrobial and anti-TB activities [1,2]. These compounds are usually synthesized from carbohydrazide derivatives by an addition–elimination reaction with acyl chlorides [3,4]. N′-acetyl and N′-benzoyl hydrazides are also used for the synthesis of 1,3,4-oxadiazole compounds, which can be found in the structure of molecules with reported bioactivity to several targets and related to a wide range of diseases [5,6,7].
On the other hand, N′-acetyl derivatives are often found as the metabolites of the hydrazide group from drugs, such as isoniazid [8,9]. However, the administration of acetylisoniazid leads to diacetylhydrazine (CH3CONHNHCOCH3) as the primary metabolite excreted in which the acyl C–N bond from the pyridine–carboxamide is more susceptible to lysis than is the acyl C–N bond from the alkylamide group [8].
Herein, we describe an unexpected approach to obtain N′-acetylhydrazides from hydrolysis of the 3-acetyl-2,3-dihydro-1,3,4-oxadiazole derivatives of 1,6-diphenyl-1H-pyrazolo[3,4-b]pyridine nucleus and their characterization by spectroscopic methods.

Hydrolysis methods using sodium acetate are widely used in aromatic acetate deprotection reactions, whereas the ordinarily, stable, aliphatic amides require stronger hydrolysis conditions than the ester motif [10]. In this sense, it could be expected that the mild alkaline and/or no heating conditions could provide the selective hydrolysis of the O-acetyl group from the phenyl acetates of 3-acetyl-5-(3-methyl-1,6-diphenyl-1H-pyrazolo[3,4-b]pyridin-4-yl)-2,3-dihydro-1,3,4-oxadiazol-2-yl.
In fact, if the treatment of compounds 1a–1c with a 4.2 M aqueous NaOAc solution in n-butanol at room temperature did not give any reaction, the exposure to a methanolic/aqueous NaHCO3 solution at room temperature resulted as being effective in the O-acetyl group cleavage [11]. Conversely, both the treatment with a 4.2 M aqueous NaOAc solution in n-butanol under conventional heating or microwave irradiation (Methods A and B, respectively) and with a methanolic KOH (3 equiv.) solution (Method C) yielded the N′-acetylhydrazide derivative 2 (Scheme 1), as a consequence of the 2,3-dihydro-1,3,4-oxadiazole rings’ degradation [12]. The opening of the 2,3-dihydro-1,3,4-oxadiazoles was previously reported under acidic conditions only [13,14].
The structure of compound 2 was confirmed by spectroscopic methods (Infrared (IR), nuclear magnetic resonance (NMR) and high-resolution mass spectrometry (HRMS), Figures S1–S4). In the protonic nuclear magnetic resonance (1H-NMR) spectrum of compound 2, the signals of the protons from 1,6-dipheny-1H-pyrazolo[3,4-b]pyridine nucleus were observed at δ 2.64 ppm (s, 3H) for the methyl group at the C-3 position; δ 7.36 (dd, 1H), δ 7.55–7.62 ppm (m, 5H), δ 8.25 (d, 2H) and δ 8.33 ppm (d, 2H) for phenyl groups in the N-1 and C-6 positions; and δ 7.90 ppm (s, 1H) for the aromatic proton at the C-5 position [11]. Additionally, one signal at δ 2.00 ppm (s, 3H) corresponding to the methyl group from acetyl-hydrazine moiety and two signals at δ 10.03 ppm (s, 1H) and δ 10.56 ppm (s, 1H) corresponding to hydrazide protons (RCONHNHCOR’), were observed. The protons of the 2,3-dihydro-1,3,4-oxadiazole ring (singlet at δ 7.1 ppm) and of the substituted phenyl groups present in the compounds 1a–1c were not observed [11]. In the same way, the signals corresponding to the carbons of these moieties in the APT spectrum were also not detected. The splitting of signals observed in the NMR spectra of compound 2 could be related to the presence of conformers around the N–CO bond, as reported for similar compounds [15,16]. However, it needs further analysis. In the HRMS spectrum of compound 2, the presence of the molecular ion peak at m/z = 386.1611 ([M + H]+) supported the proposed structure.
In conclusion, we have described the unusual synthesis of N’-acetylhydrazide 2 from derivatives 1a–1c. These results show the lability of the 2,3-dihydro-1,3,4-oxadiazole ring in alkaline medium. This fact could be exploited for stability studies related to drugs containing this moiety.

A suspension of 2-(acetoxyphenyl)-2,3-dihydro-1,3,4-oxadiazole (1b, 0.12 g, 0.21 mmol) in n-butanol (1 mL) was stirred at reflux temperature until complete solubilization. Then, NaOAc (0.5 mL of a 4.2 M aqueous solution, 2.1 mmol) was added, and the mixture was stirred for additional 3 h at reflux temperature. The reaction was monitored by TLC using ethyl acetate in hexane 3:4 v/v as the eluent. At the end of the reaction, the solution was cooled at room temperature and poured into water (10 mL). The mixture was extracted with ethyl acetate (3 × 10 mL). The combined organic phases were washed with brine, dried over anhydrous sodium sulfate, and the solvent was removed under vacuum. Recrystallization from methanol gave pure 2 (0.052 g, 64% yield).

This study was supported in part by Brazil’s funding agencies, CAPES (Coordination of Improvement of Higher Education Personnel) and FAPERJ (Foundation for Research Support of the State of Rio de Janeiro). 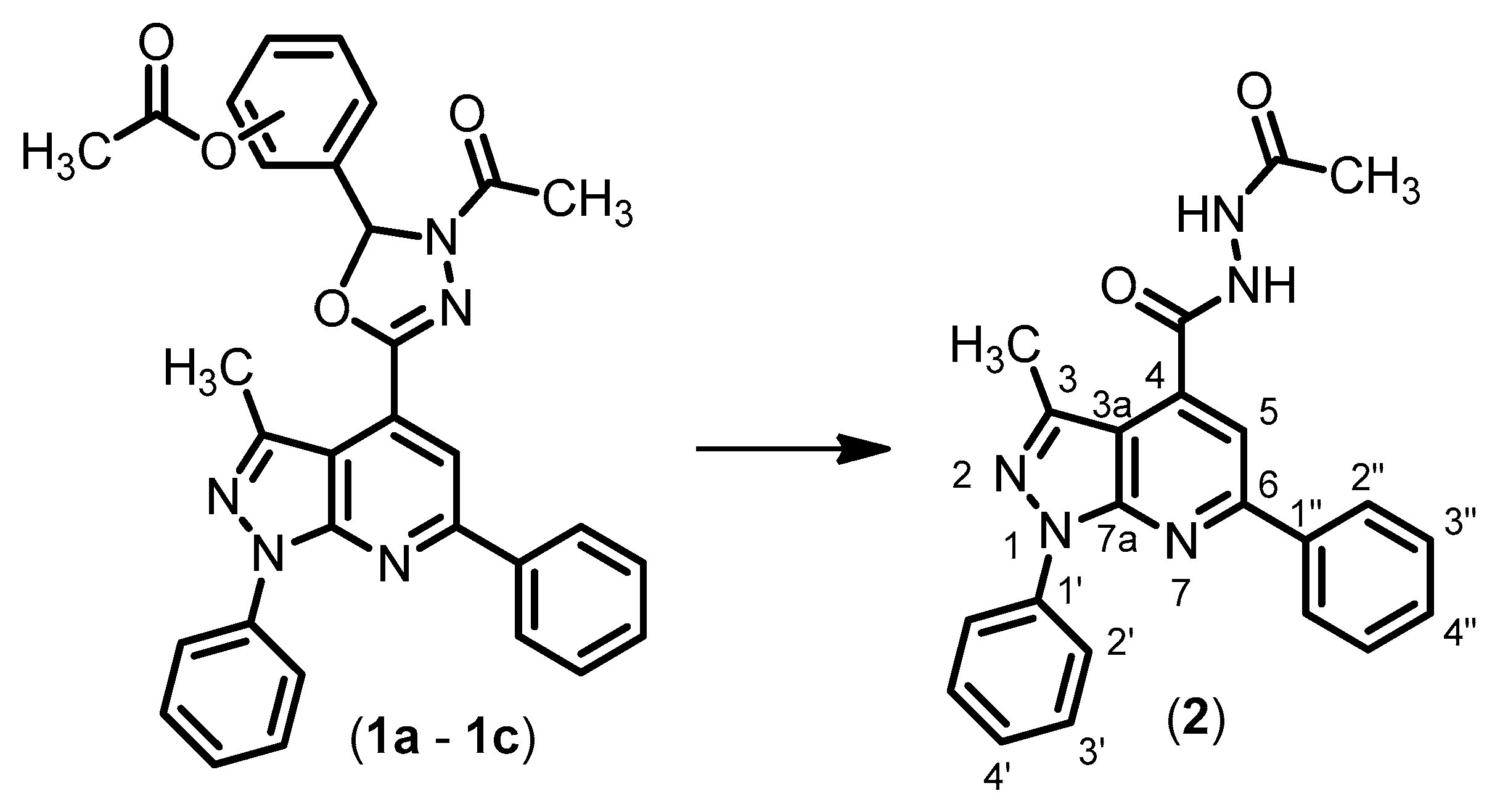