Impact of Air Pollution in Airway Diseases: Role of the Epithelial Cells (Cell Models and Biomarkers)
Next Article in Special Issue

Unsupervised Learning in Drug Design from Self-Organization to Deep Chemistry

Nitric oxide (NO) is a powerful vasodilator in different vascular beds and NO-donors are widely used in clinical practice. Early data suggested that NO and NO-donors activate vascular smooth muscle high-conductance, calcium-activated potassium channels (BK channels). There exist two hypotheses explaining the effect of NO and NO-donors on BK channels—one stating that protein kinase G (PKG) mediates the effect of NO, and the other one stating that NO acts directly on the channel. Thus, the degree of contribution of PKG to the NO-induced activation of the BK channel is still not completely clear. This study tested the hypothesis that the sodium nitroprusside (SNP)-induced activation of vascular smooth muscle BK channels is fully mediated by PKG. This hypothesis was investigated using the patch-clamp technique and freshly isolated smooth muscle cells from rat tail artery. In whole-cell experiments, SNP considerably increased the outward current compared with the addition of the bath solution. SNP did not alter the current in the presence of iberiotoxin, the specific blocker of BK channels, during co-application with hydroxocobalamin, an NO-scavenger, and in the presence of Rp-8-Br-PET-cGMPS, the specific PKG-inhibitor. In inside-out patches, the activity of BK channels was increased by SNP, SNAP, and DEA-NO. However, these effects did not differ from the effect of the application of drug-free bath solution. Furthermore, a similar increase in single BK channel activity was induced by Rp-8-Br-PET-cGMPS, Rp-8-Br-PET-cGMPS together with SNP, hydroxocobalamin, and hydroxocobalamin together with SNP or DEA-NO. Finally, the activity of excised BK channels did not change in the absence of any application but was considerably increased by PKG compared with the addition of drug-free bath solution. These results suggest that NO released from NO-donors stimulates the BK current only through activation of PKG. View Full-Text
Keywords: arteries; smooth muscle; calcium activated potassium channel; nitric oxide; sodium nitroprusside; protein kinase G arteries; smooth muscle; calcium activated potassium channel; nitric oxide; sodium nitroprusside; protein kinase G
►▼ Show Figures 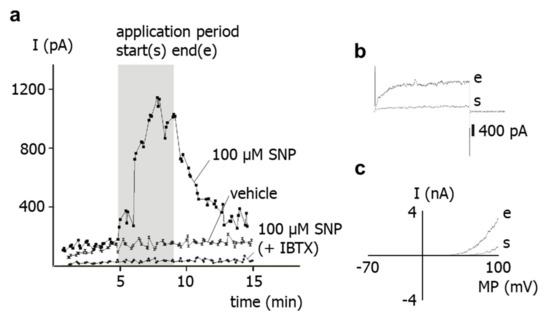 
Gagov, Hristo, Irina V. Gribkova, Vladimir N. Serebryakov, and Rudolf Schubert. 2022. "Sodium Nitroprusside-Induced Activation of Vascular Smooth Muscle BK Channels Is Mediated by PKG Rather Than by a Direct Interaction with NO" International Journal of Molecular Sciences 23, no. 5: 2798. https://doi.org/10.3390/ijms23052798