A Review of the Common Neurodegenerative Disorders: Current Therapeutic Approaches and the Potential Role of Nanotherapeutics

Evolutionary Analysis of Dipeptidyl Peptidase I

Human dipeptidyl peptidase I (DPPI) belongs to the family of papain-like cysteine peptidases. Its distinctive features are the unique exclusion domain which enables the eponymous activity and homotetramerization of DPPI, and its dependence on chloride ions for enzymatic activity. The oligomeric state of DPPI is unique in this family of predominantly monomeric peptidases. However, a distant DPPI ortholog from Plasmodium falciparum has been shown to be monomeric, indicating that the oligomeric state of DPPI varies between lineages. The aim of this work was to study the evolution of DPPI, with particular attention to the structural features that determine its characteristic enzymatic activity and preferences, and to reconstruct the evolution of its oligomerization. We analyzed fifty-seven selected sequences of DPPI and confirmed its presence in three lineages, namely, Amorphea (including animals and Amoebozoa), Alveolates and the metamonad Giardia. The amino acid residues that bind the chloride ion are highly conserved in all species, indicating that the dependence on chloride ions for activity is an evolutionarily conserved feature of DPPI. The number of N-glycosylation sites is significantly increased in animals, particularly vertebrates. Analysis of homology models and subunit contacts suggests that oligomerization is likely restricted to DPPIs in the Amorphea group. View Full-Text
Keywords: oligomerization; molecular evolution; cathepsin C oligomerization; molecular evolution; cathepsin C
►▼ Show Figures 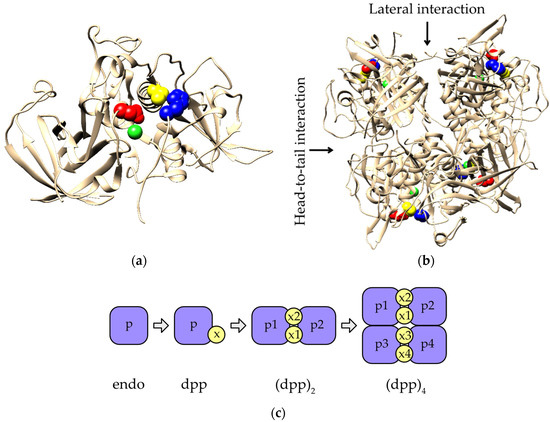