Commonalities in the Features of Cancer and Chronic Fatigue Syndrome (CFS): Evidence for Stress-Induced Phenotype Instability?
Previous Article in Journal

Irisin and Secondary Osteoporosis in Humans

The efficacy of taxane-containing therapy in patients with breast cancer is multi-factorial. In several clinical studies, the level of Tau in patients is identified as a biomarker for predicting the outcome of treatment with taxane [22]. As observed in our previous study and reported by others as well, in the polymerization of neuronal microtubules in vitro, Tau protein catalyzes the self-assembly of microtubules and decreases the rate of depolymerization [9,10,24]. Additionally, Taxol is known as a polymerization promoter because of its stabilizing effect on microtubules’ growth.
While both Tau and Taxol showed enhancing effects on the polymerization of neuronal microtubules in vitro, they showed different effects on the polymerization of MCF7 microtubules in vitro in our current study. Tau protein consists of three domains; the C-terminal domain, which is positively charged, binds to the beta tubulin of microtubules and promotes the assembly of neuronal MTs [30,31]. As the C-terminal tail of beta tubulin isotypes has been reported to carry different values of negative charge, the Tau–tubulin conformation may be affected due to different electrostatic interactions [24,32]. In addition, binding of Tau to tubulin is regulated by post-translational modifications, which may even neutralize the positive charge of Tau protein and consequently detach Tau from microtubules [30,33,34,35]. Some studies have shown a possibility that neuronal cells choose how Tau is post-translationally modified [30,36]. It is reported that the post-translational modification of Tau protein as well as the binding of Tau protein to microtubules also depends on Tau isoforms. Tau protein has six different isoforms in the human brain with distinct numbers of post-translational modification sites [12,36]. Therefore, the levels of isoforms in different sources of Tau protein may contribute in different ways, in which they undergo distinct post-translational modifications and perform their overall regulatory roles.
Referring to such ongoing research, there is also a possibility that different post-translational modifications of Tau in different cells cause different Tau–tubulin conformations and consequently alter their regulatory effect on the assembly and dynamics of microtubules; this is a subject that needs further decoding and investigation.
In addition, beta tubulin is the Taxol binding site as well [37,38]. While the M-loop is reportedly involved in drug binding, differences in some of beta tubulin’s residues have been suggested as another factor that affects drug binding [39]. Although further investigation is needed to ascertain the fine lines that shed light on the molecular interaction differences between Tau and Taxol with microtubules of different cells, the current growing evidence demonstrates that the beta tubulin specifications may play a key role in such interactions.
Our results suggest a tug-of-war interpretation of the dual effect of Tau and Taxol on MCF7 microtubules’ polymerization. As the uniqueness of the tubulin isotype distribution in MCF7 microtubules makes our in vitro study distinct from prior studies on neuronal microtubules, establishing a connection between the observed polymerization behavior and the role of tubulin isotypes is appealing and is the subject of many studies. Based on previously reported results, which have been mainly reflected in the review of Huzil et al., microtubules with different tubulin isotype distributions may respond differently to Taxol. This has been viewed as one mechanism of resistance to Taxol [40]. However, the data obtained in our study are one example which confirms that the drug resistance mechanism may not be exclusively linked to the different responses to the drug. The less successful treatment outcome with Taxol, which is a microtubule-targeted drug with the effect of enhancing the polymerization of microtubules, may be caused by other microtubule-associated proteins such as Tau protein that show distinct regulatory effects while interacting with microtubules with different compositional structures.
Collectively, extending in vitro studies leads to better understanding the fine details, which may be a step toward more comprehensive studies and achieving more effective treatment strategies.

We used MCF7 tubulin (Cytoskeleton, Denver, CO, USA, Cat. H005). For Tau protein, we used protein obtained from a bovine brain source (Cytoskeleton, Denver, CO, USA, Cat. TA01).
The major chemical compounds used were General Tubulin Buffer containing BRB80: 80 mM PIPES, pH 7.0, 0.5 mMEGTA, and 1 mM MgCl2 (Cytoskeleton, Denver, CO, USA, Cat. BST01), Guanosine triphosphate (GTP) (Cytoskeleton, Denver, CO, USA, Cat. BST06), Taxol (Cytoskeleton, Denver, CO, USA, Cat. TA01), and dimethyl sulfoxide (DMSO). The lyophilized MCF7 tubulin was resuspended in polymerization buffer (containing General Tubulin Buffer and 1.0 mM GTP). In addition, the lyophilized Taxol was resuspended in DMSO to reach a 2 mM concentration. It was then diluted with the polymerization buffer. The final concentration of Taxol in all samples was 0.2 µM.
The prepared protein can be categorized into three groups: (a) MCF7 tubulin, (b) mixture of tubulin and Tau protein, (c) mixture of tubulin, Taxol, and Tau protein.
We conducted experiments with different concentrations of MCF7 tubulin in the samples. The final concentrations of MCF7 tubulin were 1.25 mg/mL, 2 mg/mL, and 2.5 mg/mL. In each group, the final concentration of Tau protein was 10% of the final concentration of tubulin: 0.1 mg/mL, 0.2 mg/mL, and 0.25 mg/mL. The total concentration of Taxol was 0.2 µM in all samples. However, in samples with 2.5 mg/mL of tubulin, we also checked the effect of the lower concentration of Tau (0.1 mg/mL).
In our experiment, to form microtubules, proteins prepared in the three groups explained above were mixed in an Eppendorf tube and were incubated for 5 h at 37 °C. In each experiment, after incubation, multiple “samples” were constructed, as explained below, on microscope slides. Under the same experimental conditions, a couple of experiments were conducted for each of the understudy groups mentioned above. In each experiment, multiple samples of polymerized microtubes were constructed by adding 1–1.2 µL of microtubules on a microscope slide. Through this process, we had access to, and the ability to evaluate, independent samples. To transfer polymerized microtubules, we consistently used medium-sized pipette tips to minimize the possibility of microtubule breakage. Microscope slides were then covered by a clean coverslip (Tedpella, thickness No.0, 12 mm × 12 mm) and sealed. The pressure produced by the surface of the microscope slides prevented the flow of microtubules in the samples. Each sample was then observed under a microscope. To assure the randomness of the measurement and sampling, a maximum of two fields were selected in each prepared sample. The selected fields were significantly separated from one another to eliminate any possible overlapping. Additionally, the selected microtubules had no overlap with each other and were fully placed in the field of view. The number of microtubules that were in a field of view was different, but at minimum, we were able to identify 2–3 microtubules in each selected field of view.

Samples were visualized by a Nikon upright microscope (ECLIPSE-Ci-S/Ci-L) equipped with a 100X/1.25 NA oil immersion objective lens, and a 1.43–1.20 oil dark-field condenser. Samples were visualized by a Lumenera camera (Infinity HD), and the pictures and videos were captured from the field of view (115 µm × 85 µm). The recorded videos were analyzed by ImageJ (Rasband, W. S, ImageJ, National Institutes of Health, Bethesda, MD, USA). By analyzing individual microtubules, data related to the positions of microtubules’ ends were obtained from different samples, and the length of each microtubule was calculated.
To calculate the average length in each group of microtubules, histograms of the lengths were constructed from the lengths calculated from non-normalized datasets using Igor Pro 8.04. The mean and SD of each dataset were calculated after utilizing the curve fitting feature of the program. The statistics feature of the program was employed to apply the t-test. In addition, two datasets were statistically assessed by the Mann–Whitney test or a two-tailed Student t-test (GraphPad) to specifically obtain the p-value (Igor Pro does not have the feature to calculate the p-value in each dataset). In the comparison of each pair of variables, the threshold for the significance level was 0.05, and a 95% confidence interval was utilized. For the pool of non-normalized raw data, the mean +/− SD was calculated by Microsoft Excel (Excel 365). Knowing the size of the samples (n = number of microtubules analyzed) and the mean (+/−SD), Student’s t-test (GraphPad) was employed for the statistical analysis.

M.S.F. designed and supervised the research project, performed experiments, analyzed data, and prepared the manuscript. The contribution of V.J.C. included analyzing data and contributing to drafting the manuscript. All authors have read and agreed to the published version of the manuscript.

This work was supported by the University Research Council and a research fund from the Physics Department of Seton Hall University. 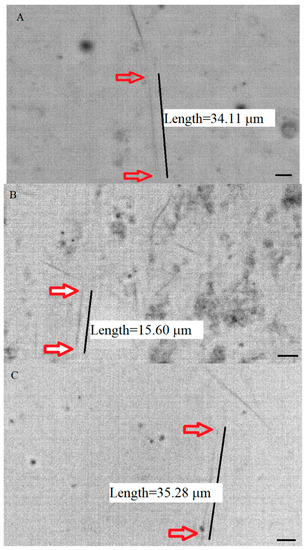