Molecular Hydrogen Neuroprotection in Post-Ischemic Neurodegeneration in the Form of Alzheimer’s Disease Proteinopathy: Underlying Mechanisms and Potential for Clinical Implementation—Fantasy or Reality?
Next Article in Special Issue

:
Inherited retinal diseases (IRD) are a group of heterogeneous disorders, most of which lead to blindness with limited therapeutic options. Pathogenic variants in RBP4, coding for a major blood carrier of retinol, retinol-binding protein 4, are responsible for a peculiar form of IRD. The aim of this study was to investigate if retinal function of an RBP4-related IRD patient can be improved by retinol administration. Our patient presented a peculiar white-dot retinopathy, reminiscent of vitamin A deficient retinopathy. Using a customized next generation sequencing (NGS) IRD panel we discovered a novel loss-of-function homozygous pathogenic variant in RBP4: c.255G >A, p.(Trp85*). Western blotting revealed the absence of RBP4 protein in the patient’s serum. Blood retinol levels were undetectable. The patient was put on a high-dose oral retinol regimen (50,000 UI twice a week). Subjective symptoms and retinal function markedly and sustainably improved at 5-months and 1-year follow-up. Here we show that this novel IRD case can be treated by oral retinol administration.
Keywords:
inherited retinal degeneration; fundus albipunctatus; retinol-binding protein; RBP4; retinol treatment

Inherited retinal diseases are a heterogeneous group of disorders, the most common of which—retinitis pigmentosa—progresses towards blindness with limited therapeutic options. Some rare forms of IRD, linked with inborn defects of small molecule metabolism can benefit from metabolic and/or dietary treatment [1,2]. For instance, vitamin A and E intake improves vision in patients with abetalipoproteinemia (OMIM# 200100), a hereditary defect of fat-soluble vitamin absorption and transport [3]. Dietary arginine restriction and vitamin B6 intake can reduce blood ornithine level and slow retinal degeneration in patients with gyrate atrophy (OMIM#258870) [4,5]. Low phytanic acid diet may slow retinal degeneration progression rates in adult Refsum disease (OMIM#266500) [6,7].
Retinol-binding protein 4 (RBP4, Uniprot#Q5VY30) is a major blood transporter of retinol from hepatocyte to target organs. Pathogenic variants in RBP4 are associated with both ocular developmental abnormalities and retinal degeneration (OMIM#615147). Ocular developmental abnormalities range from a mild iris coloboma to micro- and anophthalmia. Retinal degeneration consists of a rod–cone dystrophy, also known as retinitis pigmentosa.
We report here that high-dose vitamin A is able to improve visual function in a new case of RBP4-associated retinopathy.

The family consisted of unaffected first-degree-cousin parents of Algerian descent and two unaffected sisters (Figure 2A). Targeted NGS identified a novel homozygous nonsense variant c.255G >A, p.(Trp85*) in RBP4 which co-segregated with disease in this family. This variant was classified as pathogenic Ia (PVS1, PP1-S, PM2) in accordance with ACMG standards [8]. Western blot analysis revealed the absence of the RBP4 protein band in the serum of the patient (Figure 2B). Blood retinol level was also undetectable.

After discussion with the patient and his parents and their informed consent, high-dose oral vitamin A was initiated with retinol palmitate, 50,000 UI twice a week. Liver function was monitored. Five months after initiation of the treatment, the patient reported a significant subjective night vision improvement and a better tolerance of light-to-dark transitions. There was an improvement in FST at this time point (+25% in RE and 40% in LE, respectively) sustained at 1-year follow-up (Figure 3 and Figure S3 in Supplementary Data), while visual acuity, ERG, and retinal imaging (more specifically, white dots, ONL and EZ aspects) remained unchanged. We also observed a marked visual field improvement: III1e and II1e targets became perceived by the patient (Figure S1 in Supplementary Data). There were no signs of general retinol toxicity and liver function remained normal.

Blood samples from the index case and from his parents were collected for genetic research and genomic DNA was extracted as previously reported [44]. These DNA samples were stored and obtained from the NeuroSensCol DNA bank, for research in neuroscience (PI: JA Sahel, co-PI I Audo, partner with CHNO des Quinze-Vingts, Inserm and CNRS, certified NFS96-900). Targeted next generation sequencing (NGS) was performed in collaboration with an external company (IntegraGen, Evry, France) [45]. The RBP4 (MIM#180250) variant selected after NGS was validated in the index case and relatives by Sanger sequencing (refseq: NM_001323517.1, primer sequences and conditions available on demand).

Research procedures adhered to the tenets of the Declaration of Helsinki and were approved by the local Ethics Committee (CPP, Ile de France V, Project number 06693, N◦EUDRACT 2006-A00347-44, 11 December 2006).

Prior to testing, written informed consent was obtained from the parents and participant who was under 18. No compensation or incentive was offered to the subject to participate in the study.

All data are contained within the article or Supplementary Materials.

The authors thank the family in the study and the clinical staff of National Rare Disease Center REFERET and INSERM-DGOS CIC 1423 for collecting phenotypic data. We are thankful to Robert Duvoisin for his English revisions. 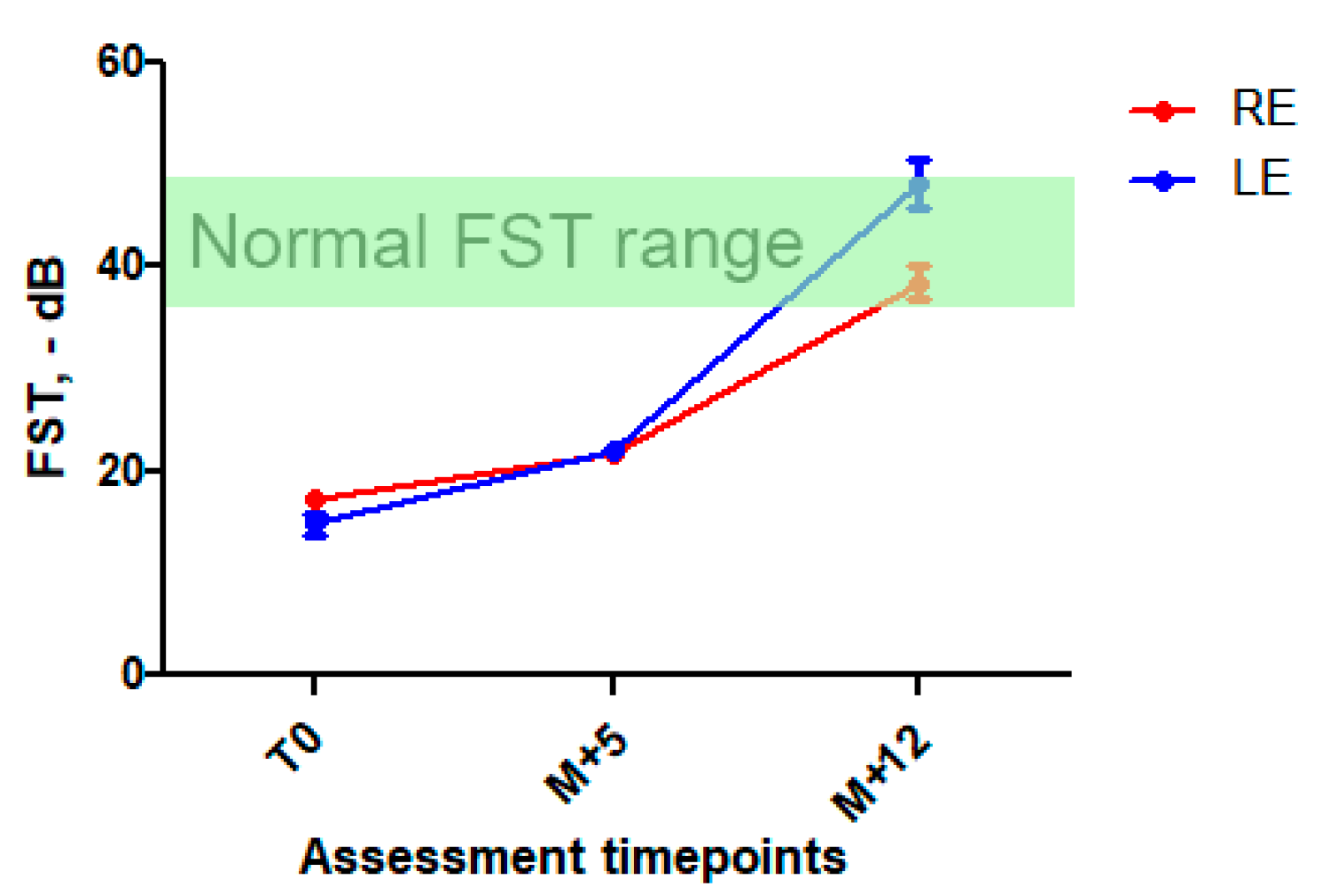