Galectin-4 (Gal4) has been suggested to function as a tumor suppressor in colorectal cancer (CRC). In order to systematically explore its function in CRC, we established a CRC cell line where Gal4 expression can be regulated via the doxycycline (dox)-inducible expression of a single copy wildtype LGALS4 transgene generated by recombinase-mediated cassette exchange (RMCE). Using this model and applying in-depth proteomic and phosphoproteomic analyses, we systematically screened for intracellular changes induced by Gal4 expression. Overall, 3083 cellular proteins and 2071 phosphosites were identified and quantified, of which 1603 could be matched and normalized to their protein expression levels. A bioinformatic analysis revealed that most of the regulated proteins and phosphosites can be localized in the nucleus and are categorized as nucleic acid-binding proteins. The top candidates whose expression was modulated by Gal4 are PURB, MAPKAPK3, BTF3 and BCAR1, while the prime candidates with altered phosphorylation included ZBTB7A, FOXK1, PURB and CK2beta. In order to validate the (phospho)proteomic data, we confirmed these candidates by a radiometric metabolic-labelling and immunoprecipitation strategy. All candidates exert functions in the transcriptional or translational control, indicating that Gal4 might be involved in these processes by affecting the expression or activity of these proteins. View Full-Text
Keywords: Galectin 4; proteomics; phosphoproteomics; colorectal cancer; Tet-On system Galectin 4; proteomics; phosphoproteomics; colorectal cancer; Tet-On system
►▼ Show Figures 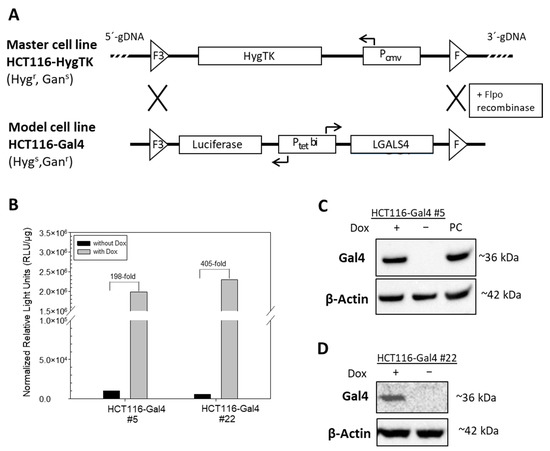