Effects of Rare Phytocannabinoids on the Endocannabinoid System of Human Keratinocytes

The decriminalization and legalization of cannabis has paved the way for investigations into the potential of the use of phytocannabinoids (pCBs) as natural therapeutics for the treatment of human diseases. This growing interest has recently focused on rare (less abundant) pCBs that are non-psychotropic compounds, such as cannabigerol (CBG), cannabichromene (CBC), Δ9-tetrahydrocannabivarin (THCV) and cannabigerolic acid (CBGA). Notably, pCBs can act via the endocannabinoid system (ECS), which is involved in the regulation of key pathophysiological processes, and also in the skin. In this study, we used human keratinocytes (HaCaT cells) as an in vitro model that expresses all major ECS elements in order to systematically investigate the effects of CBG, CBC, THCV and CBGA. To this end, we analyzed the gene and protein expression of ECS components (receptors: CB1, CB2, GPR55, TRPV1 and PPARα/γ/δ; enzymes: NAPE-PLD, FAAH, DAGLα/β and MAGL) using qRT-PCR and Western blotting, along with assessments of their functionality using radioligand binding and activity assays. In addition, we quantified the content of endocannabinoid(-like) compounds (AEA, 2-AG, PEA, etc.) using UHPLC-MS/MS. Our results demonstrated that rare pCBs modulate the gene and protein expression of distinct ECS elements differently, as well as the content of endocannabinoid(-like) compounds. Notably, they all increased CB1/2 binding, TRPV1 channel stimulation and FAAH and MAGL catalytic activity. These unprecedented observations should be considered when exploring the therapeutic potential of cannabis extracts for the treatment of human skin diseases. View Full-Text
Keywords: endocannabinoids; enzymes; keratinocytes; phytocannabinoids; receptors; skin endocannabinoids; enzymes; keratinocytes; phytocannabinoids; receptors; skin
►▼ Show Figures 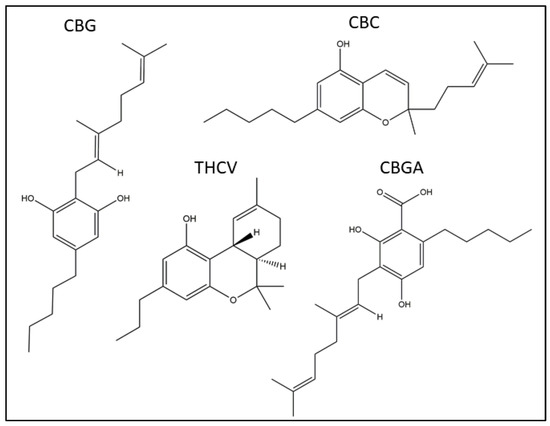