Overview of the Importance of Biotics in Gut Barrier Integrity

The importance of diet in health has long been recognized worldwide. The Chinese ancient document, the Shurai, written in 800 BC, describes medical doctors who specialized in foods, and the ancient Greek medical doctor, Hippocrates (460–370 BC), described the importance of food in medicine. After the scientific approach was established, the relationship between health and intestinal microbes was studied by Mechnikov, a doctor who, in 1907, proposed that intestinal microbes lower the pH of the intestinal environment and prevent intestinal decay and aging [1]. These microbes were later classified as probiotics. In 1998, Gibson proposed that some substances promote the growth of preferable intestinal bacteria and termed them prebiotics [2]. Fructooligosaccharides [3], galactooligosaccharides [4], beta-glucan [5], polyunsaturated fatty acids [6], catechin [7,8,9], anthocyanins [10], pectin [11], alginate [3], and enzymes [12,13,14] have been proposed as prebiotics.
Sphingolipids are lipids composed of a sphingoid base, an amide-linked fatty acid moiety, and other sensory bases. Since the discovery by Thudichum in 1874, sphingolipids have attracted attention because of their relevance to several neural disorders, such as Gaucher disease, Niemann–Pick, Fabry, Tay–Sachs, Krabbe, and Sandohoff diseases in the 1930s and their chemical structures were determined [15]. In the late 1980s, sphingolipids emerged as anti-cancer agents. For example, the degraded products of sphingolipids, including sphingosine and lysosphingolipids, inhibit protein kinase and have anti-tumor effects [16] and ceramide formed through the subcellular localization regulates stress responses [17].
Glucosylceramide is one of the sphingolipids composed of a sugar moiety and ceramide. In glucosylceramides from koji, Aspergillus oryzae [18], A. luchuensis [19,20,21], and Cryptococcus neoformans [22], a simple β-glucose is covalently attached to the 1-hydroxyl base of ceramide. Glucosylceramide has been detected in several species, including crop plants and fungi, as well as fermented foods [23,24,25]. Glucosylceramide prevents aberrant crypt foci [26,27,28,29,30], improves lipid metabolism [31] and skin barrier function [32,33]. To explain the underlying mechanism, glucosylceramide was proposed to prevent the production of inflammatory cytokines in the small intestine [34]. Glucosylceramide-derived sphingoid bases induce apoptosis [35,36], whereas feeding with glucosylceramide increases intestinal Blautia coccoides, Bacteroides sartorii, and Hathewaya histolytica levels in vivo [23]. Most food components alter their chemical forms in the small intestine through the action of enzymes. However, the majority of the chemical form of glucosylceramide is not altered by enzymes in the small intestine [23]. Indeed, the enzymatic degradation and absorption of glucosylceramide are limited [37,38]. Several intestinal microbes have been shown to degrade glucosylceramide, however, some glucosylceramide remains in its chemical form throughout the colon [39].
Bile acids are synthesized in a glycine- or taurine-conjugated form in the liver, pooled in the bladder, secreted into the duodenum, and degraded into non-ester forms by intestinal microbes [40]. Bile acids facilitate the saponification and absorption of lipids in the small intestine. However, they also disrupt the membrane structure of intestinal microbes. In particular, when cholic acid is dehydroxylated at the 7α-position by intestinal microbes and becomes secondary cholic acid, namely deoxycholic acid, these products exert strong antimicrobial activity and affect intestinal microbial flora in vivo [41]. Secondary bile acids also induce colon cancer [42] and are associated with nonalcoholic steatohepatitis [43].
To gain insight into the role of glucosylceramide in vivo, glucosylceramide was added to intestinal microbes in vitro and cultured anaerobically, and its effects on intestinal microbes and metabolites were analyzed. We found that glucosylceramide alters the metabolism of and production of lactic acid by Blautia coccoides, increases the ratio of Gram-positive bacteria and endows tolerance to deoxycholic acid in certain bacteria such as Lactobacillus delbrueckii, Streptococcus mutans, Clostridium butyricum, Blautia coccoides and Enterococcus faecalis. These novel findings provide information on the mechanism of action of glucosylceramide on intestinal microbes in vivo.

2.4. Coculture of Glucosylceramide and Microbes

Microbes were inoculated into appropriate media and incubated at 37 °C for total 48 h. Cell-mock-1 was incubated as a mixture of 15 bacteria. Other bacteria were incubated individually. Considering that the deoxycholic acid concentration in the colon is 0.046–0.21 mM [40], the final concentrations of deoxycholic acid in the broths were adjusted to 0–2.0 mM. Deoxycholic acid (2 mM in distilled water) was diluted to the appropriate concentration, according to the experimental conditions. Using a syringe, 100 μL of pre-configured deoxycholic acid (24 h from the start of the culture), 25 μL of the glucosylceramide solution (20 μg/mL dissolved in ethanol or DMSO), vitamin solution (10 μL/mL) and a certain volume of the bacterial culture broth (OD600 = 0.1) were added individually to the sterilized broth. The total volume of the liquid in the vial was 5 mL.

The cultured broth was freeze-dried, and water-soluble metabolites were extracted and analyzed using gas chromatography with flame ionization detection (GC-FID), as previously described [45].

Cultured broth (5 mL) was collected and frozen at −27 °C. Next-generation sequencing (NGS) analysis was performed using the Techno Suruga Laboratory (Shimizu, Japan). Briefly, bacterial DNA was extracted using the MORA-EXTRACT kit (Kyokuto Pharmaceutical, Tokyo, Japan) and FastPrep-24 5G (MP Biomedicals, Irvine, CA, USA). Conditions for PCR amplification of 16S rDNA including primers are described by Takahashi et al. [47]. The PCR products were quantified, and deletion of primer sequences and determination of the sequences was performed using the MiSeq system (Illumina, San Diego, CA, USA) and MiSeq Reagent Kit v3 (600 cycles) (Illumina, San Diego, CA, USA). Fastq-join [48] was used to join pair-ends, and the FASTX-Toolkit [49] was used to filter sequences with more than 99% quality values (>20). QIIME ver. 1.8.0 [50] was used for the deletion of chimeric sequences detected by Usearch6.1.544_i86. The RDP MultiClassifier ver. 2.11 was used to search for homologous sequences with a confidence of more than 0.8.

IBM SPSS Statistics (ver. 23.0; IBM Inc., Armonk, NY, USA) and SIMCA-P+, ver. 13.0 (Umetrics, Umeå, Sweden) were used for statistical analyses. Normality of the data was verified using the Shapiro–Wilk test. Significance of differences between the means was verified using a one-sided unpaired Student’s t-test. Hierarchical clustering and principal component analysis were used to group the operational taxonomic units (OTUs) of the NGS analyses. Hierarchical clustering, principal component analysis, and partial least squares-discriminant analysis (PLS-DA) were used to analyze the data obtained by GC-mass spectrometry (MS). Hierarchical clustering was performed using MetaboAnalyst ver. 5.0 (https://www.metaboanalyst.ca/home.xhtml, accessed on 5 May 2022) [51]. The OTU counts of the 16 bacterial species were divided by the total OTU count. IC50 values were calculated using the ImageJ software. Curve fitting (four-variable logistic curve) with the ImageJ software was used to create approximate dose-response curve equations. The concentration of deoxycholic acid at a 50% reduction in bacterial concentration was considered the semi-inhibitory concentration of the bacteria. Each experiment was repeated three times, and the average value was calculated.

As most glucosylceramide reaches the colon without enzymatic degradation, glucosylceramide was directly added to the in vitro culture of intestinal microbes and analyzed as a model large intestine. The effect of culturing Blautia coccoides, a major intestinal microbe involved in the decrease in visceral fat accumulation [52], with purified glucosylceramide was analyzed in vitro. To determine the effect of glucosylceramide, metabolites of B. coccoides were incubated with or without the addition of glucosylceramide. Considering that glucosylceramide is contained in crops and fermented foods at a concentration of 0.94–2.2 mg/g [19,24,25,53], the concentration was set at a final concentration of 20 μg/mL, since it can be hypothesized that 25 g of crops or fermented foods reach the large intestine, which has an average capacity of 1065 cc [54] (corresponds to 21 μg/mL in the large intestine if the food contains 10 % water). The cocultured metabolites were analyzed and compared (n = 8, Supplementary Table S1). Consequently, 32 peaks were identified (Table 1). Based on these data, PLS-DA was performed and corrected using an internal standard approach (Figure 1A), which revealed that the control and glucosylceramide groups were separated (Figure 1C). The permutation test results demonstrated that this was not an overfitting model (Figure 1D). Important components that led to the separation of the two groups, as indicated by a VIP score greater than 1.0, were chosen. Substances, such as citric acid, threonine, lysine, lactic acid, valine, proline, and isoleucine, contributed to the separation of the two groups (Table 2). A one-sided unpaired Student’s t-test revealed a substantial increase in citric acid content in the glucosylceramide group compared with that of the control group (p < 0.01). To further elucidate the effect of glucosylceramide on the physiology of B. coccoides, the short-chain fatty acids produced by B. coccoides were analyzed. Lactic acid levels were significantly increased in the broth supplemented with glucosylceramide compared with that of the control broth (Figure 1E). Taken together, these results indicate that glucosylceramide addition alters the metabolism of B. coccoides.

These results clearly indicate that glucosylceramide alters the metabolism of the intestinal microbes in this system. Next, to determine which bacteria were increased in response to glucosylceramide, NGS analysis was performed after incubation of model intestinal microbes (cell-mock-1), consisting of known ratios of bacteria that reside within human beings with glucosylceramide (Supplementary Table S2). Cell-mock-1 is a composite of bacteria Bacillus subtilis, Bifidobacterium pseudocatenulatum, Clostridium butyricum, Corynebacterium striatum, Cutibacterium acnes subsp. acnes, Lactobacillus delbrueckii subsp. delbrueckii, Streptococcus mutans, Staphylococcus epidermidis, Acinetobacter radioresistens, Bacteroides uniformis, Clostridium clostridioforme, Comamonas terrigena, Escherichia coli, Parabacteroides distasonis, and Pseudomonas putida. These bacteria were incubated in YCFA medium as a mixed state anaerobically with or without glucosylceramide. From the incubated culture, genomes were extracted and analyzed using NGS. As a result, relative OTU counts of Clostridium sensu stricto and Escherichia/Shigella were dominant (Figure 2A), maybe because of the anaerobic condition. These dominant bacteria were not significantly affected by glucosylceramide. In contrast, relative OTU counts of minor Gram-positive bacteria, such as Lactobacillus delbrueckii (Figure 2B), Staphylococcus epidermidis (Figure 2C), Streptococcus mutans (Figure 2D), Corynebacterium striatum (Figure 2E), and Clostridium butyricum (Figure 2F), were significantly increased in glucosylceramide-treated cultures compared with those in control cultures (p < 0.05). In contrast, the Gram-negative bacterium, Acinetobacter radioresistens (Figure 2G), decreased in glucosylceramide-treated cultures compared with that in control cultures (p < 0.05).

Part of this research was financially supported by JSPS KAKENHI 20K05809.

Inquiries can be directed to the corresponding author.

All authors have provided consent. This research was part of the dissertation submitted by the first author in partial fulfillment of the Ph.D. degree. Tomoya Sato, Yuka Kitajima, Mayu Nagatome and Moemi Mansho at Graduate School of Health Sciences, Saga University contributed to the experiments. We would like to acknowledge Satoru Fukiya at Hokkaido University for the manipulation of anaerobic cultures. 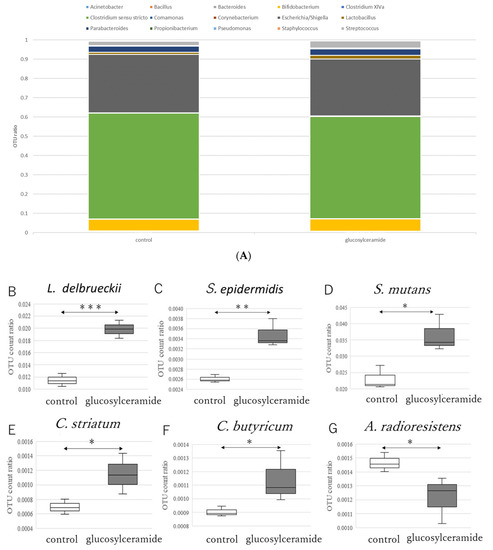 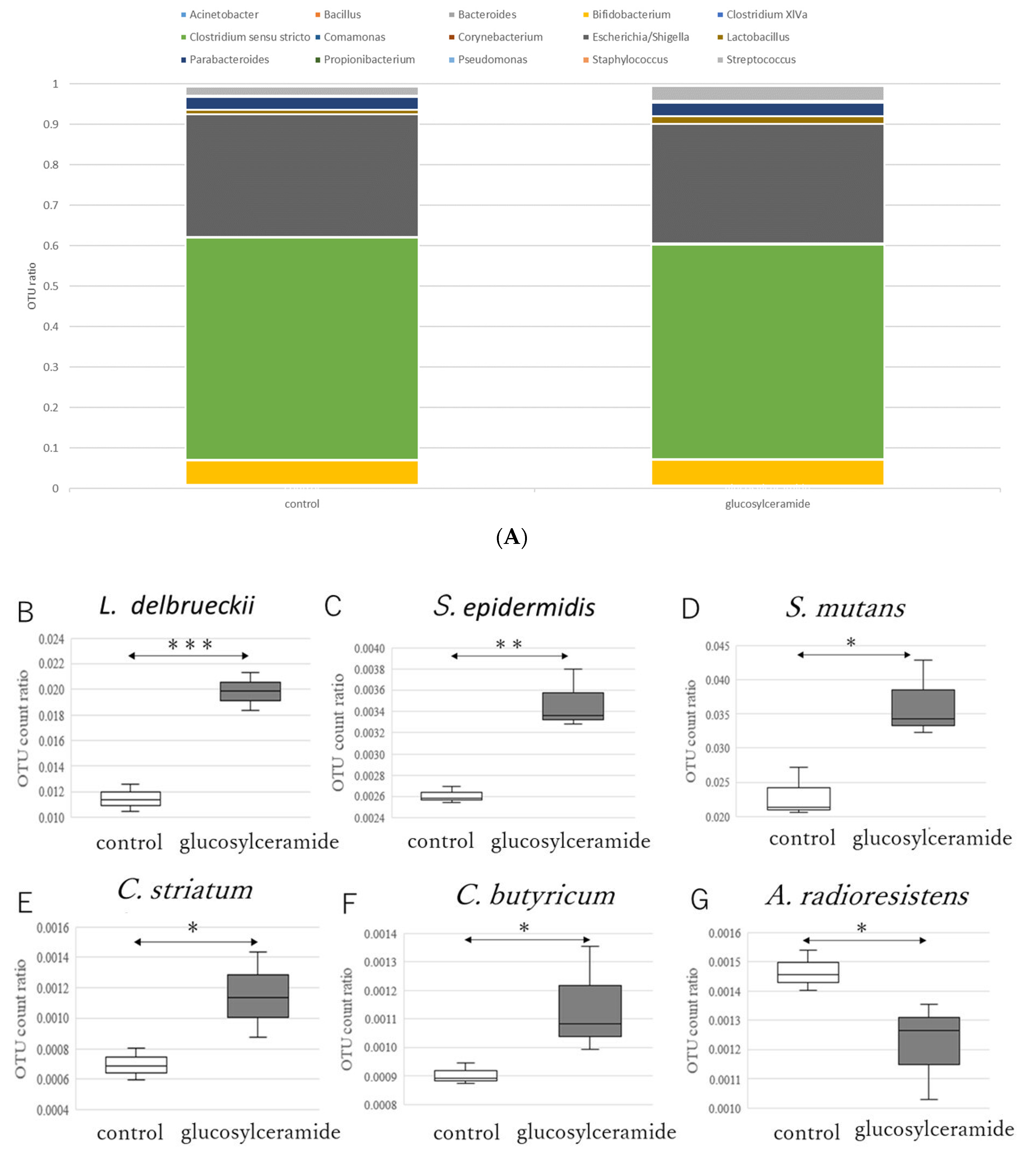 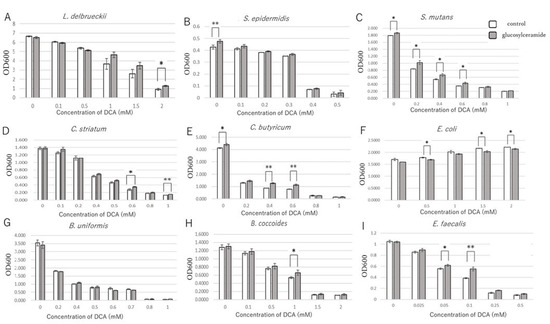 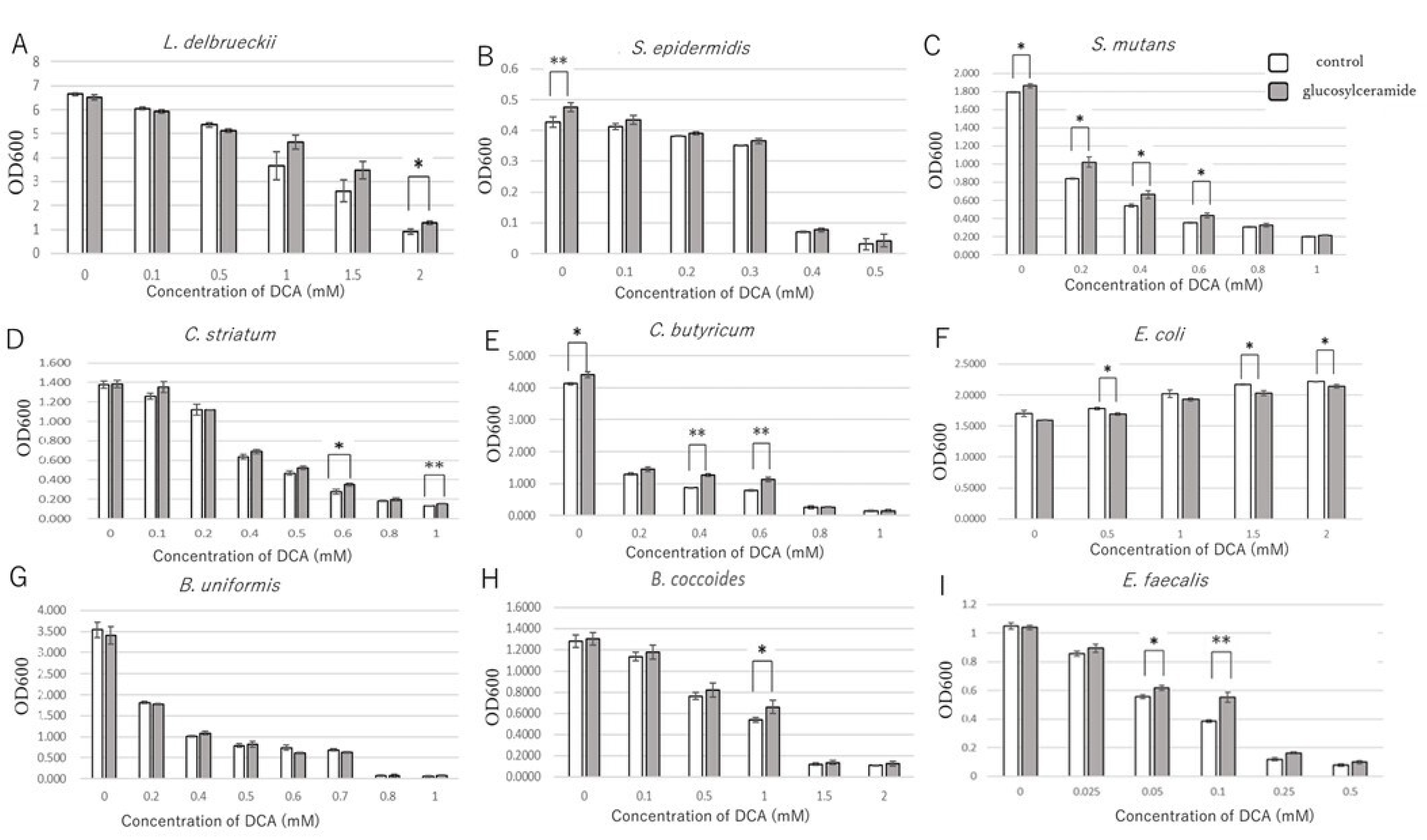