Although it is not yet universally accepted that all neurodegenerative diseases (NDs) are prion disorders, there is little disagreement that Alzheimer’s disease (AD), Parkinson’s disease, frontotemporal dementia (FTD), and other NDs are a consequence of protein misfolding, aggregation, and spread. This widely accepted perspective arose from the prion hypothesis, which resulted from investigations on scrapie, a common transmissible disease of sheep and goats. The prion hypothesis argued that the causative infectious agent of scrapie was a novel proteinaceous pathogen devoid of functional nucleic acids and distinct from viruses, viroids, and bacteria. At the time, it seemed impossible that an infectious agent like the one causing scrapie could replicate and exist as diverse microbiological strains without nucleic acids. However, aggregates of a misfolded host-encoded protein, designated the prion protein (PrP), were shown to be the cause of scrapie as well as Creutzfeldt–Jakob disease (CJD) and Gerstmann–Sträussler–Scheinker syndrome (GSS), which are similar NDs in humans. This review discusses historical research on diseases caused by PrP misfolding, emphasizing principles of pathogenesis that were later found to be core features of other NDs. For example, the discovery that familial prion diseases can be caused by mutations in PrP was important for understanding prion replication and disease susceptibility not only for rare PrP diseases but also for far more common NDs involving other proteins. We compare diseases caused by misfolding and aggregation of APP-derived Aβ peptides, tau, and α-synuclein with PrP prion disorders and argue for the classification of NDs caused by misfolding of these proteins as prion diseases. Deciphering the molecular pathogenesis of NDs as prion-mediated has provided new approaches for finding therapies for these intractable, invariably fatal disorders and has revolutionized the field. View Full-Text
Keywords: Aβ; α-synuclein; Alzheimer’s disease; neurodegenerative disease; prions; PrP; tau Aβ; α-synuclein; Alzheimer’s disease; neurodegenerative disease; prions; PrP; tau
►▼ Show Figures 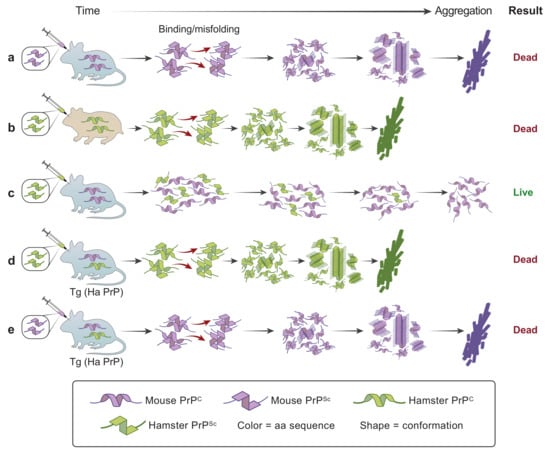