pCTX-M3—Structure, Function, and Evolution of a Multi-Resistance Conjugative Plasmid of a Broad Recipient Range
Previous Article in Journal

In bacteria, selenocysteine (Sec) is incorporated into proteins via the recoding of a particular codon, the UGA stop codon in most cases. Sec-tRNASec is delivered to the ribosome by the Sec-dedicated elongation factor SelB that also recognizes a Sec-insertion sequence element following the codon on the mRNA. Since the excess of SelB may lead to sequestration of Sec-tRNASec under selenium deficiency or oxidative stress, the expression levels of SelB and tRNASec should be regulated. In this bioinformatic study, I analyzed the Rhizobiales SelB species because they were annotated to have a non-canonical C-terminal extension. I found that the open reading frame (ORF) of diverse Alphaproteobacteria selB genes includes an entire tRNASec sequence (selC) and overlaps with the start codon of the downstream ORF. A remnant tRNASec sequence was found in the Sinorhizobium melilotiselB genes whose products have a shorter C-terminal extension. Similar overlapping traits were found in Gammaproteobacteria and Nitrospirae. I hypothesized that once the tRNASec moiety is folded and processed, the expression of the full-length SelB may be repressed. This is the first report on a nested tRNA gene inside a protein ORF in bacteria.
Keywords: genetic code; selenocysteine; non-coding RNA genetic code; selenocysteine; non-coding RNA

Selenocysteine is the 21st amino acid used in diverse bacteria, archaea, and eukaryotes for expressing selenoproteins [1]. In this work, I focus on the bacterial system. Unlike most of the canonical amino acids, Sec is synthesized on tRNASec molecules and delivered to a growing polypeptide in the ribosome by the dedicated elongation factor SelB. First, tRNASec is charged with serine by seryl-tRNA synthetase. Ser-tRNASec is then converted to Sec-tRNASec by selenocysteine synthase (SelA) using selenophosphate synthesized by SelD [2]. SelB binds to a Sec-tRNASec and a Sec-insertion sequence (SECIS) element on mRNA to mediate Sec-insertion (see Figure 1A) [3]. The SelB domains I/II/III are mainly responsible for the GTPase activity, while the domain IV composed of four winged helix domains (WHDs) is responsible for the SECIS recognition (Figure 1A) [3,4]. In most of the Sec-utilizing bacteria, the UGA stop codon directly followed by a SECIS element is recoded in a competition with release factor 2 [5], while some bacteria use the UAG stop codon or the UGC/UGU cysteine codons together with anticodon variants of tRNASec [6].
The primary role of Sec in common bacteria such as Alphaproteobacteria, Betaproteobacteria, and Gammaproteobacteria species is to express Sec-containing formate dehydrogenases (FDHs) [7]. Formate metabolism is important for nitrogen fixation and formate-dependent respiration in Rhizobiales [8,9]. It is known that a megaplasmid pSymA of Sinorhizobium (Rhizobium) meliloti encode a fdoGHI (for FDH-O) and selABCD gene cluster [10,11]. In our previous study on non-canonical SelB sequences [12], it was found that Rhizobiales SelB sequences in the public databases are annotated to have a C-terminal extension compared to other bacterial SelB sequences (Figure 1A) [13]. In the present study, a careful analysis of these Rhizobiales SelB sequences was performed to reveal the possible reason.

2.1. tRNASec is Encoded Inside the selB Gene in Diverse Alphaproteobacteria

As shown in Figure 1B, it was found that an entire tRNASec sequence is nested inside the ORF of the selB gene of an Rhizobiales bacterium Azorhizobium caulinodans. The stop codon of the selB gene overlaps with the start codon of the next ORF. Thus, the C-terminal extension results from the translation of the tRNASec sequence into amino acids. Since overlapping of stop and start codons is common for polycistronic mRNAs and may support translation re-initiation [14], the annotation of the ORFs may be true. Is this common in Rhizobiales and in other orders of Alphaproteobacteria? I performed a bioinformatic analysis of selB and selC genes. In Figure 2, the distribution of the selB-selC overlapping trait is overlaid on the phylogenetic tree of SelB sequences analyzed in this study. In summary, I found several types of overlapping genes and the penetrance of the overlapping trait even outside the Alphaproteobacteria class. In Alphaproteobacteria, diverse species of Rhizobiales and a few groups of Rhodobacterales, Rhodospirillales, and Caulobacterales have a selC nested inside the selB gene (Figure 3). In many cases, the stop codon of the selB ORF overlaps with the start codon of the next ORF. In most cases, the selC-encoded tRNASec sequence is 96 nucleotide residues in length or 93 residues (due to the lack of the CCA tail in the selC gene), which may facilitate the maintenance of the reading frame. Some species have lost the overlap (Figure 3); Methylopila species have a new stop codon before the selC sequence, while some Ensifer species have a long spacer between the selB and selC genes. These results clearly suggested that the overlapping trait is highly conserved but is not essential.

2.2. tRNASec Remnant is Encoded inside the selB Gene in pSymA

2.3. tRNASec Partially Overlapping with the selB Gene in Gammaproteobacteria

2.4. Reversed tRNASec Overlapping with the selB Gene in Gammaproteobacteria

I found that the SelB sequences of Shewanella and a few Ferrimonas species have a C-terminal extension (Figure 2). Interestingly, it was revealed that the C-terminal extension results from the translation of the complementary sequence the tRNASec sequence into amino acids (Figure 5B). The selC promoter (probably TTGATTcaggtttacacattttcTACTATC for Shewanella oneidensis MR-1) may exist around the stop codon of the selB gene (underlined). It is likely that the transcripts of the selB gene and the selC gene might function as the cis-encoded antisense RNAs to each other [15]. In contrast, Photobacterium damselae, another Gammaproteobacteria species, has a very similar selB-selC locus separated by a stop codon. The tRNASec sequences of these Gammaproteobacteria resemble alphaproteobacterial tRNASec sequences, indicating horizontal gene transfer.

2.6. A New Mechanism of Maintaining Homeostasis between selB and Sec-tRNASec?

Figure 7 shows a proposed model of the translation regulation by the nested tRNA moiety. Once the tRNA moiety folded into a tertiary structure, the exact 5′ end and the 3′ trailer may be cleaved by RNases [16,17,18]. This tRNA processing will generate a nonstop mRNA for SelB and a leader-less mRNA for ORF1 or ORF2, leading to the repression of the expression of SelB and ORF1/2 proteins (Figure 7). In other words, the expressions of SelB and tRNASec molecules are alternatives. As discussed later, a similar mechanism was hypothesized for a mitochondrial tRNA gene nested in a protein gene [17]. Because the excess of SelB over Sec-tRNASec may lead to sequestration of Sec-tRNASec molecules due to the extraordinary high affinity [19,20], the SelB expression level should be maintained to be low but enough for mediating the UGA-recoding. It is not clear whether or how this hypothetical mechanism would be regulated under selenium deficiency.

To the best of my knowledge, this is the first report of an entire tRNA sequence nested in the protein coding region of mRNA in bacteria, while tRNA-like structures of varying sizes and shapes have been found in the coding regions or untranslated regions of mRNAs in diverse organisms and viruses [21,22,23]. It is known that tRNA genes are partially or fully integrated within protein genes or other tRNA genes in the compact mitochondrial genome of animals [17,24]. For example, the 60-nt tRNALys is fully integrated within the coding region of the cox1 gene in direct orientation in the Armadillidium vulgare mitochondrial genome [17]. Since Rhizobiales bacteria have a large and redundant genome, it is unlikely that they have been pressured to evolve a compact system. Rather, they may have survived selenium deficiency in the rhizosphere or inside the host plants. Plants lack the eukaryotic Sec-inserting machinery. It is also known that the gut symbionts of higher termites feeding on dead plant material often lack the Sec-insertion machinery [25] or have a putative backup system for the Sec-insertion machinery [6]. It is noteworthy that in a lineage of such symbiotic bacteria, the tRNASec sequence ends at the -2 position of the start codon of the selA in the selCAB operon (3300006045.a:Ga0082212_10006574) [6]. Thus, expression level control of the SelA and SelB might be important in these symbiotic bacteria. The alternative expression of SelB and tRNASec can be deemed as a new approach different from the SelB autoregulation system of Escherichia coli [26] for controlling the SelB expression level in bacteria. Future studies with wet-lab experiments may elucidate these mechanisms by altering the sequences such that the protein sequence would be changed without affecting the tRNA function.

The author thanks Anastasia Sevostyanova and Dieter Söll (Yale University) for valuable discussions and Daniel Schachtman and Markus Goeker for providing genomic data to NCBI and IMG. 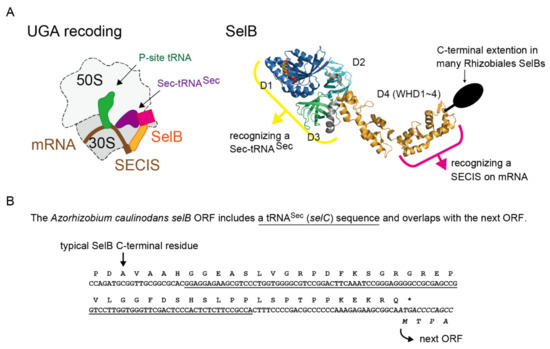 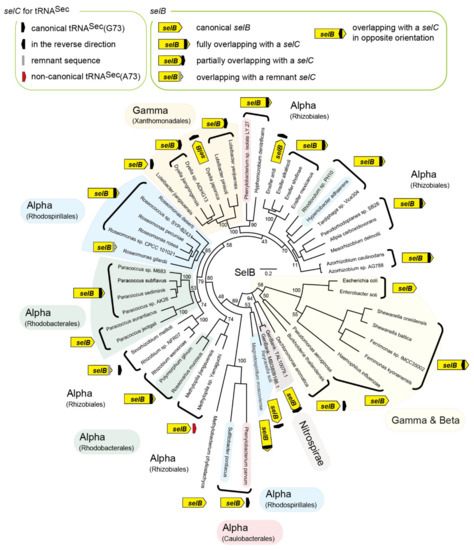 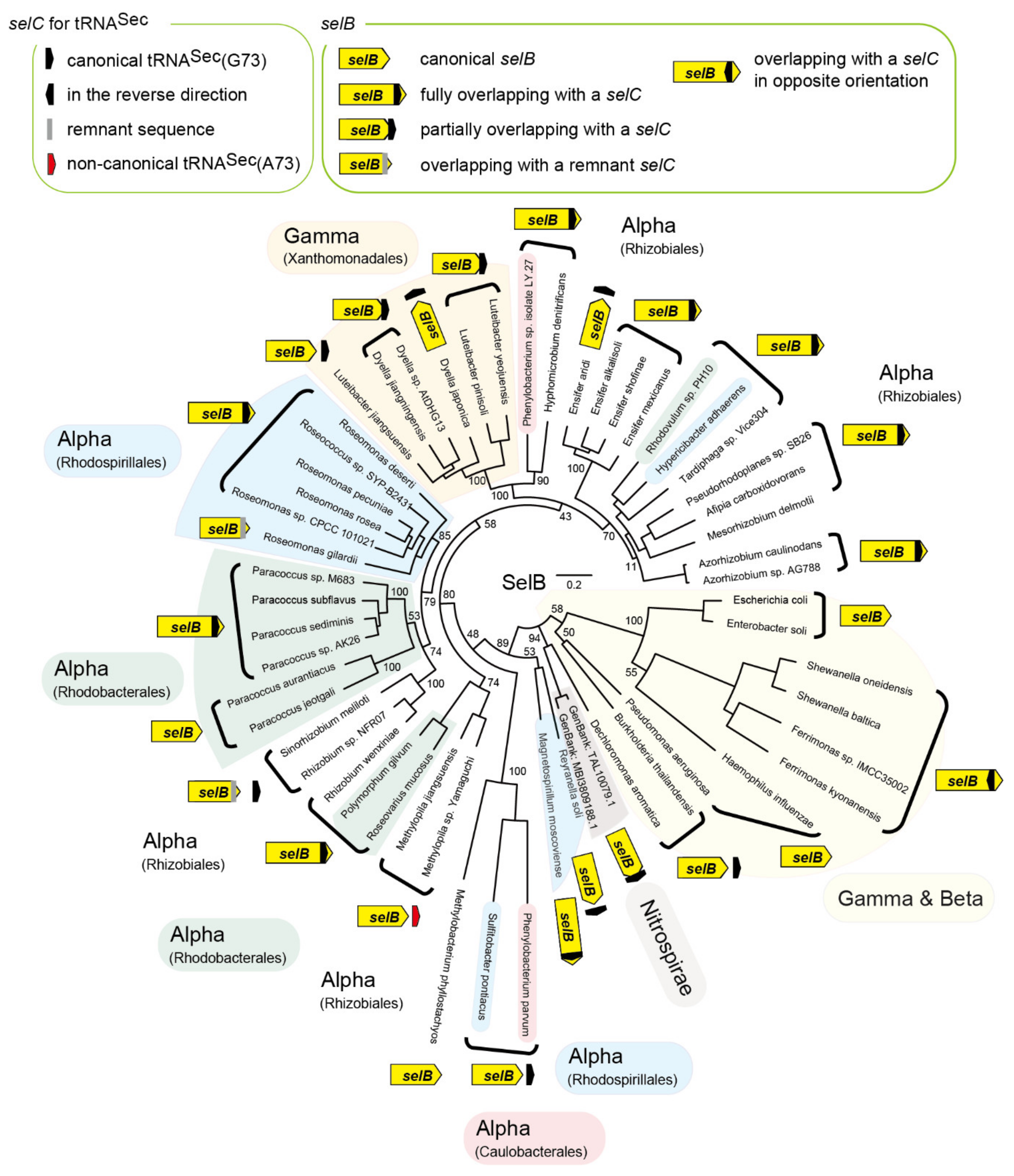 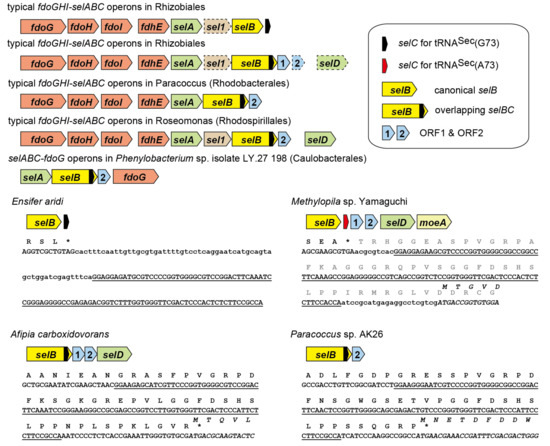 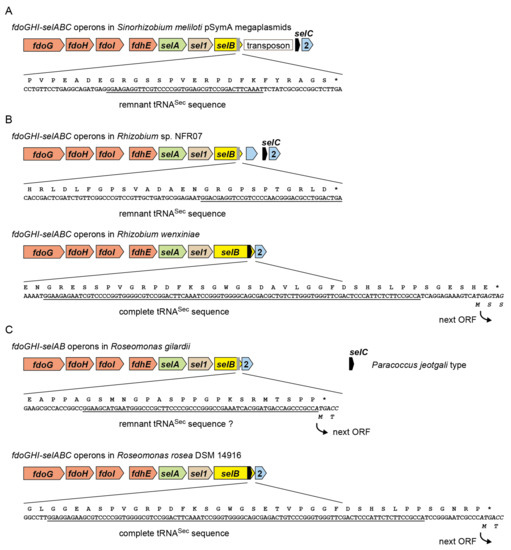 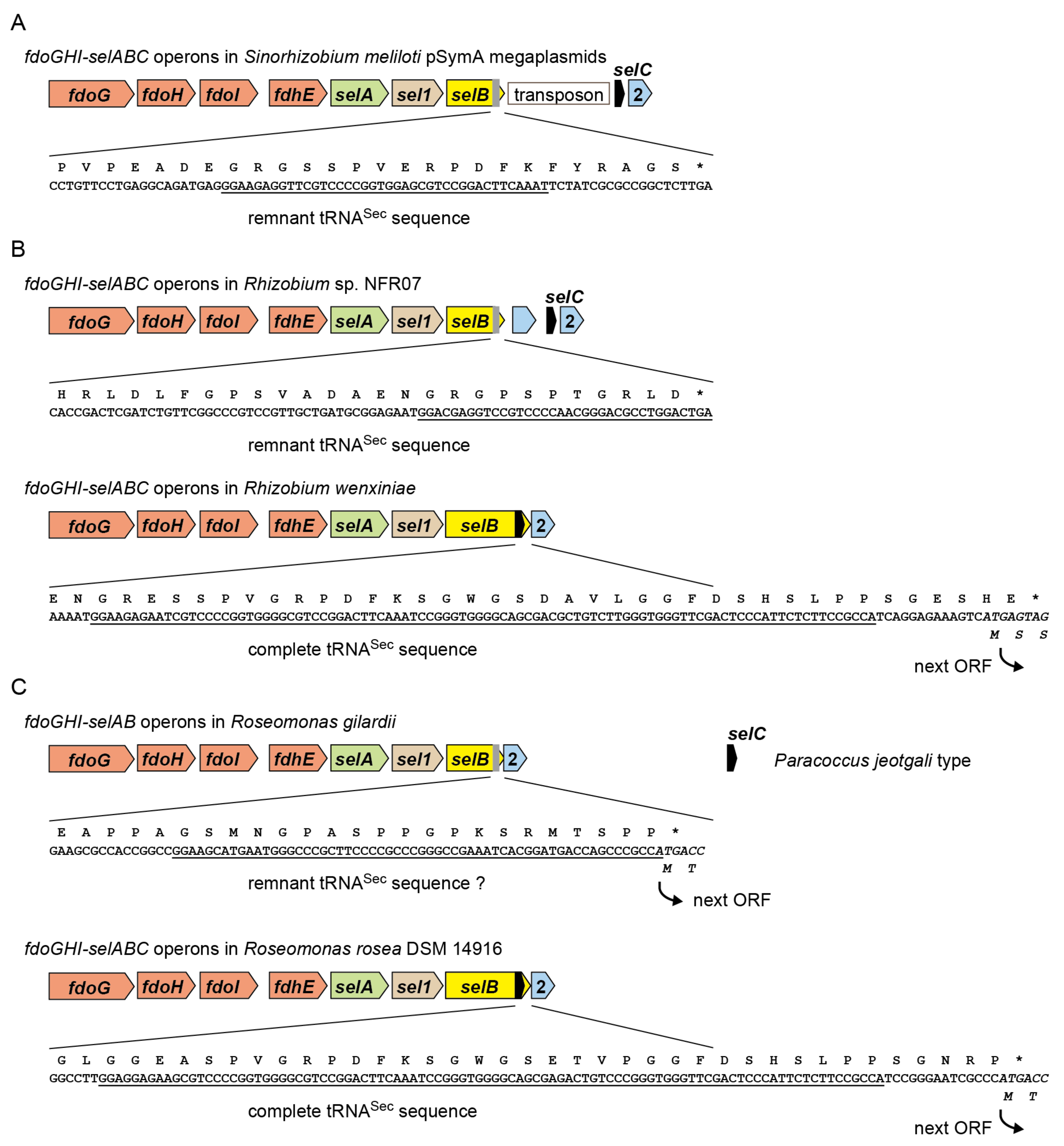 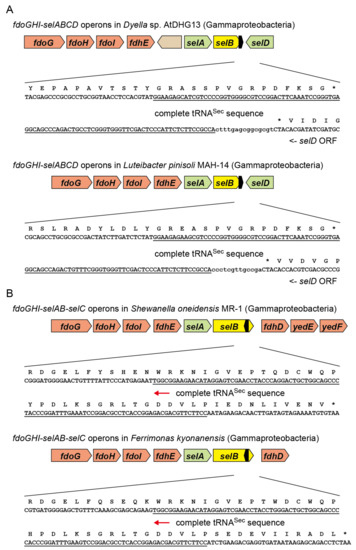 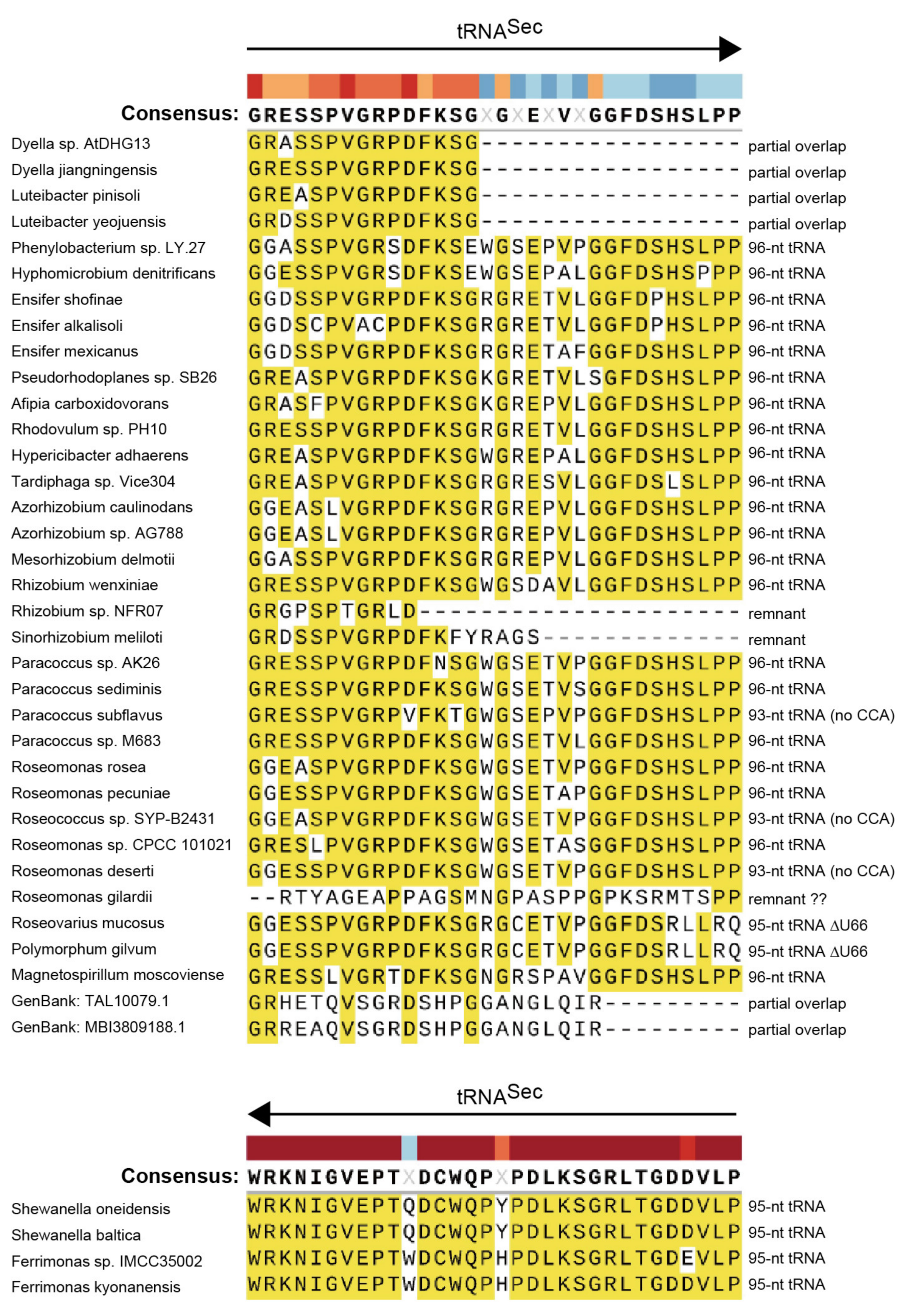