The authors wish to make the following corrections to paper “DNA Methylation Analysis Identifies Patterns in Progressive Glioma Grades to Predict Patient Survival” [1]:
In Figure 4C, the p-value for the Fn14 (cg00510447) box plot is incorrect. Figure 4 should be replaced with the following figure (Figure 1).
In Figure 6, the methylation status requirement shown in the schematic diagram is reversed but the subsequent analysis is not impacted. Figure 6 should be replaced with the following figure (Figure 2).
In the main text, there was an error in Paragraph 1, 3rd sentence of Section 2.1. The definition of hypo- and hypermethylated CpG sites outputted from the differential variability analysis is an inexact description. A correction has been made to this as presented below:
In the comparison between Grade II and Grade III gliomas, 2095 and 146 CpG sites (1.54 × 10−10 ≤ p-value ≤ 0.00062, 2.75 × 10−5 ≤ false discovery rate (FDR) ≤ 0.05) were methylated at a consistent level in one glioma grade, while the other glioma grade shows hypo- or hypermethylation variability (Figure 1A).
The authors apologize for any inconvenience caused and state that the scientific conclusions are unaffected. The original article has been updated.

J.W. is an employee of Ilumina, Inc. but declares employment does not cause any conflict of interest. N.S. has no conflict of interest. The funders had no role in the design of the study; in the collection, analyses, or interpretation of data; in the writing of the manuscript, or in the decision to publish the results. 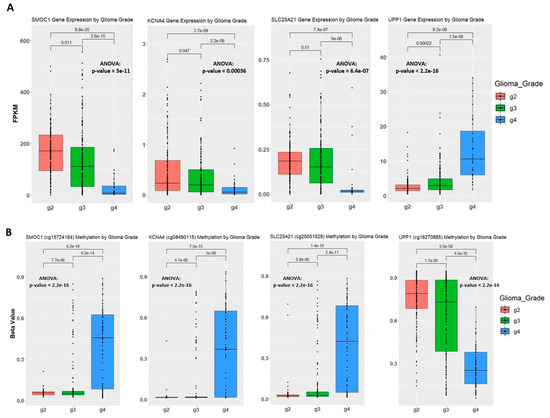