The RARγ Oncogene: An Achilles Heel for Some Cancers
Previous Article in Special Issue

Acute Intermittent Porphyria: An Overview of Therapy Developments and Future Perspectives Focusing on Stabilisation of HMBS and Proteostasis Regulators

S100B is an astrocytic extracellular Ca2+-binding protein implicated in Alzheimer’s disease, whose role as a holdase-type chaperone delaying Aβ42 aggregation and toxicity was recently uncovered. Here, we employ computational biology approaches to dissect the structural details and dynamics of the interaction between S100B and Aβ42. Driven by previous structural data, we used the Aβ25–35 segment, which recapitulates key aspects of S100B activity, as a starting guide for the analysis. We used Haddock to establish a preferred binding mode, which was studied with the full length Aβ using long (1 μs) molecular dynamics (MD) simulations to investigate the structural dynamics and obtain representative interaction complexes. From the analysis, Aβ-Lys28 emerged as a key candidate for stabilizing interactions with the S100B binding cleft, in particular involving a triad composed of Met79, Thr82 and Glu86. Binding constant calculations concluded that coulombic interactions, presumably implicating the Lys28(Aβ)/Glu86(S100B) pair, are very relevant for the holdase-type chaperone activity. To confirm this experimentally, we examined the inhibitory effect of S100B over Aβ aggregation at high ionic strength. In agreement with the computational predictions, we observed that electrostatic perturbation of the Aβ-S100B interaction decreases anti-aggregation activity. Altogether, these findings unveil features relevant in the definition of selectivity of the S100B chaperone, with implications in Alzheimer’s disease. View Full-Text
Keywords: protein interactions; molecular dynamics; docking; chaperones; protein aggregation; amyloids; protein folding diseases protein interactions; molecular dynamics; docking; chaperones; protein aggregation; amyloids; protein folding diseases
►▼ Show Figures 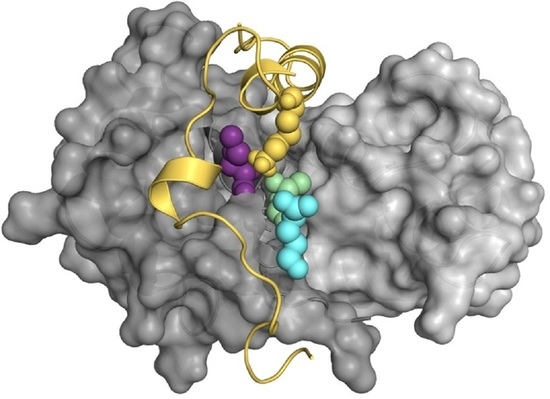