The Agonist Action of Alkylphenols on TRPA1 Relates to Their Effects on Membrane Lipid Order: Implications for TRPA1-Mediated Chemosensation
Next Article in Special Issue

Pharmacotherapy of neuropathic pain is still challenging. Our earlier work indicated an analgesic effect of dimethyl trisulfide (DMTS), which was mediated by somatostatin released from nociceptor nerve endings acting on SST4 receptors. Somatostatin release occurred due to TRPA1 ion channel activation. In the present study, we investigated the effect of DMTS in neuropathic pain evoked by partial ligation of the sciatic nerve in mice. Expression of the mRNA of Trpa1 in murine dorsal-root-ganglion neurons was detected by RNAscope. Involvement of TRPA1 ion channels and SST4 receptors was tested with gene-deleted animals. Macrophage activity at the site of the nerve lesion was determined by lucigenin bioluminescence. Density and activation of microglia in the spinal cord dorsal horn was verified by immunohistochemistry and image analysis. Trpa1 mRNA is expressed in peptidergic and non-peptidergic neurons in the dorsal root ganglion. DMTS ameliorated neuropathic pain in Trpa1 and Sstr4 WT mice, but not in KO ones. DMTS had no effect on macrophage activity around the damaged nerve. Microglial density in the dorsal horn was reduced by DMTS independently from TRPA1. No effect on microglial activation was detected. DMTS might offer a novel therapeutic opportunity in the complementary treatment of neuropathic pain. View Full-Text
Keywords: TRPA1; somatostatin; SST4; dimethyl trisulfide; neuropathic pain; partial ligation; sciatic nerve; RNAscope; microglia TRPA1; somatostatin; SST4; dimethyl trisulfide; neuropathic pain; partial ligation; sciatic nerve; RNAscope; microglia
►▼ Show Figures 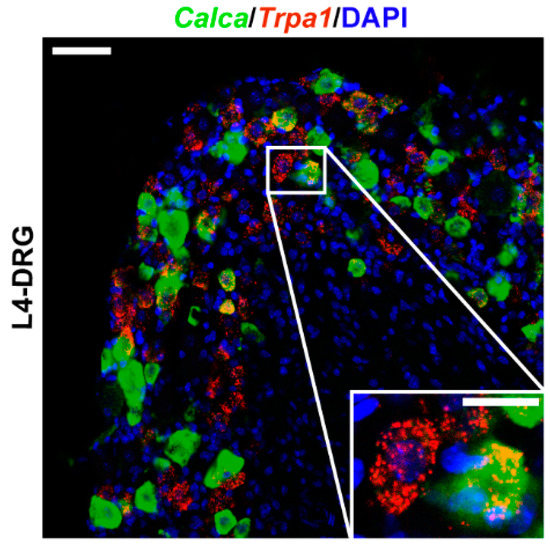