5-Fluorouracil (5-FU) is a cornerstone drug used in the treatment of colorectal cancer (CRC). However, the development of resistance to 5-FU and its analogs remain an unsolved problem in CRC treatment. In this study, we investigated the molecular mechanisms and tumor biological aspects of 5-FU resistance in CRC HCT116 cells. We established an acquired 5-FU-resistant cell line, HCT116RF10. HCT116RF10 cells were cross-resistant to the 5-FU analog, fluorodeoxyuridine. In contrast, HCT116RF10 cells were collaterally sensitive to SN-38 and CDDP compared with the parental HCT16 cells. Whole-exome sequencing revealed that a cluster of genes associated with the 5-FU metabolic pathway were not significantly mutated in HCT116 or HCT116RF10 cells. Interestingly, HCT116RF10 cells were regulated by the function of thymidylate synthase (TS), a 5-FU active metabolite 5-fluorodeoxyuridine monophosphate (FdUMP) inhibiting enzyme. Half of the TS was in an active form, whereas the other half was in an inactive form. This finding indicates that 5-FU-resistant cells exhibited increased TS expression, and the TS enzyme is used to trap FdUMP, resulting in resistance to 5-FU and its analogs. View Full-Text
Keywords: colorectal cancer cells; drug resistance; 5-Fluorouracil; thymidylate synthase; exome sequencing colorectal cancer cells; drug resistance; 5-Fluorouracil; thymidylate synthase; exome sequencing
►▼ Show Figures 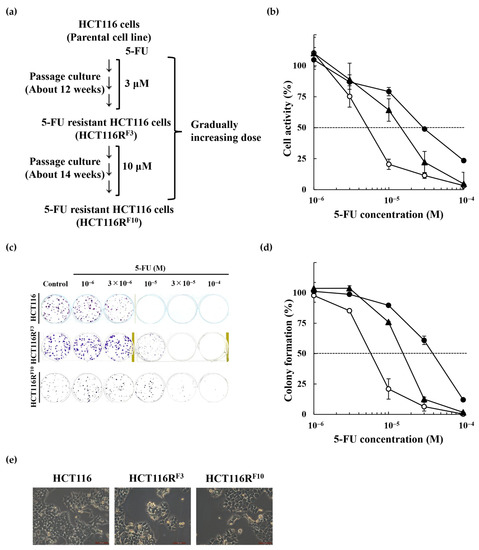